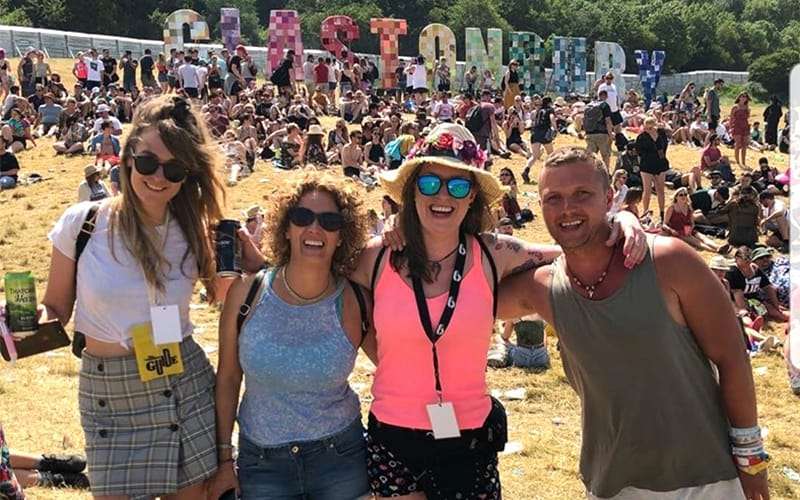 Well, what can I say? I really can’t believe that I’ve been blessed with playing, what is in my opinion, the greatest festival in the world: Glastonbury.

This will be the 3rd time I’ve returned to perform and I love doing it, for obvious reasons.
I used to attend the festival years ago – as well as any others I could get to, and, to be honest, the whole thing was a bit of a blur. I overdid it for sure, but that’s another story.
I’m pleased to say that I got my life together a few years back and I now do the festival sober.

If there’s one thing I can tell you, it’s to go and watch the acts on the smaller stages. I’m not saying this to convince you to come and watch me, but because there are so many little stages there and so many amazing musicians you won’t have heard before! So, if there’s a main act and you only like one of their songs, or your mates like them and you don’t; you can do much worse than go for a stroll. You could watch an act or two you’ve never seen before that aren’t so big and you never know, you may stumble across the next big thing to tell your friends to listen to. Or the glow you get when the little band or act that you discovered prompts them to say “who’s this?” in your car when you put it on.

If you follow any of the festival forums and pages you’ll see people griping about who is headlining. I think music is subjective and there are plenty of MASSIVE acts I don’t enjoy, so maybe go and find something new, as you’ve probably heard Oasis, The Killers, Fleetwood Mac over and over again! Yes, it would be great to see them on the pyramid stage but if it is someone you are not into, maybe go check out a small stage rather than someone you “kinda don’t mind” just because they’re a big act.

I had a fellow glass ceiling musician point out that the stage I’ll be performing on is a “small” stage. I naturally asked “why, what stage are you playing? What stage have you played?”.

The thing is, I’ve found that as a performer you push yourself more and opportunities present themselves through constant gigging and hours writing and recording, and sadly those people and friends who once supported you tend to stop. Whether it is because you come across as believing your own hype or possibly the social media side of things might look like shameless self-promotion for those who know you.  I don’t know, but I see many local acts to me decry the lack of support they receive and dwell on that.

As a performer I would say ignore this, go play everywhere and do not rely on friends and that small-town hero relevance. Remember to enjoy it, as not many things allow you to travel around on adventures meeting random people in this way.

The biggest bonus for me when playing a small stage at Glastonbury, is that I perform to new people; and there’s nothing like a seasoned music fan at a festival stopping and saying “wow I loved that” to you. Connecting with them is the pinnacle of it for me; both as a performer and as the music fan finding brand new music in the same way.

My recommendation to you (who I found in 2019) is Mik Artistik.