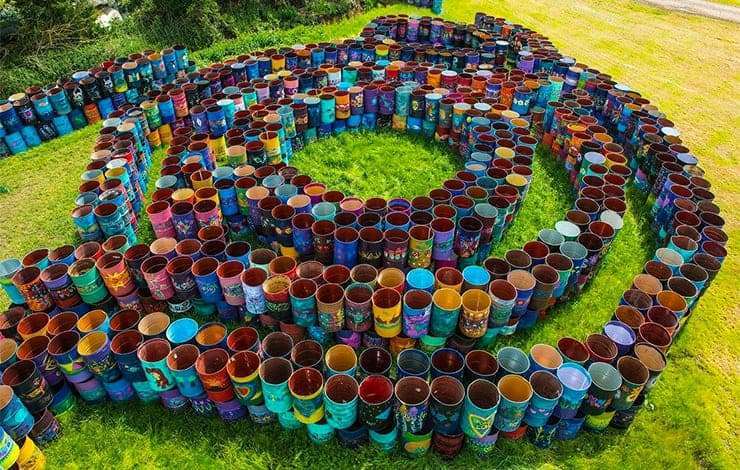 Meet the people, the process and the history behind the creation of Glastonbury’s painted bins…

While most of the focus usually tends to be on the line-up announcements, building progress of the main stages and new areas – there are also loads of additional jobs that usually take place down on the Farm out of the ‘spotlights’, in preparation for each edition of Glastonbury Festival.

Every Glastonbury-year, approximately 200,000 people (which includes festival-goers and staff alike) produce an incredible amount of rubbish throughout the festival weekend. One of its greatest successes is the Festival’s strategy for dealing with refuse. An integral, essential part of this approach is Glastonbury’s rubbish bins.

45-gallon drums that in a previous life held mostly fruit juice concentrate, provide the receptacles for food waste, cans, glass (which is not permitted on-site) and all other waste, with each type of content being defined by a clearly labelled plastic top held in place with an elastic bungee.

During the winter months, these bins spend their lives piled up in an almost pyramid-like, long stack, up at the top end of site patiently waiting for the (hopefully glorious) summer months to come back around, in order that they can once again find purpose in their rubbish lives (excuse the pan!).

For those bins which don’t survive the winter (or two, in the case of a fallow year), and get bent out of shape or grow sharp rusty edges – they will be reincarnated into a different life after the short trip to the scrapyard, and be replaced by shiny smooth, new bins delivered by the articulated lorry load in the two-month run-up to the event.

There are many stories of bins turning up in the most amazing of locations outside of the Festival site and around the world as if by magic as people steal them and take them on adventures. Believe it or not, Glastonbury’s bins have even made it into America’s Rock and Roll Hall of Fame as well as into the Glastonbury archive in the Victoria and Albert Museum.

Roughly 14,000 bins are painted or repainted every year, with two groups of bin painters in charge of painting them all.

Bin painting has been a part of Glastonbury since the mid-80s – The story goes that there was a lady back then that needed containers for flowers. Several bins were then cut in half and flowers were put in them to decorate the main stage. Glastonbury founder Michael Eavis noticed the painted and decorated bins and decided to have them across the site.

The legendary site artist Hank, who has been to every single festival held on Worthy Farm since its inception, was the first-ever bin painter to be asked by the great Michael Eavis himself to paint the bins. Hank heads a group of about 15 professional artists who live on site from April till the Festival kicks off – they work day in day out for months painting very detailed bins for the kidzfield, Green Peace, backstage & VIP areas among others.

Matthew Smith, who has been working on the bins for at least 15 years and has known Hank ever since they first became friends in 1989 – says the festivals of today are a far cry from what they were in the 60s, 70s and 80s; before the criminalisation of the culture in the 90s and the subsequent relicensing process that spawned the event industry that is so successful today.

Smith goes on to describe how he first got to spend two months shooting the Festival as a green student whilst studying for a degree in photography.

“Although the actual process is something of a closely guarded secret, it goes something like this,” says Smith – “Each old bin gets a bit of a rub down with a wire brush and a new base coat in flat or blended colour, while the new bins might get a bit of a key before base coating, but they don’t normally need it. Once the bin is dry; a fact that makes the whole process very weather dependent as the job goes on rain or shine or mighty hailstorm, it goes to the illustrators to have its design painted. Once again the bin needs to dry before being exposed to the elements and storage outside.

“Storage these days takes the form of an ever-expanding organically developed gallery arrangement taking the form of a maze built around a central circle echoing the shape of the bins and their recycling purpose. The maze evolves every day as more output is generated with the initial circle being surrounded by walkways, dead ends and extra rooms, until the point in time comes when the delivery process begins.

The bins are then loaded onto a tractor-trailer and taken out into the fields a couple of weeks before the public arrive, which makes the maze a very temporal Glasto art installation that the public never get to see. Content in the maze is edited as each bin is carried and placed by hand. This gives prominence to the best bins that get a place in the sacred centre, or on the top shelf, which also makes them easier to document as individual pieces of artwork in themselves.

Each bin is a signed collaboration between base painter and individual artist.  The people who make up the team vary from year to year with a few long term members, together with an assorted diversity of guest painters and kids who come along to paint for the day or just hang out and do something creative while their parents are at work on site while we keep a careful eye on them. It is a bin mantra that once you have painted a bin you become a binnie; and once a binnie, always a binnie… for life.”

Special mention must also go out to Alice Malice mistress of the naughtiest of bins, Lenka Jankova, Guy Burger, Carly Darnell, Marina Capriotti and of course to Taff; Lenkas ex-boyfriend, Ayeshea’s Dad and massive festival character and friend who left the team some years ago to hang out, cow watch and play amazing guitar in that great festival in the sky with the stinkiest socks on the planet.

The second group of bin painters is headed by Dan Tastic Glastonbury (yes, he changed his name officially!) who is in charge of 80 volunteers split between 8 team leaders – painting 30-50 bins a day, each. They paint the bulk of the rest of the bins & benches across the site for the three weeks running up to the Festival.

Dan aka Glastonbury Jesus started Charity Bins in 2011 – he and the group of volunteers paint 100 personalised bins every Glastonbury-year for anyone kind enough to make a donation to CARE International UK. Over the last 8 years, Dan and the team have managed to raise over £15,000 for the charity, which in other words, means there are people alive today thanks to Glastonbury’s Charity Bins.

Once each of the Charity Bins has received its personalised painted design, Dan will then go ahead and tweet out a pic of the bin and its location on site. CARE is a major international humanitarian agency delivering emergency relief and long-term international development projects. 2022’s 100 bins have all been sponsored, with 123% of the target being achieved!

Dan says favourite design requests include Michael Eavis on a fire breathing badger & a narwhal rave, with some families having had a bin every year since he started back in 2011.

In 2017 Dan proposed to his girlfriend Emily (who he met through bin painting and while being her boss) on the Gateway Stage in the Theater & Circus fields – The couple eventually got married on the same stage at the 2019 edition of the Festival.

Apart from bringing people together and sparking the creative minds of the masses, do not be mistaken – these are functional bins. They are continuously emptied out throughout the entire festival by a hard-working group of crew labourers, while another section of equally hardworking crew meticulously sift through all of the minging, smelly contents up in the recycling centre in order that the refuse is dealt with efficiently.

Let us take this opportunity to thank Matthew Smith who contributed greatly to this article with his deep insight into the bin painting process and the ‘binnie life’ as a whole, not to mention his outstanding photos.

A big thank you also to Daniel Glastonbury for all the input and the admirable work he does with Charity Bins and Care International UK.

Glastonbury’s brightly painted rubbish bins are now firmly part of the Festival’s visual branding with a rich history… and an even greater future.