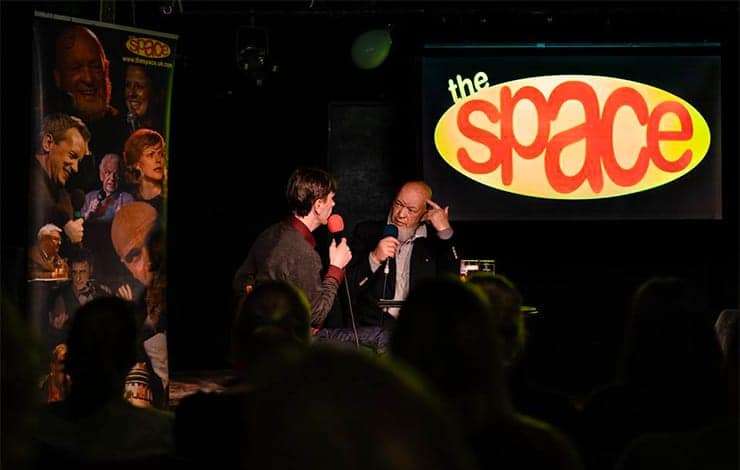 I was looking forward to having Michael Eavis at our regular and intimate gathering in Brighton on April 4th. He was actually a guest at The Space twice before; first in January 2009 and then five years ago this month, in April 2014. So, I kind of knew what to expect and that he would be very popular. As before, he was warm, funny, quirky and jolly. Other than a phone interview for hospital radio in the nineties, this was my first interview with Michael, in-person, anyway. The Space events are held in a fairly small venue, the Latest Music Bar. So the audience weren’t too far away from the small stage where we sat for the interview; well, it was, as with all at these events, an informal conversation.

Early in the interview, he remarked how pleased he was that I met him at the train station in the afternoon. Well, it occurred to me that it would have been a good thing to do, a positive gesture, as it were. We began the interview discussing some of the music, artists and songs that he particularly liked when he was much younger. He was really fond of jazz, folk, blues and some rock and roll, especially Elvis Presley. I reminded him that he sang some Elvis a few days before, in a pub local to him. Music clearly is something that he always loved. He aims to see as much live music as he can, wherever he may be. A few days before, as Michael told us, he saw a band at a small Edinburgh-based venue. He thought they were fantastic, but didn’t know what they’re called. When he finds out, he told us, he’ll track them down and get them to play one of Glastonbury’s many stages.

As some readers of this will know, Marc Bolan’s T. Rex headlined the first festival that he put on. Bolan wasn’t pleased that he couldn’t afford to pay him, but arranged to pay him £100 a month for five months, which he did from proceeds of the farm. Michael took over running Worthy Farm aged nineteen, after his dad died. He told us that, despite the festival’s status and popularity, it’s the farm that is more important to him. Being a farmer has been a huge part of his life for fifty-five years.

Talking to someone like Michael, it’s somewhat inevitable that some questions and topics he would have heard many times before – one being of acts that haven’t yet played at Glastonbury, who he’d like to get. I mentioned Fleetwood Mac and he said that they wanted four million pounds. Some of the audience and I found that astonishing. Although I watched on TV, a relatively new act I really enjoyed two years ago at the festival was Christine and the Queens; they’re also playing this year. He recalled how Christine, or now known as Chris, bumped into him and said, “Ah, are you that farmer that I’ve heard about?”

As we know, there’s much more to Glastonbury than just the music. He spoke about its other attractions, including the new feature of a Victorian pier, which will actually be sixty metres long. From what I saw online, there’s some resemblance to Brighton’s very own West Pier, or what’s left of it.

When I asked about the amount of planning for each festival, he said that it’s continuous, literally all year round. I also asked if they yet have any headliners booked for next year – he told me that they have two booked. I was surprised that they’re able to get big acts this far in advance. Of course, so many acts of all sizes want to perform at Glastonbury at some point, so, if available, they would commit. He wouldn’t reveal anything of their fiftieth-anniversary plans, so no big exclusives for us.

Michael did reveal that Hawkwind are playing the Acoustic Stage this year, to the surprise and delight of some in the room. He also said that Rickie Lee Jones will play that stage. The American singer’s best known for the rather lovely forty-year-old hit Chuck E’s in Love.

As I said to him, Michael is now as famous as most of the performers. When asking him how he feels about the fame and recognition, he said that he doesn’t mind it. I think he likes the attention he gets. What can someone in his position say about it? He’s definitely largely viewed in a very positive way and highly respected.

As with every event, we end with a raffle draw. He seemed to enjoy picking out each ticket from the ice bucket. The last prize was a Stanley Donwood print for Glastonbury from 2016. Stanley, a guest last year, signed it and the lucky, very pleased winner got Michael to also sign it. It was really enjoyable interviewing Michael and it was clear to see that the audience loved him.

A thing I like about him is that he shows a genuine interest in other people that he comes across, whoever they may be. After the event, while waiting for his cab, we had a bit of a chat at a small table in the venue, in which he asked various things about my life. At least in my experiences with him, Michael Eavis is good, engaging and warm company. He is also a legend, of course.