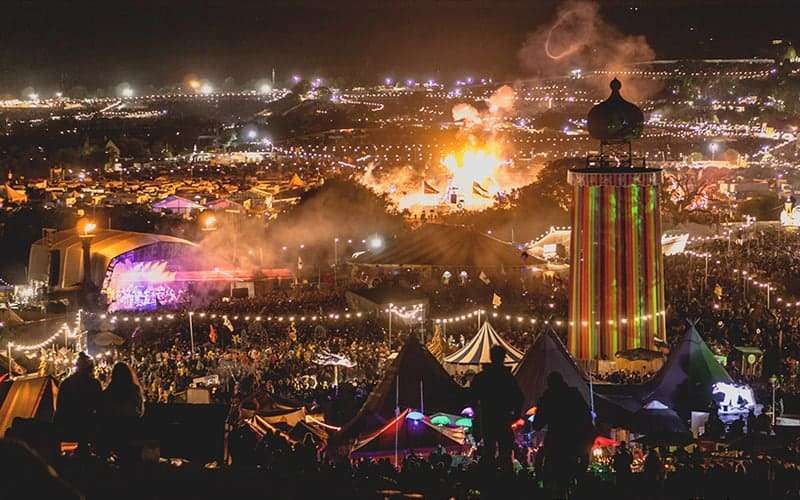 I resisted going to Glastonbury for a long time. It seemed like mud multiplied by 100,000 multiplied by camping; both things I detest. I attended my first Glasto almost by accident, Seetickets were selling passes to the festival the day before (!) in 2008 because it hadn’t sold out (!!) – the year that Jay-Z headlined. Many of my friends were already at the festival when I purchased my ticket on a whim – I still have the confirmation email! Tickets were £160 plus £4 transaction fee pick up at the festival. I remember I trekked down after work and even was wearing my blazer jacket at the festival. My only item I took with me were a pair of wellies that I binned at Castle Cary station on the way out.

Jay-Z ended up being the first Glasto headliner I ever saw. I remember the gasps and appreciative cheers when he opened with Wonderwall. It was the only song of his set I saw, I was just passing through the Pyramid stage to get to the Other Stage. Since then, I’ve been to most of the Glastonbury Festivals and I’ve been very lucky to have attended so many times. Lately, I’ve even been granted a photo pass and it’s enabled my appreciation of the festival to reach an even bigger level.

Every year just gets better and better; it really is the friendliest festival and I’ve been to most of them around the world. Coachella is sunny but is so far removed from the Glasto experience that it’s insulting to talk about the two in the same sentence. Most festivals around the world are the same, some stage is literally plonked in the middle of nowhere with a few food and drink stalls down the sides. Not Glasto. It really is a city that lives and breathes its own citizenship. I’ve made so many friends at Glastonbury just by people being approachable and friendly and turning to you and chatting. All of the stage directors and crew behind the scenes are fantastic too and really lovely and helpful. There’s so much to do at the site that you end up doing at least 30,000 steps a day, which is very difficult if it’s pouring down and muddy and you are in wellies. Lately, I’ve been staying in Worthy View which takes another notch of fitness.

Everyone has their own Glastonbury itinerary and experience and that’s what makes it incredible. You can miss the main two stages and still see a fantastic variety of acts. I’ve experienced both ends of the extreme weather. I think 2016 was so treachourous with the rain and mud, and Brexit vote had just compounded the misery (was still an amazing festival) and last year was so hot and to be able to walk around in Converse all weekend was like being in Paradise (Or Shangri-La) . I came back with a suntan which used to be unheard of.

Two of the biggest crowd crushes I’ve experienced have both featured Coldplay, in 2011 and 2016 both times being rammed down the front of the Pyramid Stage..I think that’s the busiest crowd I’ve seen aside from maybe Kylie Legends slot last year… There have been many, many other highlights… Seeing Barry Gibb surprise duet with Coldplay was incredible, followed by his Legends slot the next year. One of my fave shots is Foo Fighters after their triumphant headline set pointing up at the fireworks over the Pyramid Stage.

Another random surprise was Bradley Cooper emerging unannounced to shoot some scenes for A Star Is Born; I caught some great shots out of luck as I was waiting to watch Kris Kristofferson. Considering the heritage of the festival, was also amazing and very poignant to see Michael Eavis duet with Emily last year. I knew the 2019 was going to be a great festival and it’s been my favourite so far!

My most famous shot is of Glastonbury 2016 on the Saturday evening during Adele’s headline set. I am not an Adele fan so I ventured towards the top of the hills near the Glastonbury sign and managed to catch the sprawling metropolis of Glasto at its finest. People email me from all over the world asking to sell a print of that shot and so I’m thankful with the kind permission of Glastonbury Festival to offer a limited run of prints with all proceeds going to Glasto’s charities (see below).

I am bitterly disappointed that the 2020 festival didn’t happen – but I look forward to (touch wood!) the 2021 happening, and I’ll be even more delighted if Paul McCartney manages to headline! Glasto 2021 is keeping me going during the pandemic!

The ‘Glastonbury Festival Town At Night’ print – which will see all proceeds split between Water Aid, Greenpeace and Oxfam – is now available to order here.

Many other festival and rock prints are available at raphprints.bigcartel.com , and with code THIRDOFF you get a 33% discount off the entire order if you select any 3 or more items.