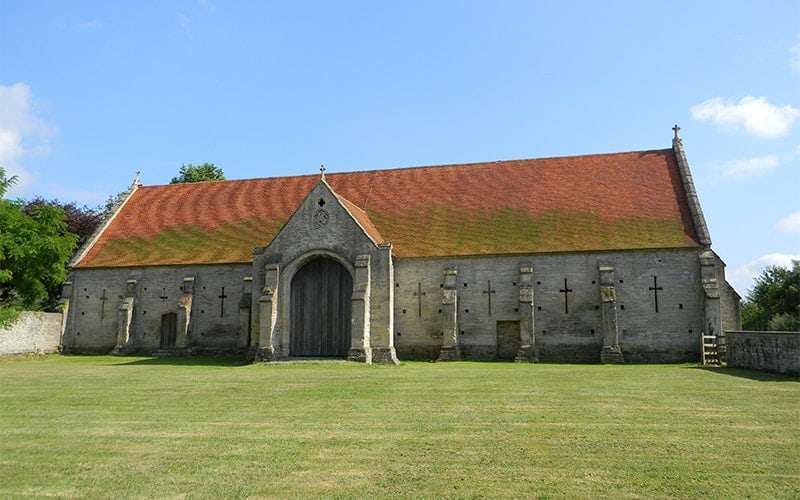 Pilton's medieval barn can be viewed by the public on most days throughout the year. (2014, Photo Credit: Joseph Rogers)

To Michael Eavis be the praise

In 2014, having been glued to the TV year after year enjoying Glastonbury coverage, Joseph Rogers decided to explore Pilton village and stumbled across the old medieval barn there. 6 years on, he prepares to release his latest book Tithe Barns which, along with hundreds of other barns across the UK, talks briefly about the Pilton barn’s connection to the festival and the Eavis family. Here, he expands on that connection and how the festival helped save the barn from ruin:

Over the last 50 years, the Glastonbury Festival can lay claim to helping a significant number of worthy causes, most notably Oxfam, Greenpeace and WaterAid, but during the late 1990s, when the likes of The Prodigy, Oasis and Blur were gracing the stages across Pilton’s Worthy Farm, the local village barn also benefitted from the event’s increasing profits.

The barn at Pilton, commonly referred to as the Tithe Barn, was built in around the 14th century by nearby Glastonbury Abbey to store produce that was farmed from land belonging to the Abbey itself. Tithes, a tax payment to the Church of one-tenth of a farmer’s produce, may have been stored in the barn in subsequent centuries, but little evidence supports this. The Tithe Barn title is likely to have come from the term being used frequently to describe many medieval barns during the 19th and 20th centuries. The barn was one of a number across Somerset built by the Abbey, with others at Doulting, West Pennard, and Glastonbury itself. At one time Glastonbury Abbey was responsible for up to one-eighth of Somerset as well as land in Gloucestershire, Dorset, Devon and beyond.

As a 700-year old landmark, the barn has played an important part in the history of the village and throughout was used for agriculture, even after the dissolution of Glastonbury Abbey in 1539. During the Second World War, it and surrounding farmland was used to help train the Women’s Land Army who farmed land across Britain extensively for the war effort, but disaster struck on 22nd June 1963 in the form of a lightning bolt, which ignited the partly thatched roof and caused a blaze that was seen from many nearby towns and villages.

A younger Michael Eavis, who would play in the barn’s rafters as a child, had been out milking cows that day and was one of the first to see the barn go up in flames. Little could be done about the fire, with an abundance of aged timber and thatch rapidly feeding the flames, but before the heat became too intense, he ran in to save a tractor that had been kept inside. The fire quickly raged beyond control and firefighters from as far as Taunton and Yeovil had to be careful laying water on the stone walls, which were in danger of exploding from the immense heat. Afterwards, the barn lay in ruin and Michael had decided that if he had the chance to one day repair the barn, he would.

By 1970, Somerset and popular music were becoming intimately close. Over in Wells, the Bishop’s Barn, built in around the 15th century to store tithes for the Bishop of Wells, was opening up to rock ‘n’ roll in the form of Slade, Status Quo and Supertramp, who played the venue atop old lorry trailers. Over in Pilton, the Eavis family were busy creating their own music scene following the success of a local Blues Festival near Bath and hosted the Pilton Pop Festival in September that year. Marc Bolan was one of the festival’s first acts. As time went on, the festival grew into a nationally, and then internationally, recognised music event drawing in hundreds of thousands of festival-goers, superstar musicians and extensive television coverage.

In 1995, Michael was in negotiation with the local Mendip Council over buying the barn, which remained roofless and exposed to the elements. After successfully buying it and some nearby woodland, he set about creating a charitable trust that would begin the process of restoring the barn as a community venue. Over the years, expert craftsmen were drafted in to recreate the lost timbers and rebuild the roof (this time entirely with tiles, not thatch) at a cost of over £700,000 with £240,000 coming directly from the festival. Work was complete by 2005.

In the festival’s 50th year, sadly curtailed with the global pandemic, the barn hosted an exhibition of posters and photographs spanning the history of the event and even had a stage erected out back to resemble the early days of the festival. Today, both the barn and the festival define Pilton’s history and certainly without the latter, the former could not be admired and appreciated as it is now. Of his many achievements, Michael Eavis cites the barn’s restoration as the one that he is most proud of.

Joe’s book Tithe Barns is released on 15th April 2021 by Amberley Books and describes the history of medieval tithe barns across the UK. It can be pre-ordered from Amberley Books directly, or online from major and independent book stores. Joe would like to thank those at the Pilton Barn Trust (charity number: 1064887), including Mr Eavis CBE, for their assistance with research for the book.