by Will Blomfield in honour of Robert Blomfield 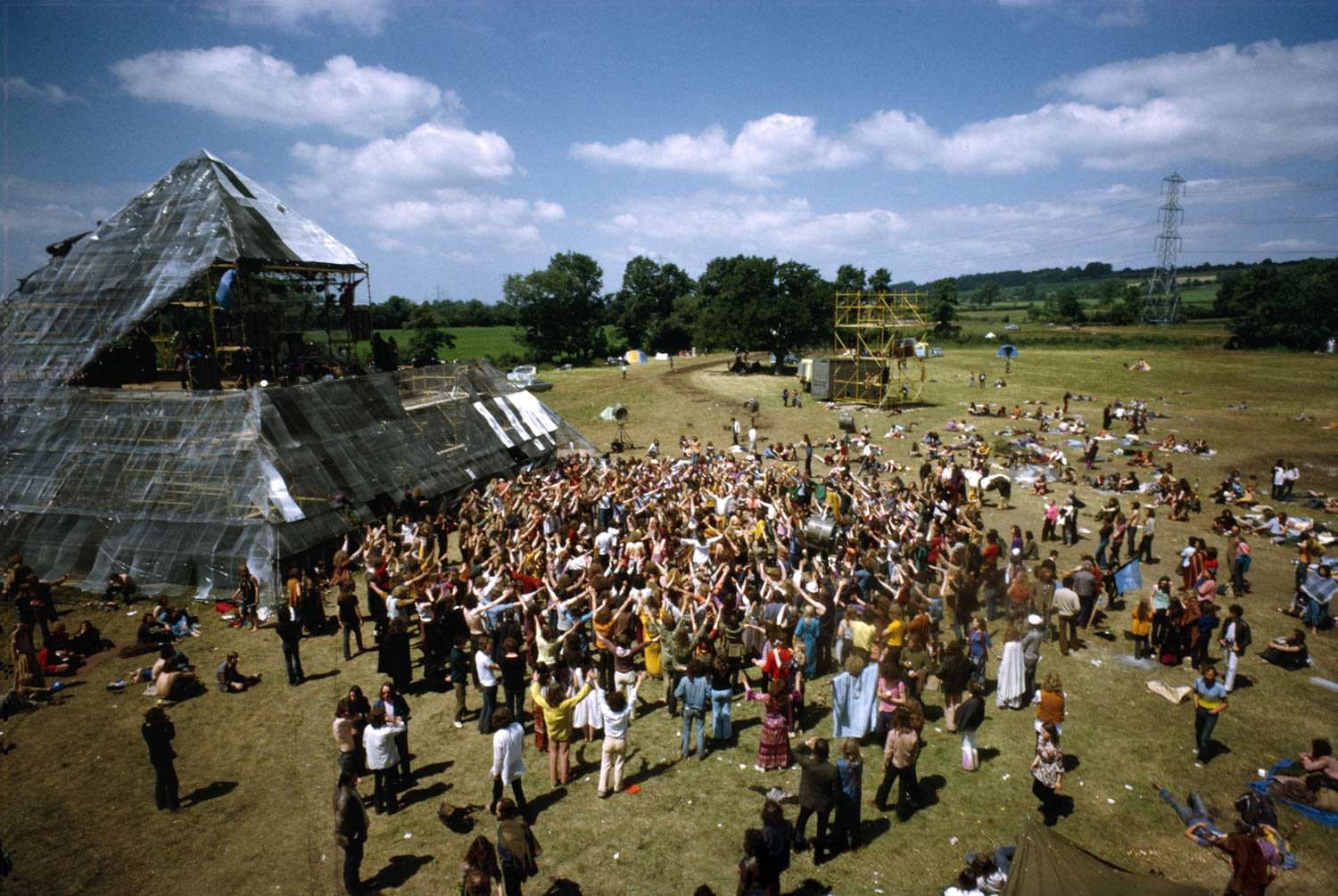 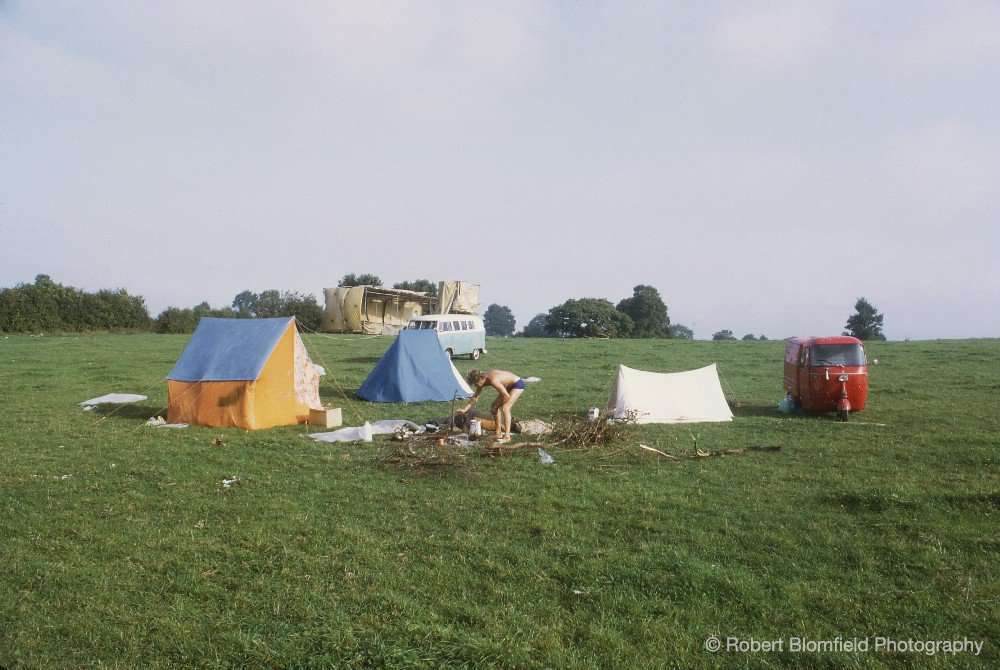 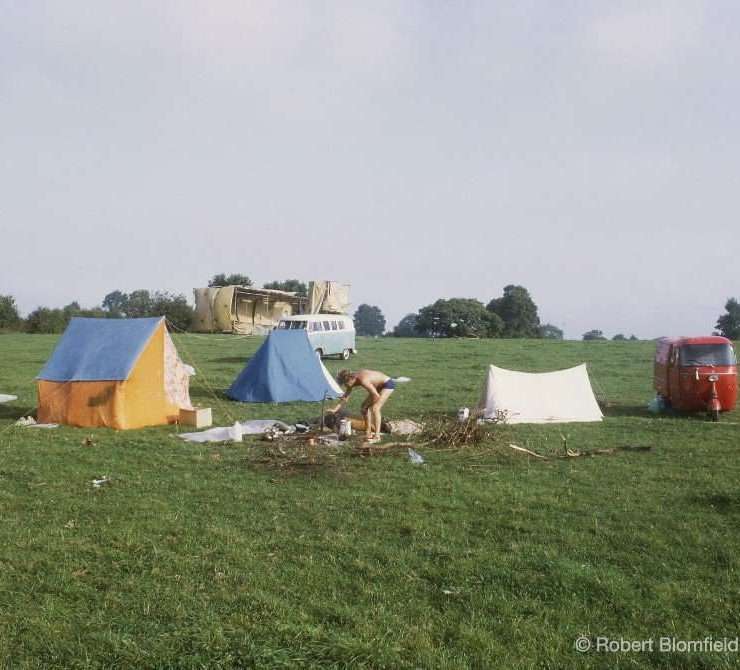 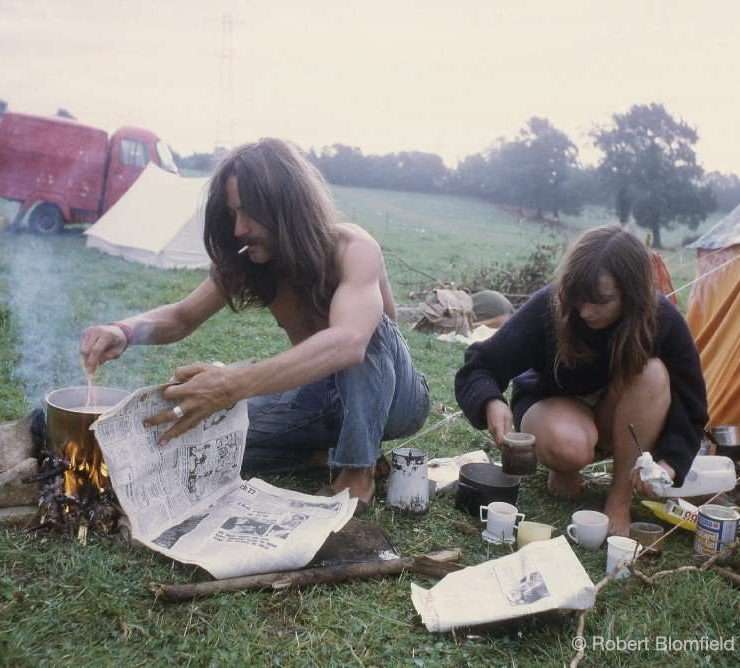 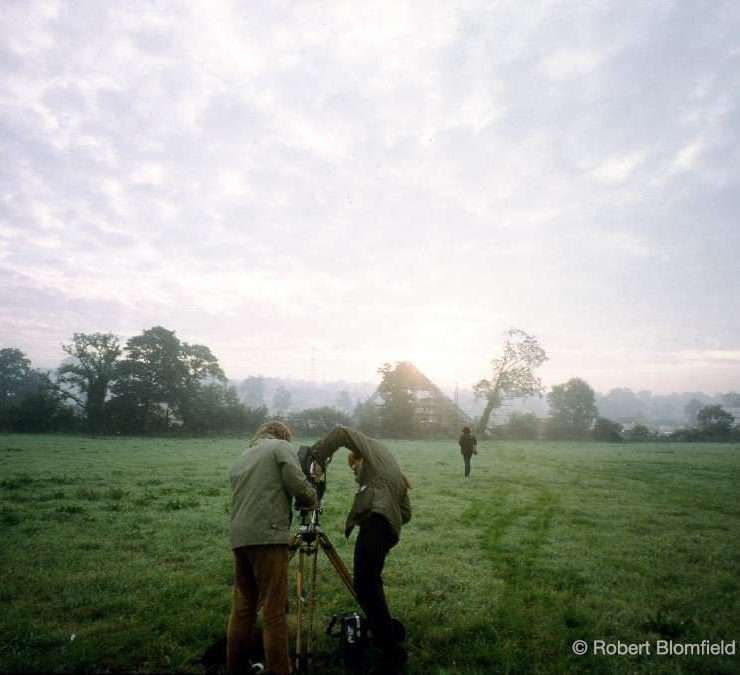 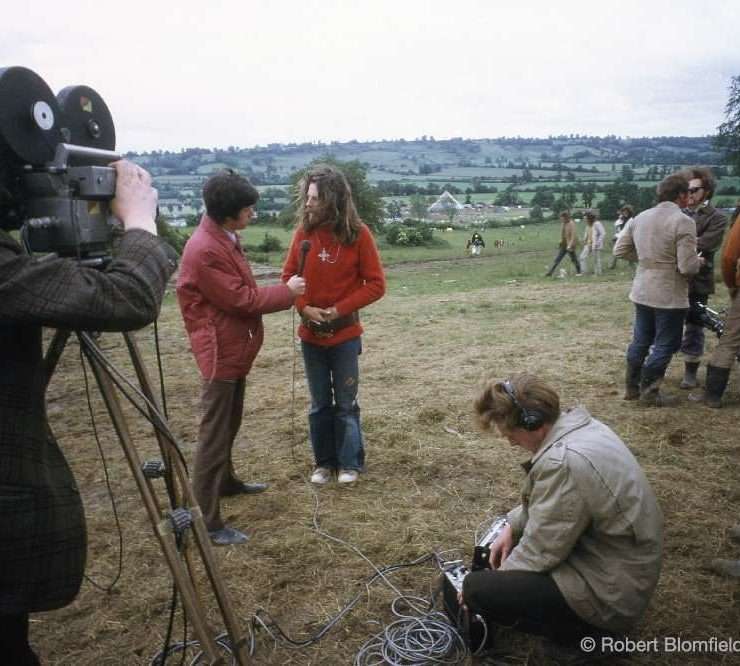 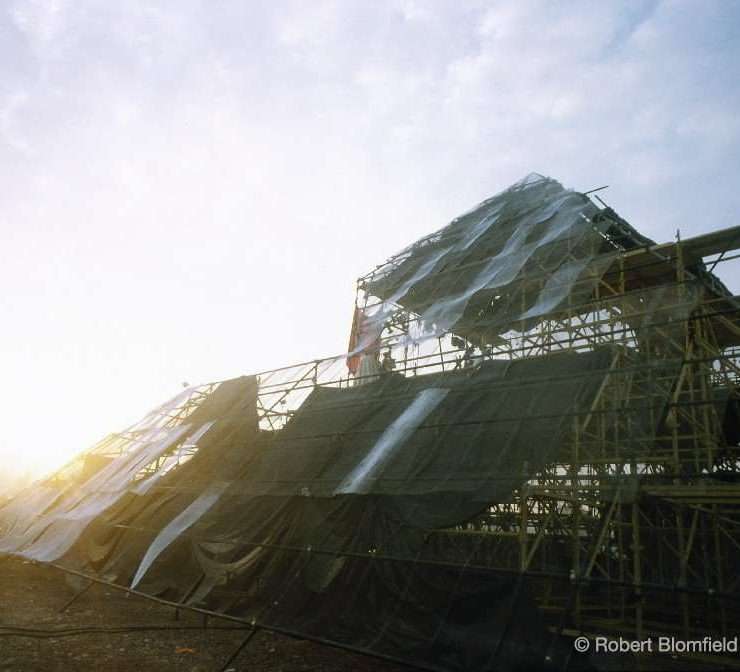 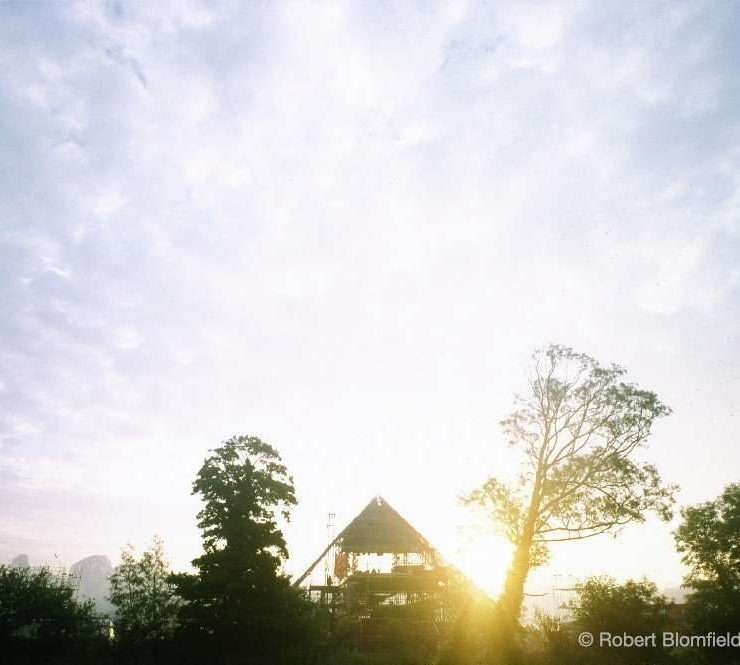 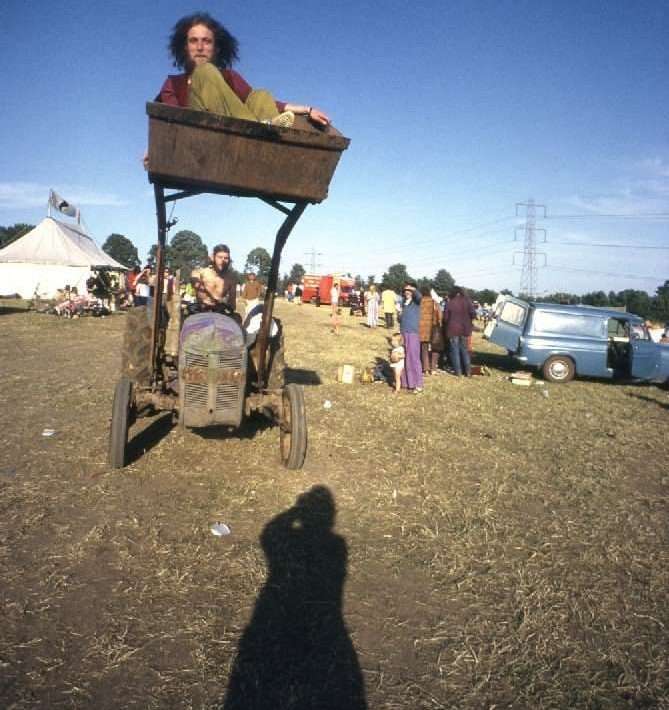 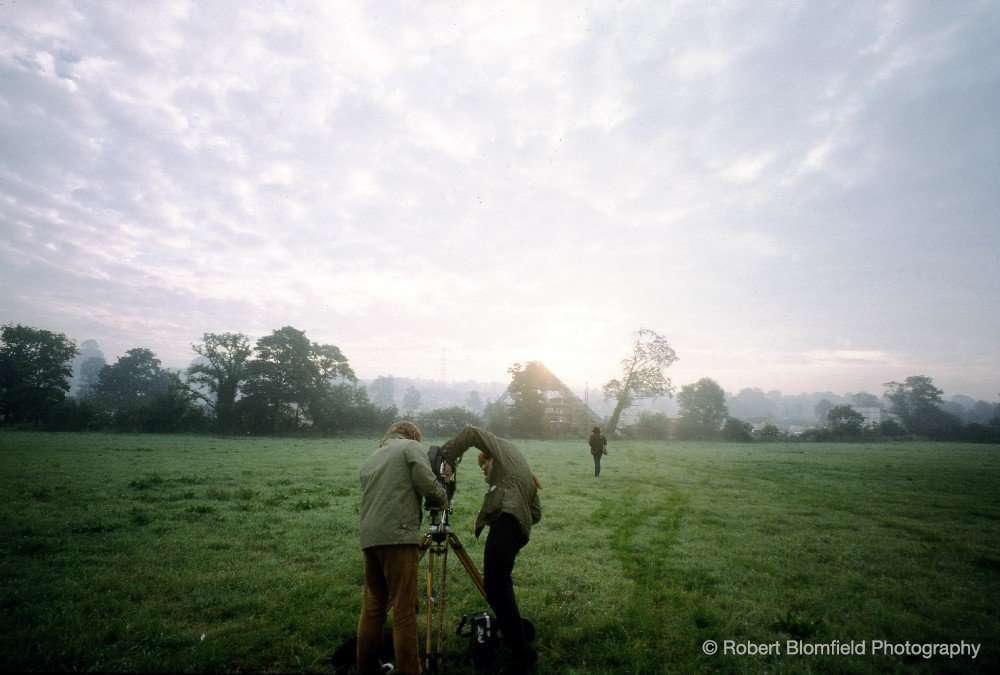 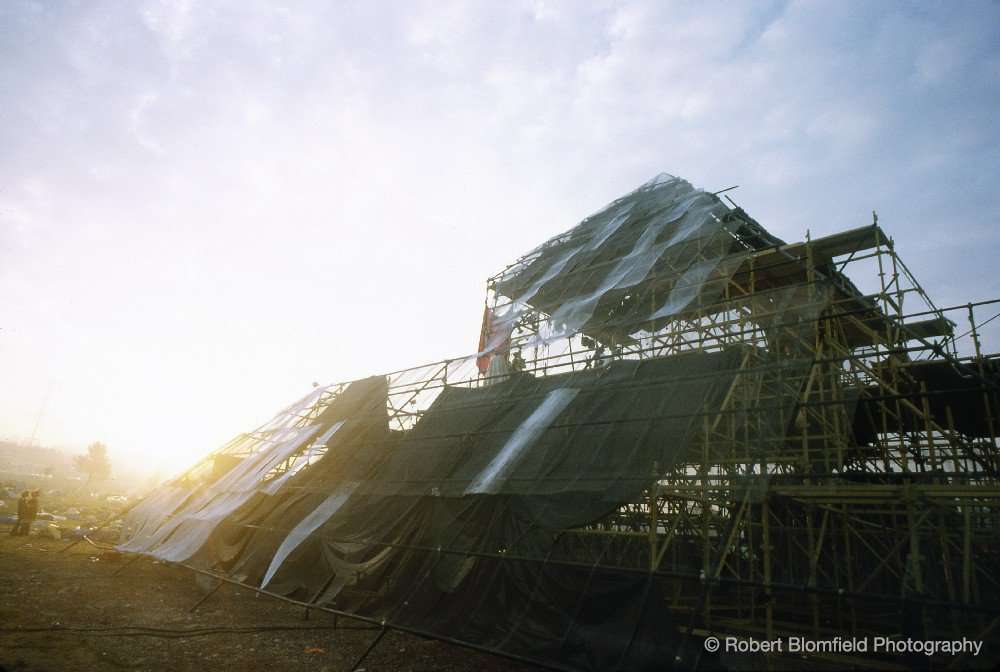 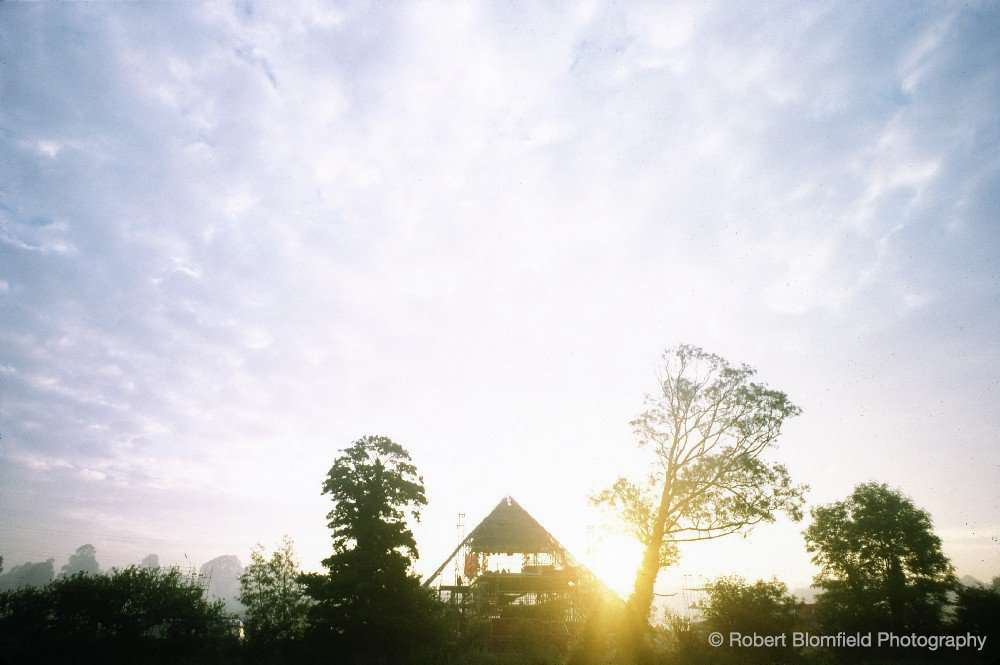 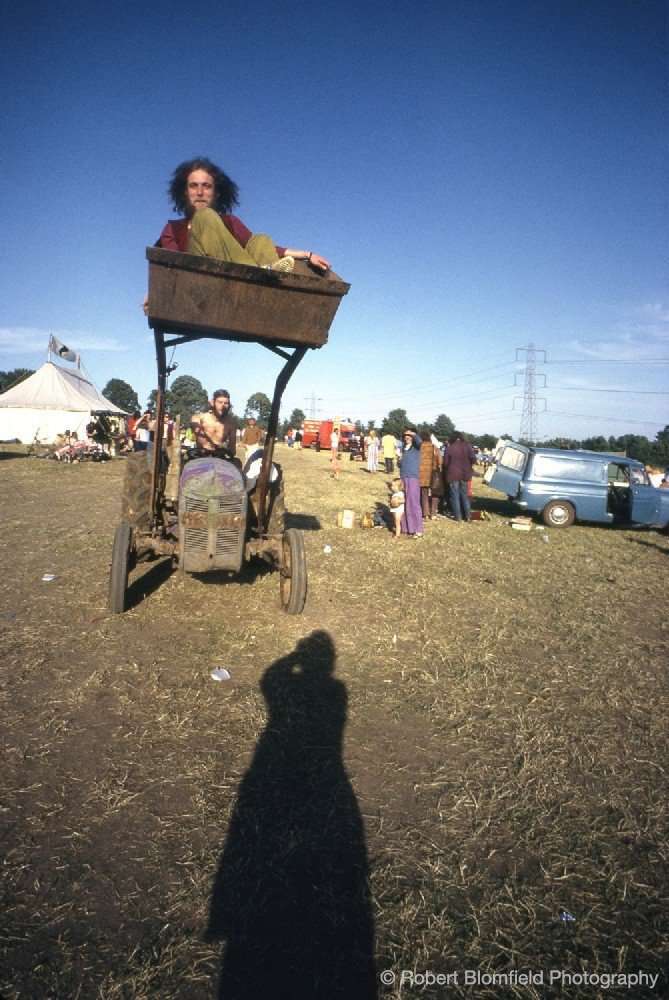 A priceless digital archive in the making

Apart from Michael Eavis, there can’t be many people who can claim to have been at the first 2 Glastonbury festivals and fewer still who can claim to have been celebrating their birthday on the day the very first Glastonbury (then known as the Pilton Pop, Blues & Folk Festival) kicked off on 19th September 1970. But here I am, clutching a balloon on my 2nd birthday with Pilton festival’s tiny scaffold stage in the background.

At that time my dad, Robert Blomfield, was a full-time doctor and a part-time hippy. He’d recently moved down from Edinburgh, where he had studied medicine, to London. My parents had picked up news of the Pilton festival on the hippy jungle drums circulating around the city; there were even rumours that Jimi Hendrix might play. Hendrix was indeed in London at the time but tragically died the day before the festival started – by a strange coincidence just a few hundred yards from where my parents were living in Bayswater.

Nevertheless, they made their way to Somerset in a borrowed, sky-blue VW Campervan, perhaps partially motivated by the low £1 entry fee and the offer of free milk to festival go-ers. By my dad’s account, the festival in 1970 was a bit of a non-event, just a rather plain-looking stage in a rather barren field. It was so low key you could even camp in the same field as the music so that’s exactly what my parents did – pitching up just a hundred metres or so from the stage.

The weather was kind for September and, despite the slight anti-climax, my parents must have enjoyed the experience enough to return with me the following year when the event was moved to June and renamed “Glastonbury Fair”. The stage was also transformed into the now iconic pyramid shape, while the music and entertainment proved rather more memorable – and indeed, photogenic.

Being so young, I don’t really remember either of these festivals but fortunately, I do have plenty of photos of them because Dad also just happened to be an amazing amateur photographer. It was a talent he’d first discovered aged 14, when he had borrowed his own dad’s camera and undergone an informal apprenticeship in developing and printing his own films. From that moment on he began to photograph everything around him.

The result is an incredible record of his life but also an archive of significant historical interest. From his student days, there are photos of children innocently playing in the shadows of Scotland’s crumbling old tenements; from Newcastle (where he worked as a junior doctor for a time) there are sideshow performers in eccentric town fairs; in London, he captured the melting pot of the swinging ’60s; and then there are the shots of his trips to the legendary festivals of the early 1970s, including Glastonbury and the Isle of Wight.

Initially, Dad shot on black and white film, which he painstakingly developed and printed himself, using makeshift darkrooms wherever he lived. By the time of the first Glastonbury, he had switched to colour slide film and so it was that he captured both of the first two festivals in glorious Kodachrome. While colour film was certainly more convenient than black and white (with all the attendant hassles of the developing process) it was expensive so still not widely used back then. Dad’s colour images of Glastonbury in 1970 could very well be unique – to this day I still haven’t seen any other colour images of that year’s festival.

By 1970, dad’s skills as what we would now call a “street photographer” were in their prime. Today’s ubiquitous camera phone means we are free to shoot photos and videos almost without thinking but it was very different in the age of film. All the time spent in the darkroom had taught dad to be very efficient in his style of shooting, only pressing the shutter just in time to capture that decisive moment. He also had that uncanny ability that all great photographers have, of being in the right place at the right time. In my dad’s case that often involved him darting under ropes or over fences, beyond signs warning “Keep Out” or “Staff Only”. This is presumably how he captured some of his Glastonbury scenes, from the scaffolding of the lighting and sound rigs.

But perhaps the most remarkable thing about dad’s photographs is that they remained almost entirely unseen for most of his life. He did not pursue photography as a career, though there is no doubt he was talented enough. Instead, he continued to follow his calling in medicine and took pictures for the pure love of it, showing them only to friends and family before putting them back in their yellow boxes, where they remained for decades, save for the occasional slide show.

In 1999, dad suffered a stroke that forced him to put down his beloved Nikon. My mum, Jane, then began the process of digitising a select few of the thousands of images he’d taken over the years. She was a great believer in his artistic talent and strongly felt his work deserved to be more widely seen and appreciated. After she died in 2011 it fell to my two brothers and I to pick up the baton to share his work.

So this is what we’ve gradually been doing. In 2018, aged 80 years old and by now quite frail, dad was able to attend what proved to be a highly successful debut exhibition at the City Art Centre in Edinburgh followed, in 2020, by the publication of his first ever book. Dad died in December 2020 after a long illness but we were very grateful that he lived long enough to see the rave reviews the exhibition and the book both received.

We still firmly believe that dad’s photos are one of the highest quality photographic archives of the era and an important historical record. We recently launched a Patreon crowd-funding page to help us create a digital archive of his roughly 2000 black and white prints and over 20,000 colour slides. As we slowly sift through the slides we keep coming across the most amazing little photographic nuggets – like a glass-slide photo from around 1967 of a very youthful David Bowie with the under-stated hand-written caption: “Singer at the Beat Club, London.” 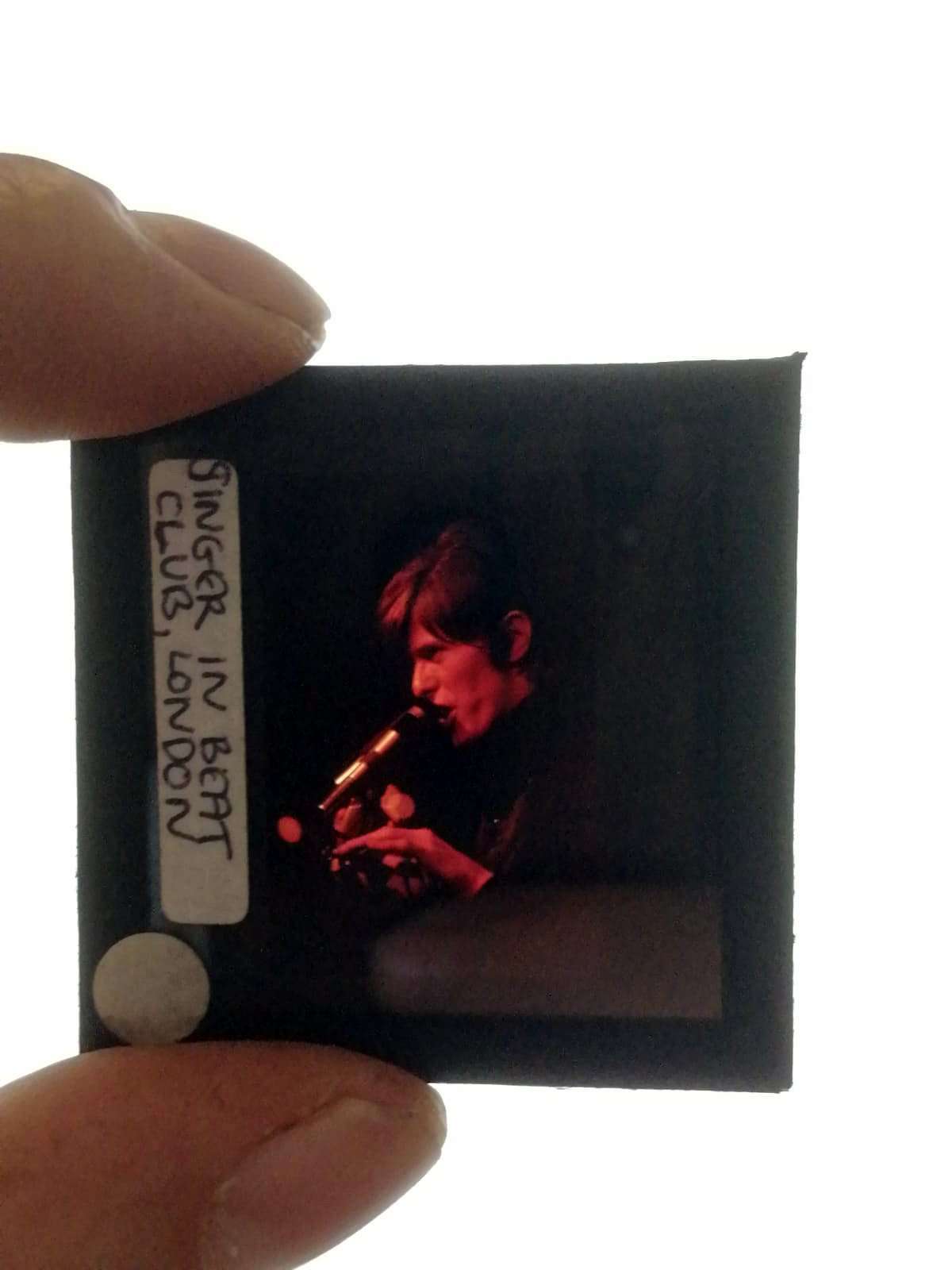 We held discussions with the Glastonbury organisers about using some of dad’s images from 1970 to mark the 50th birthday of the festival but sadly Covid-19 spoiled everyone’s plans that year. 2021 marks the 50th anniversary of the Pyramid Stage but, again, we won’t be able to host an exhibition at the event. Instead, Emily Eavis and co prepare to welcome the world to Worthy Farm with a live-streamed version of Glastonbury. Obviously, it won’t be quite the same without the crowds and the mud but we wish them all the very best.

Strangely, I haven’t actually been back to Glastonbury since 1971. I hope I will one day but in the meantime, I might just tune in to the live-stream and when I do, I’ll raise a toast to my dad and his incredible photos.

For more info and how to support the project via Patreon click here.

I was at the first two Glastonbury’s with my grandparents, sadly, they have now gone. I remember vividly standing in the field, as we were entering a group of people stopped my grandfather and asked him how to get to Reading, to which he replied, you need to get to the main road and hitch from there, sorry I can’t help as we’ve only just arrived.” He then paid the guy taking the money a couple of pounds to get in. We then proceeded to sit on the grass and enjoyed the bands.

These are amazing! Such crisp and clear images! Being a street photographer myself, I really appreciate them. My first Glasto was 2019, fulfilling my bucket list, celebrating my 50 years of survival since Woodstock 69 and the brown acid at the tender age of 18! I’m ticketed for 2022 and it will surely be an amazing celebration of Glastonbury and post-pandemic bliss! Cheers! John

Fabulous photos and well done for sifting through them, a big job but well worth it! Many Summers were spent at Glastonbury and I think my first one was in 1979 when there were a couple of stages, one market place and you could camp with your car! Happy days indeed.