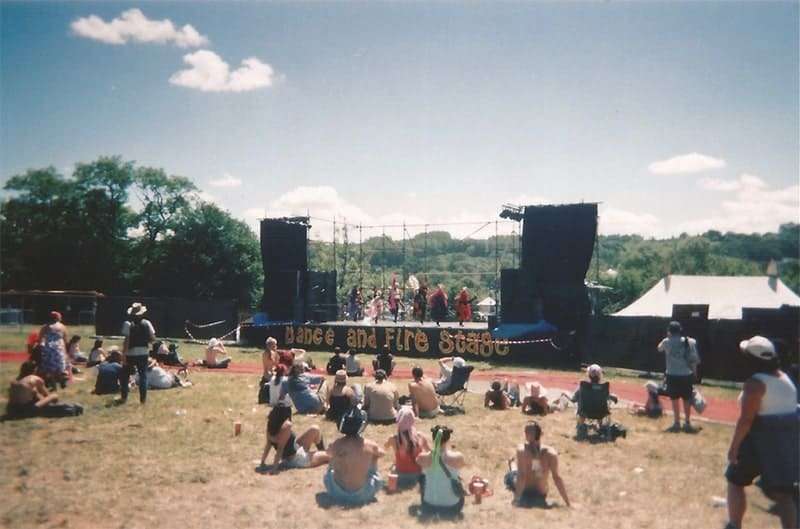 I’d been on the stand-up comedy circuit for a couple of years and was playing a disastrously attended night in Camden back in the winter of 2004. As the 7 audience members shuffled out of the pub the compere, Paddy Bramwells, checked his phone and mentioned to me and the other remaining act that his friend Arabella Churchill was looking for comperes at Glastonbury. “Wanna do it?” We both said yes.

I was assigned to the Dance and Fire stage. There was not a lot of dancing or fire, as the roofless stage was sodden with water for most of the weekend. Chaos reigned as acts got stuck on the motorway and I had to fill on stage for up to an hour, watching the crowd dwindle to 2 people who confessed to being so wrecked they couldn’t actually have moved if they’d wanted to. I was hooked (I saw the other act I’d been booked with a couple of days in, shell shocked outside his rain-soaked tent, vowing never to return).

The following year I ended up having to do a 14-hour compering shift after one of the other comperes went AWOL. I invented the ‘Glastonbury Animal Game’, a nonsensical bit of time-wasting that involved getting the audience to shout out the names of various animals. At one point late in the night, while world-class acts flaunted their stuff on the Pyramid and other stages, I had an entire field full of festival-goers enthusiastically shouting the word “badger” over and over again. I had never been happier.

These were my people. I’ve been back every year I possibly can. The stage morphed into what is now the Summerhouse Stage and seeing the familiar faces of Jess, Hamish, Haggis and so many others who keep that corner of the festival running is like catching up with family. I’ve been told I have a job for life, and I truly hope I do, because it’s the best job ever.

I always pay my pilgrimage to Paddy, still compering the Outside Circus Stage like he has been since the 80s, to say thank you. He’s been working at Glastonbury for over 30 years now and I hope to match him at the very least. In Paddy’ words, it is “The Most Fun Weekend”.

Photo © Tim Cuff "My first year covering the festival for the national papers was 1997 - a good and wet one. I remember such an exciting buzz I didn't eat a thing all day, just ran on adrenaline. At the end of an exhausting day traipsing around I had ...
Read More

"We were a jolly party of 8, it was 1999, we were all Glasto-veterans apart from our Spanish friends who were Glasto-virgins, and Bad Terry - known for his argumentative ways and not caring less attitude towards intoxicants and the enjoyment of life - who arrived with us via a ...
Read More