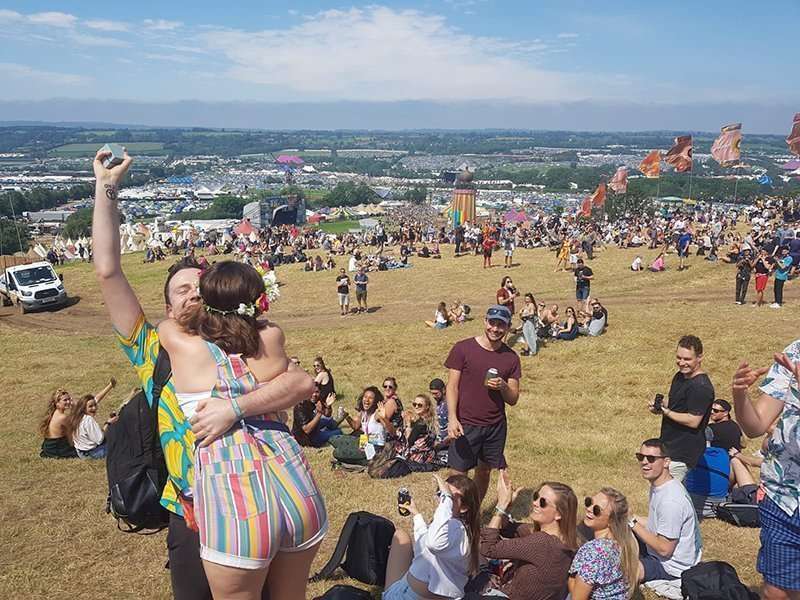 My first Glastonbury was in 2017 just after finishing university with my partner and friends. We went to vet school in Bristol and lived in Somerset for the last 2 years of the course so it had always been the dream to go to Glasto after finals.

The festival completely surpassed our wildest expectations – it really is the best place in the world! We had such an amazing time that we vowed to try for tickets every year for the rest of our lives!

On the first day of the festival in 2019 my partner, Dan got down on one knee in front of the Glastonbury sign at the top of the Park and proposed (of course I said yes!). We ended up getting interviewed by BBC Points West as part of a feature they were doing about a couple who got married there. We’re currently planning our wedding for summer 2022 (which will have a bit of a festival theme!).

We’ve got tickets for the next Glastonbury (my maid of honour Holly has managed to get us tickets 3 times in a row now!), as have Dan’s parents who went once before Dan was born and are excited to see where we got engaged.

Photo © Rod Ward "My girlfriend, who has since become my wife, told me about a festival she had attended in 1981 and said she was going again in 1982. I was working in London at the time and had no transport so I hitched. As she was there on ...
Read More

"I started going to Glastonbury Festival when I was just 7-years-old. The festival is in my blood and was a solid part of my upbringing. My Mum and Dad, who were stoic CND supporters in the 80s, would take my younger sister and me out of school and write letters ...
Read More