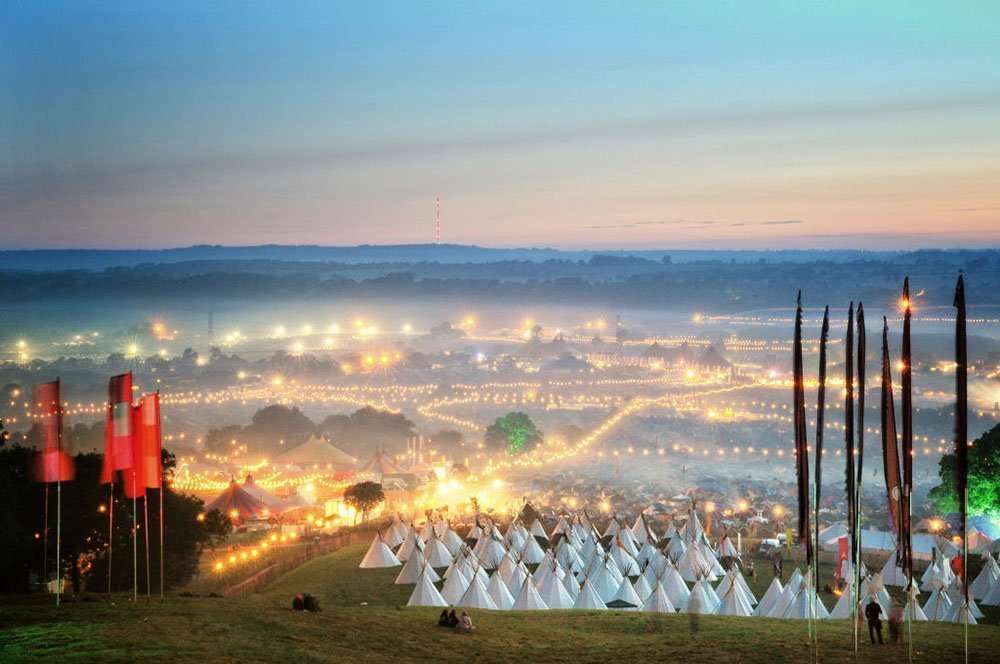 “My introduction was a pretty disastrous festival in 1990. My lasting memory from that year was when a helicopter landed in the crowd to airlift a girl to hospital during The Cure’s headline set. I wonder if anyone has any photos of that, not least to confirm that it actually happened?

I started shooting as a press photographer in 2000 when the Press tent was just a gazebo with a disconnected landline. I vividly remember the day Radiohead played in 2003, that was quite a day, and night, and this is how it unfolded.

I’d had a call earlier in the day from a magazine, they wanted me to do a quick shoot with Supergrass before they played, to go with a feature. I was to meet them by the Pyramid backstage portacabins. While I was waiting for Gaz&Co to emerge, the many members of the Polyphonic Spree were in a neighbouring portacabin(s) preparing for their show. Being a fan, I hung around and chatted with a few of them. That evening after shooting Radiohead, as the press pack were being escorted from the photo pit, I bumped into Tim Delaughter from the Spree and told him how much I enjoyed their show earlier. He was delighted and gave me a big hug and i found myself nuzzling his long, soft, curly hair for much longer than was necessary, it was beautiful, but at that moment Wayne Coyne stomped past wearing giant paper mâché fists and began to dance around us!! An unreal moment!

My head spinning, I made my way off into the night to meet friends in the green fields. As I was making my way past the Other Stage, it was seriously going off! Huge deafening beats were pumping out and the crowd were going crazy. Although from my view at the back I was struggling to see anyone on stage, I stopped and looked harder, squinting, but no-one was there!! The music carried on and the crowd were still going ballistic when on walked the Super Furry Animals in full yeti costumes, returning for their encore, and they blasted straight into a super-heavy version of ‘The Man Don’t Give A F*ck’. MIND BLOWN!! It gives me tingles thinking of that now, such an amazing performance and absolutely one of the most incredible moments I’ve had on those hallowed fields.

Working at Glastonbury as a photographer is an awesome privilege, and not one to be taken for granted, every year is life-changing and I hope and pray there are many more.”

"There’s no other place like Glastonbury Festival, and this picture captures its mystique perfectly. This photo was taken in 2019, at about 7 Sunday morning wandering back from South East Corner towards our tent at The Other Stage after watching Jamie Jones and Patrick Topping (who I’d managed to get ...
Read More

"It was 1970 and my friend and I decided to attend the Pilton Festival (which later became Glastonbury Festival) near Bath. I think we’d seen it advertised in NME (New Musical Express) or maybe our local record shop. We had just turned 17 & were doing a secretarial course ...
Read More