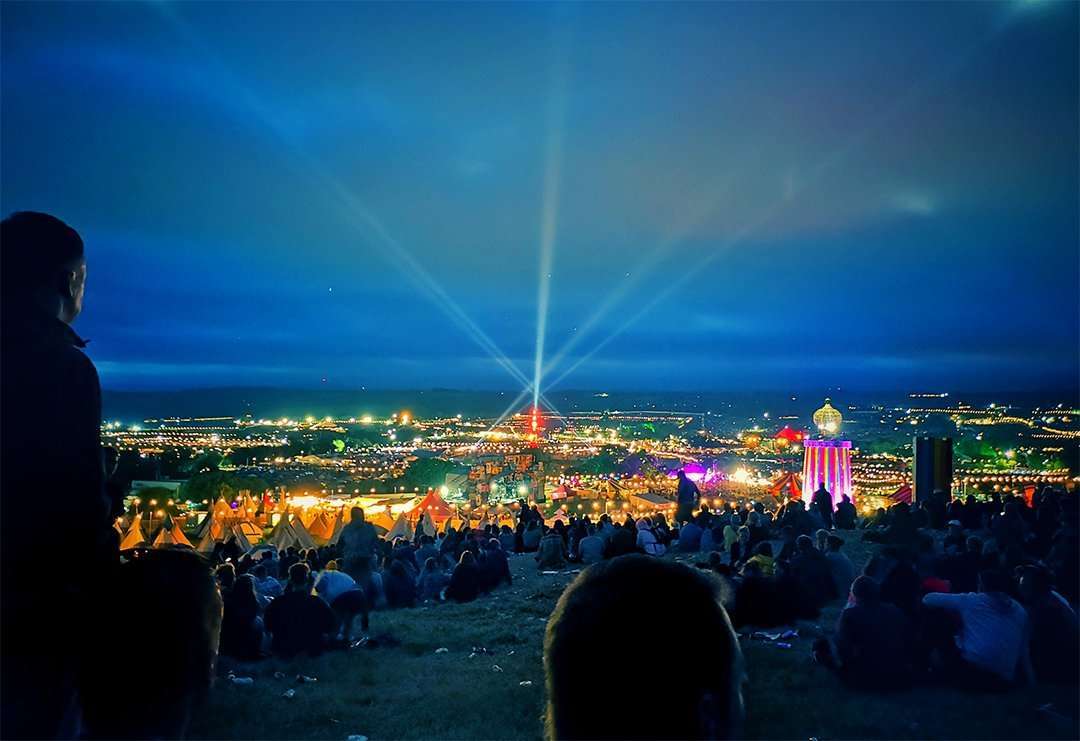 “It was a Thursday evening, I was 17 and had just passed my driving test. My friends and I were sitting in my living room deciding on what to do with our new freedom when we flicked past highlights of Glastonbury Festival on TV. We didn’t think it looked particularly good but we thought if we managed to get in for free it could be worthy of our first roadtrip. We quickly packed a bottle of vodka, a tent and a few sleeping bags then jumped in the car.

3 hours later we had arrived in Pilton and were looking for somewhere to park. We couldn’t understand why there were stewards sitting all along the roads preventing us from parking anywhere even remotely close to the festival. This didn’t happen at other festivals. “What’s so special about this festival?!” we said.

As midnight approached my friend Tom noticed a light on in one of the nearby houses so he knocked on the door and shyly asked if we could park on their drive and the owner kindly said that was fine. We didn’t know how we were going to get into the festival but we thought jumping the fence would be the best method, so we unloaded the car and began walking towards the festival. We decided to go cross country to avoid the stewards and also to hopefully find a bit of the fence that we could jump over without being seen. A lot of the fields had bright spotlights in them and as we walked past one of them we noticed a ladder poking out the bottom of one. It had probably been used to help erect the spotlight but being (slightly chavvy) teenagers we thought we would borrow it for a while. We had planned on standing on each other’s shoulders to get over the fence but this would be much easier.

After another hour or so of crawling through stinging nettles and thorn bushes, we had finally arrived at the fence. The sheer size of this fence was unlike anything we had seen at other festivals. Every 100 metres or so there were huge watchtowers and following the fence line was a metal road where every two minutes a 4×4 full of security would drive past shining their torches into the woods where we were hiding. We were out of our depth. We cracked open the vodka.

After a few swigs and bickering about who was going to go up the ladder first it was decided that I would go first, followed by Tom, then Jordan then Ashley. I assembled the ladder and waited for the 4×4 to drive past, my heart felt like it was reenacting the drum n bass mix we listened to on the journey down. As the 4×4 rumbled into the distance I sprinted towards the fence with the ladder and hastily climbed up it. I heard shouting, glanced to my right and saw stewards running towards me only about 30 metres away. Tom was right behind me but Jordan and Ashley were still hiding in the bushes. The ladder was barely long enough for me to reach the top but as I peered over the top I saw it. A city of lights, colour and fire larger than anything I had ever seen before. I jumped down the other side where an oldish looking dreadlocked guy saw what was going on and asked if we wanted to hide in his tipi. We greatfully accepted his offer and emerged half an hour later after the heat had died down.

As both our phones had died we had no way of contacting Ashley or Jordan but it turns out they never climbed the ladder and ended up hitchhiking back to Northampton. As for me and Tom, we set up camp and had the best weekend of our lives. We tried to explore every part of the festival and absorb ourselves in the culture as much as possible. 10 years down the line I have now been to 7 Glastonbury Festivals, have a Glastonbury inspired campervan and have been approached by artists to turn my photos into artwork. I definitely left that festival as a different person.”

Click here to buy / learn more about the image artwork featured above.

“It’s a cliché, I know, but Glastonbury is home to me” – Luiza Lopes

It's a cliché, I know, but Glastonbury is home to me. My sister, my mom, my stepfather and I are all very connected to music, and our favorite pastime is watching concerts together, talking about music and, well, anything music-related really. In 2015 we attended the festival for the first ...
Read More

“We got everyone dancing on the light-up dancefloor” – Grace Edwards

I really have too many Glastonbury memories to remember. I worked on a bar for years so always got the best tip-offs in exchange for free drinks - I'm not going to share the best ones! In 2013, my friend Rowena and I were looking for somewhere calm to sit ...
Read More