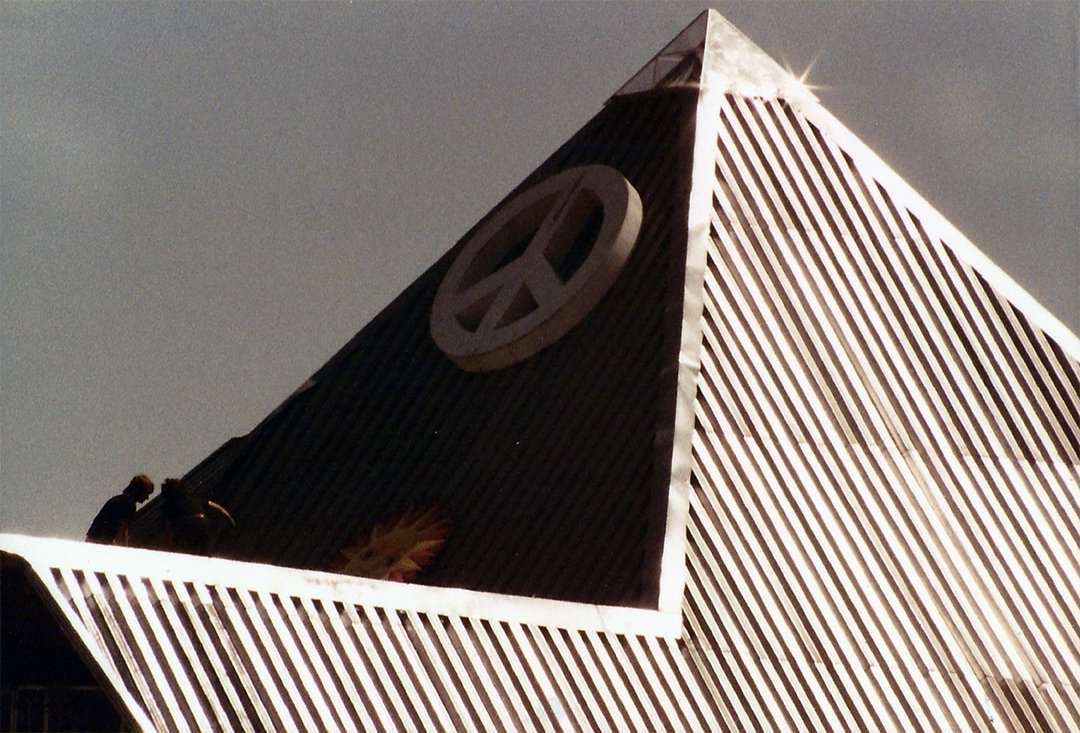 “By 1981 I’d only ever been to Knebworth in 1976 and Deeply Vale in 1979, so when a bunch of mates decided to hire a van and head to Glastonbury, I joined them. There were eight or nine of us in the van. Two would pay and drive in, while the rest of us would climb over or under the old hedges and fencing and somehow meet up inside. I know I saw Rab Noakes, Decline and Fall, Hank Wangford, Supercharge, Aswad, Mother Gong and Hawkwind as I have photos. I have a couple more photos of bands I can’t recognise. 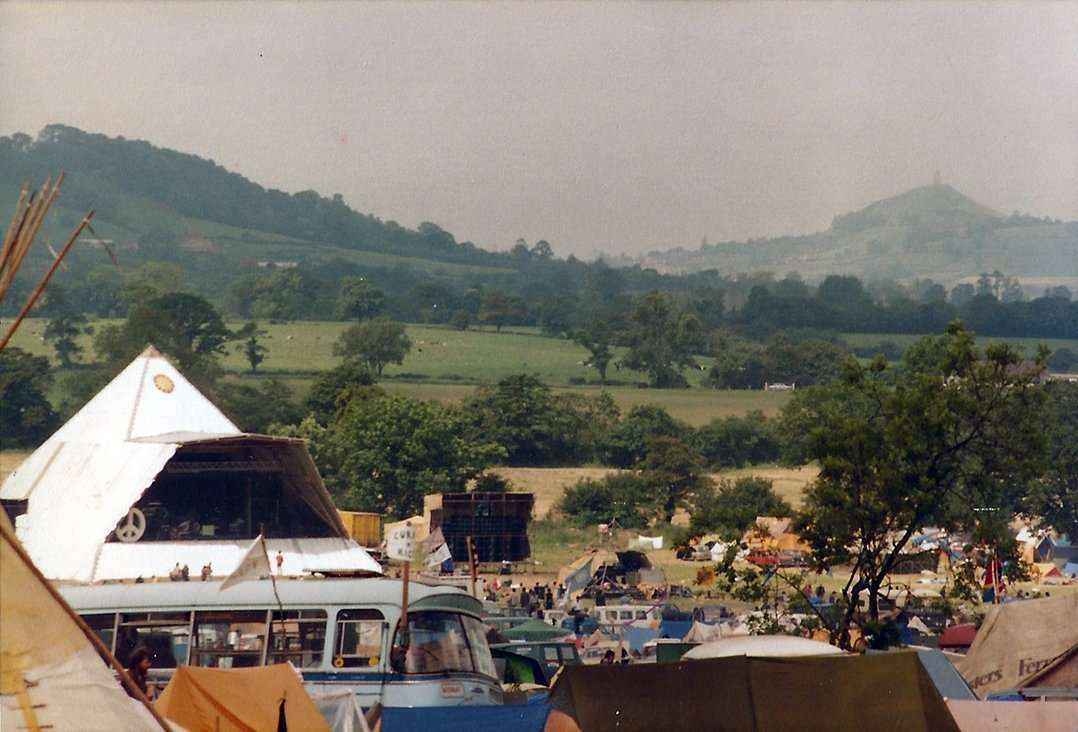 Come 1982 the same thing: hire a van, two drive in and the rest nick in. A few of us had tickets for Frank Zappa at Hammersmith Odean for Saturday night. We thought we would be able to just pop over to London, see F.Z. then drive back to Glastonbury and carry on where we left off. What could go wrong? MUD! I still have the unused ticket. I saw Van the Man, Jackson Browne but I can’t remember who else. I bumped into a friend who was selling cider, with a mate, from the back of a van. He dropped a tab, ‘Mickey Mouse’ I seem to remember and I have a photo of him giggling away while people queued up for cider. I can’t remember who was on stage when a large inflatable die tumbled over the crowd. On its way back it was covered in mud or cow muck. I think it was this year when one of us pitched their tent under the pylon cables. It charged the tent poles with electricity and you would get a shock if you touched them. 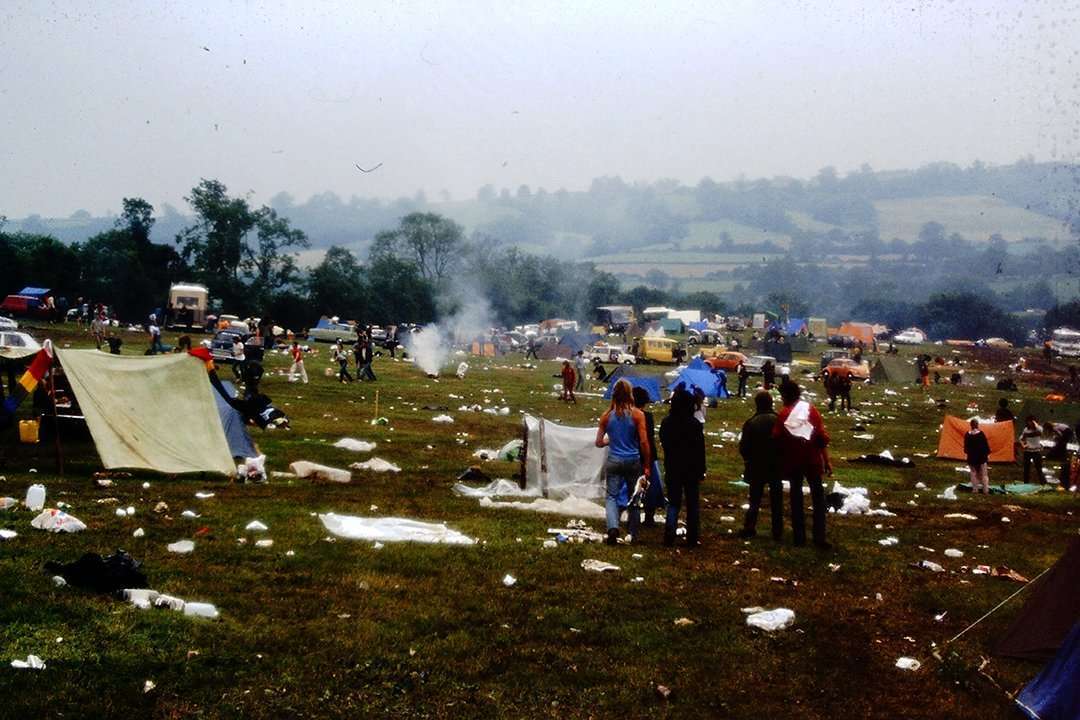 In 1983 I had bought a radio cassette player, some batteries and a couple of cassettes in order to record some performances. I managed to record some Moving Hearts, Tom Paxton, Incantation, Alexei Sayle, A Certain Ratio, Black Roots and Melanie, and to get some photos of Curtis Mayfield as I seem to remember he did around a twenty-minute version of ‘Move On Up’. I also got photos of Tom Paxton, Incantation, King Sunny Ade and UB40. 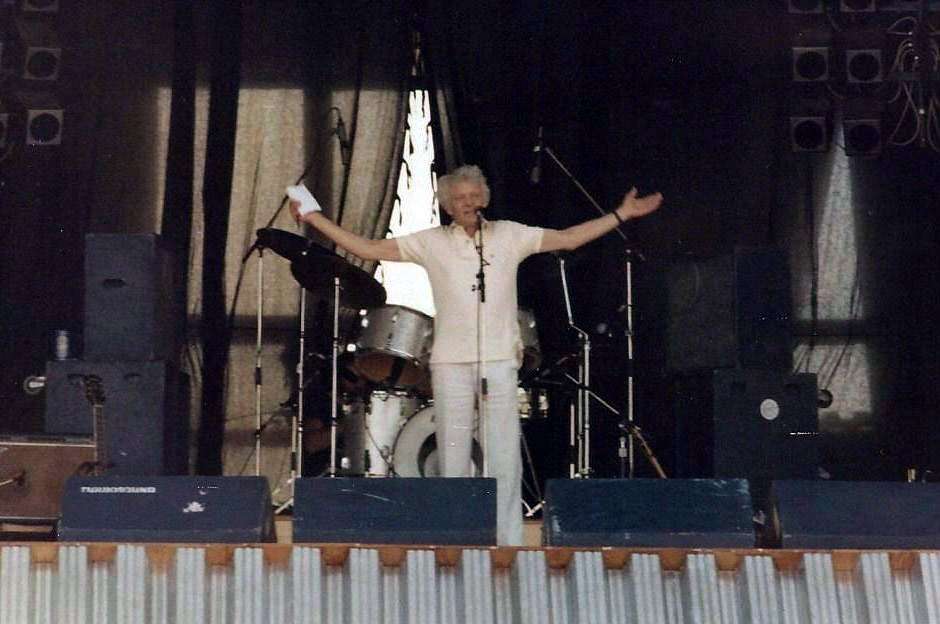 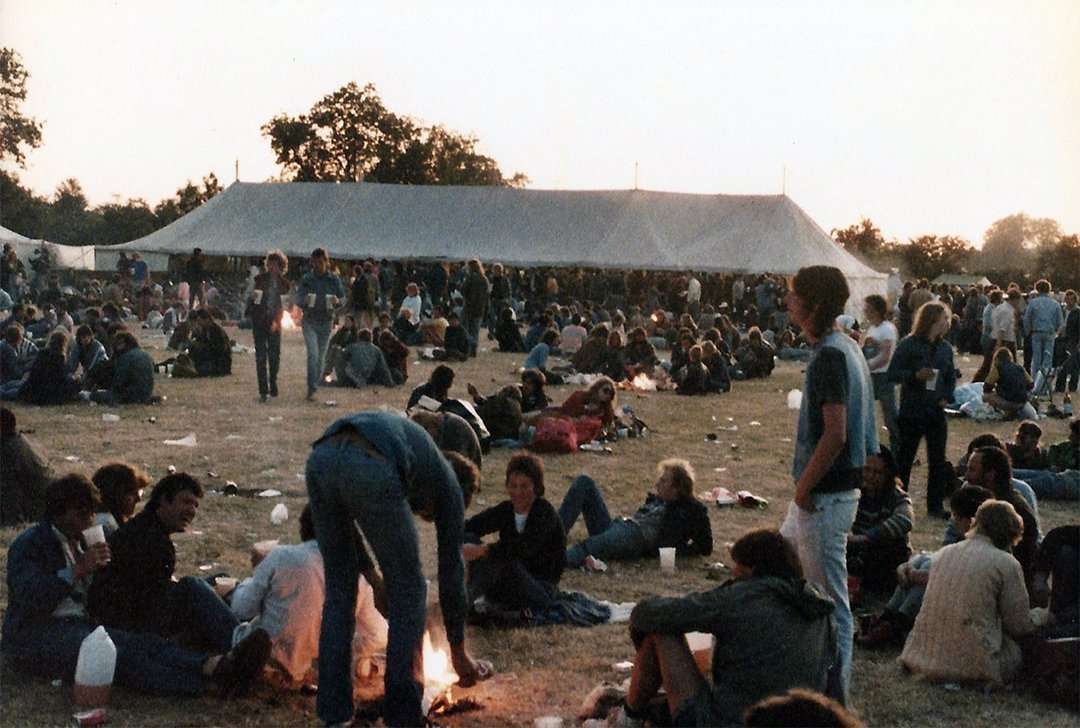 Fast forward to 1984, and I was now at art college in Cambridge so I hired a car and travelled over to Worthy Farm with some fellow students. We drove in with one person in the boot and another in the rear footwell covered in our belongings. We bumped into our friends from Harrowgate at our usual meeting place, just in front of the mixing desk when the bands were on. I managed to record some Weather Report, Fela Kuti, General Public, The Smiths, Fairport Convention, Christy Moore, Brass Construction, Paul Brady and John Martyn. Great Weather this year. 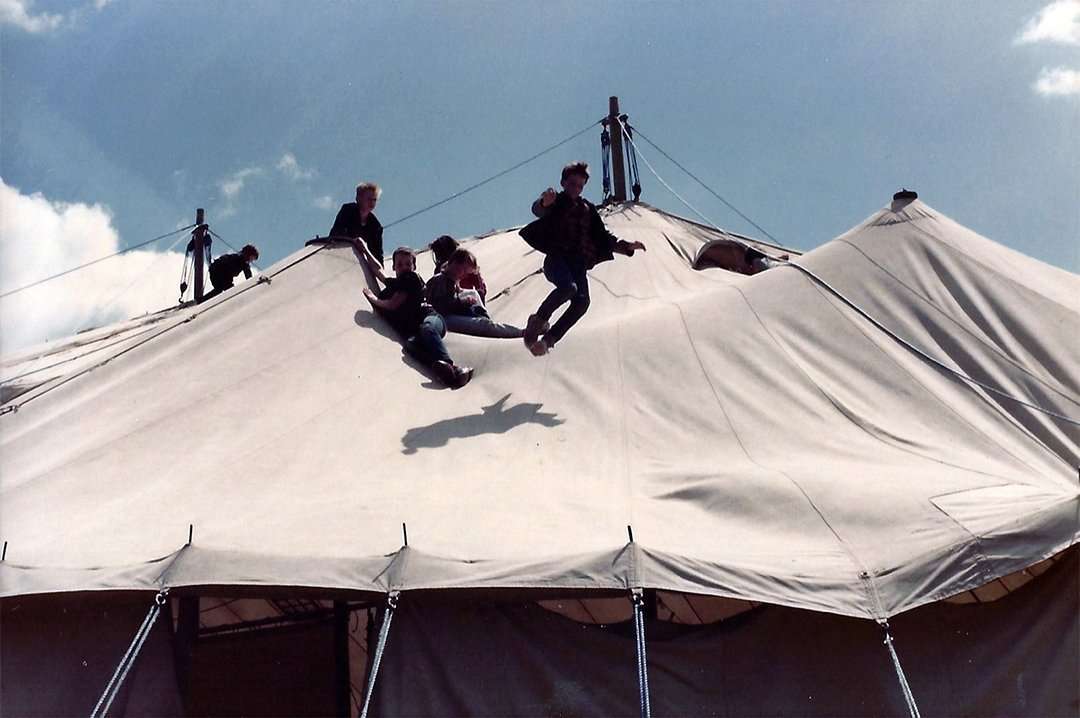 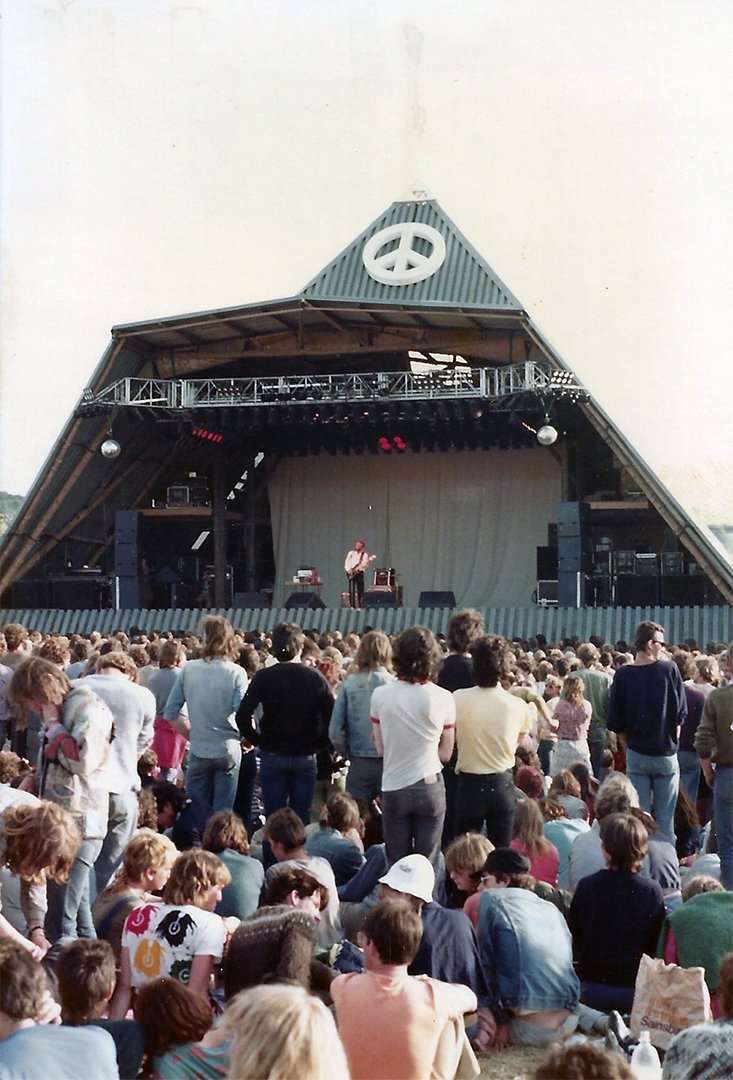 1985 was not a great one weather-wise! We made our way from Cambridge by public transport. My girlfriend and I were staying with a couple of friends in their tent. That was okay until they’d had enough of the mud by Sunday. They packed up and left, leaving us homeless. We managed to track down some friends from up north and sheltered in the back of their van. Another friend from up north, now living in London, had the great idea of buying a load of Wellington boots on the way to the festival. They sold in a flash. He managed to leave the site, load up with more wellies and flogged those too. He ended up giving us a lift back to London. I didn’t take any photos that year as my camera lens fogged up with the damp. I made no sound recordings either. One image that stands out in my mind is of a dead umbrella poking out of the smooth mud in front of a deserted pyramid stage. The high point for me was seeing Hugh Masekela on stage when a weak sun broke through the grey sky and lit him up.

In 1986 I felt I had to go once again to shake off the muddy memories of  1985. I seem to remember seeing The Pogues, Ruby Turner and The Housemartins, while definitely remember seeing John Martyn, Louden Wainwright III, Robert Cray and Christy Moore – in addition to managing to record them all. This was the last time I ever attended Glastonbury, but have great memories which will last a lifetime.” 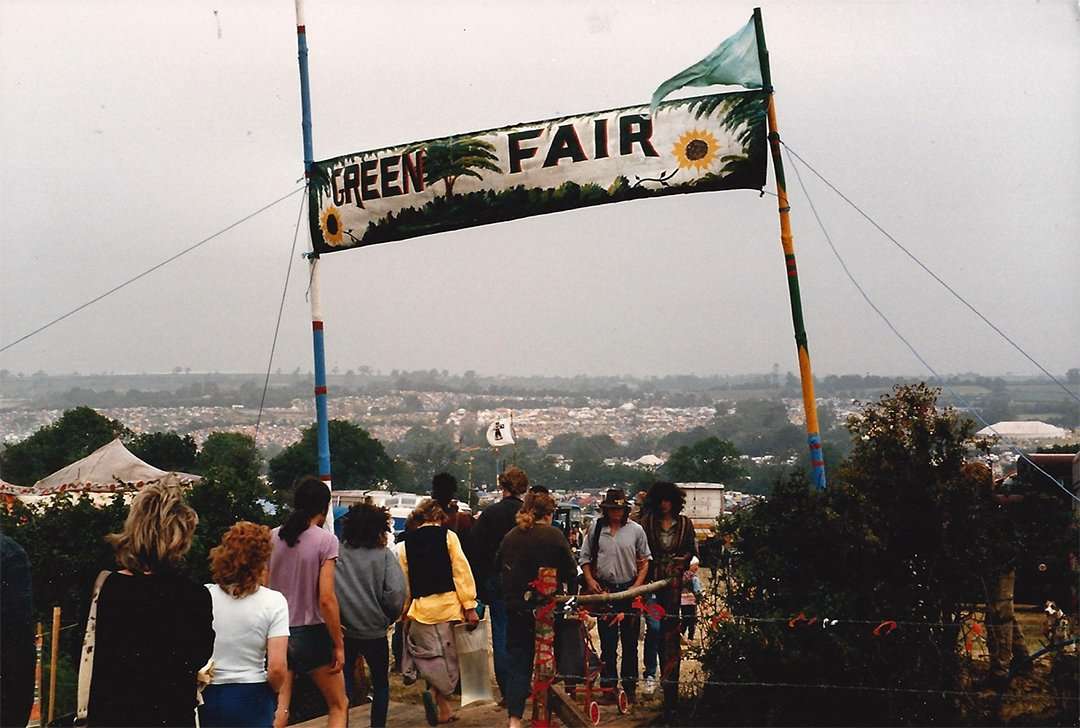 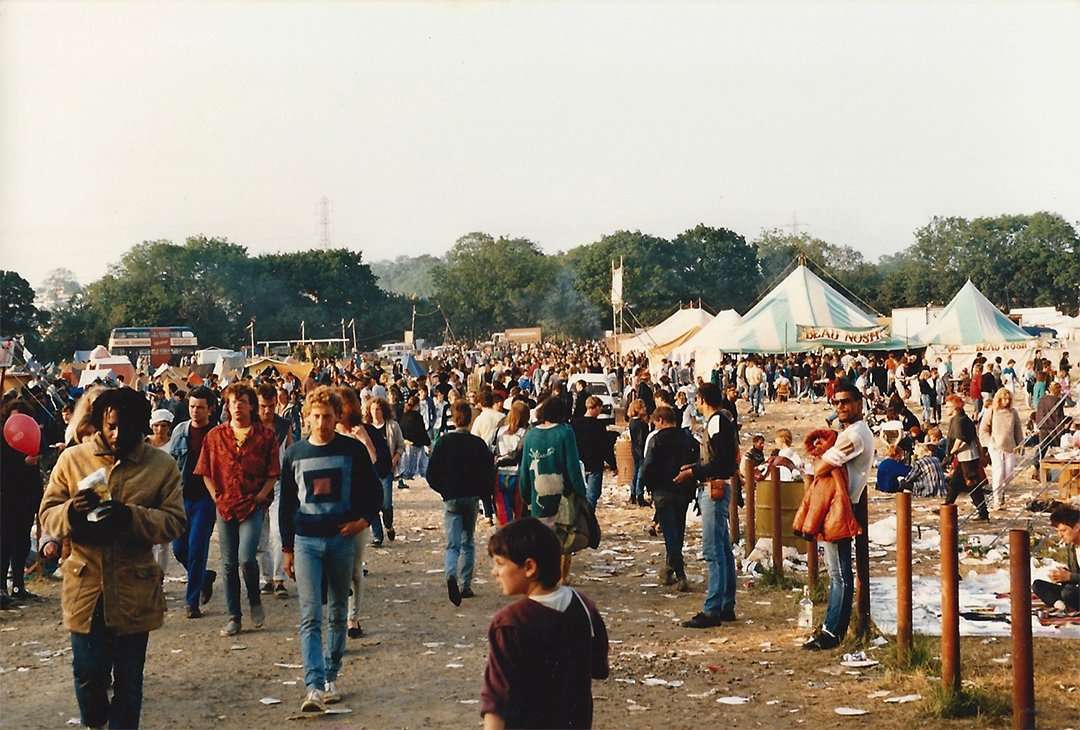 "My first Glastonbury was in 1981 when I took these photos. There were plenty more but sadly lost. The view of the stage is from our tent, I guess this was Friday morning, I didn't know the couple near the stage but it gives an idea of how close you ...
Read More

Photo © James Verschoyle "I’ve had many magical moments at Glastonbury, but this one in 2019 at Block9 was very special. Catching the sun shining through the trees whilst 'Diamonds On The Soles Of Her Shoes' (Todd Terje edit) was playing, very special indeed! I couldn’t believe my eyes and ...
Read More