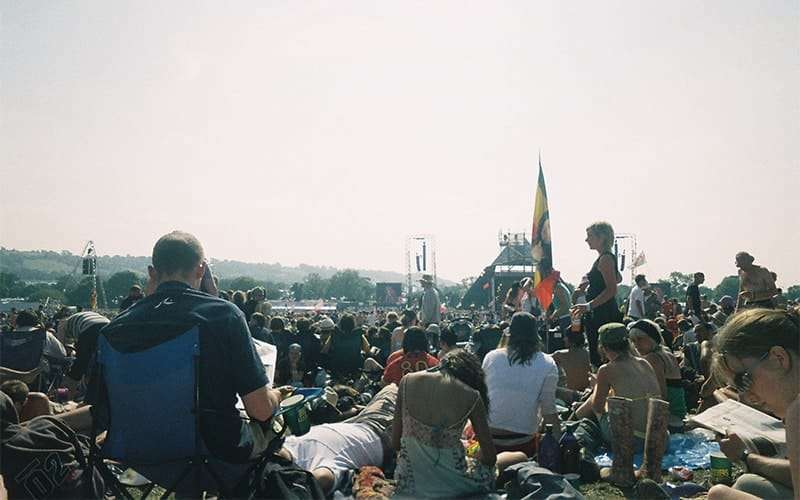 
It all started when in 1990 there was nobody to give my ticket to. There I was with a group of friends. We had stepped off the bus that had taken us from Bristol to the festival site. It was that short trip, well short in comparison from the epic overnight journey from Aberdeen, where I first felt something special was going to happen. Sleep-deprived and onto a second can of lager it was the countryside that provoked awe. High ancient hedgerows zoomed by as we travelled through villages that were the distillation of some sacred form of Englishness that I had never encountered before. Old pubs with long sloping roofs rested next to village greens alongside Norman churches actually flying Cross of St George flags.

There was an occasional glimpse over the Summerland Meadows of what I got to know as Glastonbury Tor. A singular hill with its spiral terraces surmounted by the medieval St Michael’s Tower in an otherwise flat landscape with its equally interesting myths and realities.

Then we arrived at the site. It seemed sudden and I can’t recall seeing any of the festival fields as we approached. We just turned a corner through a gap in the venerable hedgerows and there we were. A young woman popped up to the upper deck where we sat edged between tents and rucksacks and slabs of beer. She wore a Brighton and Hove Peace Group t-shirt and politely asked us if we had tickets. I rooted mine out from a bum-bag that I thought would be a useful bit of kit to have and waved my ticket. “Super”, she said before disappearing.

We disembarked and I had my ticket in my hand. I thought I must hand it over to someone. But there was no one. I felt guilty. I was doing something wrong. The young woman from the peace group was attending to another bus. The gate was wide open. There were some men in high-viz vests who could have been security. But they were safeguarding a bottle of cider.

I just walked in, ticket in hand. My mates Fraser and Steve did the same, alongside Fleur and her friends. We carried our camping gear and kit between us, and we made our way along a track. In our minds there was going to be the sort of campsites that we had holidayed on as kids. Marked spaces with pathways leading to some dismal but perfectly functional shower and toilet block. Of course, there wasn’t.

There were just tents. Tents after tents after tents. Like everyone else’s first time it was an impossibility to fully comprehend what lay before you. I had some rough sketch in my mind in addition to the toilet block of a couple of fields with a flat bed truck somewhere with precarious speaker stacks on either side. Okay, that field did exist, tucked away on the margins, but beyond the tents and more tents, there were fields upon fields. We pitched our tents in a rough circle and set off to explore.

It felt like an endless trek, across some new land already populated by an advanced civilisation that created wonders out of whatever they could find to do whatever they wanted. I can’t recall the exact place of my epiphanic moment, when I realized that this place, this valley in the southern reaches of Britain was what I wanted to be lifelike all the time*. What felt to me like total liberty fueled by constant sensory overload and the perpetual shock of the new. It’s a feeling that never really leaves you.

* …but with better toilets.

“The Church of Stuart Pearce and other stories” – Rich Fisher

"I first went to Glastonbury in 1997 – and while it probably wasn’t the year to see the festival at its best due to the muddy conditions, I immediately fell in love with the place and have been going ever since. It’s given me so many great experiences – from ...
Read More

I was 18 when I decided to go to Glastonbury for the first time. A friend had offered me a tent-share – The only problems hindering my plan were that it was the Friday afternoon of Glasto weekend, I didn't have a ticket, and I was in London. Undeterred, I ...
Read More