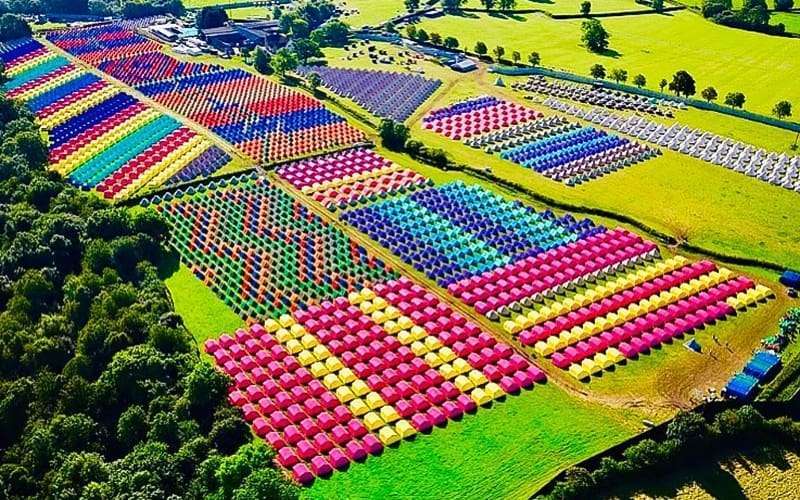 The small-scale Gulf state is expecting 1.6million football fans to descend in 2022 for the World Cup and have asked Glastonbury for help

Qatar World Cup officials have asked Glastonbury Festival organisers to help them plan gigantic desert campsites for fans ahead of the 2022 tournament, according to ESPN.

The Middle Eastern country expects approximately 1.6million spectators to visit during the month-long competition, with around 160,000 requiring accommodation on the busiest days – Covering just over 11,500 sq. kilometres (4,400 sq. miles), Qatar has only 37,000 hotel rooms across the tiny Gulf nation.

That being said, it is reported that construction work will take that figure up to 70,000 rooms by the end of 2021, with rooms being available in the capital Doha and two cruise ships will be docked in the port to provide temporary floating accommodation for 40,000.

And now it has also been revealed that the local organising committee for the 2022 FIFA World Cup in Qatar has approached Glastonbury – which welcomes approximately 200,000 festival-goers (including staff) on Worthy Farm in Somerset over a period of five days.

They have also spoken to organisers of the Coachella festival, which caters for approximately 250,000 (including staff) in California’s Colorado desert over the space of two consecutive weekends.

According to the plan, the World Cup campsites are intended to be built on the outskirts of the city, providing licensed bars and restaurants, entertainment and washing facilities.

It is hoped the World Cup campsites, on the outskirts of the city, will have licensed bars and restaurants, entertainment and washing facilities – Fans will have the options of choosing from a range of tents, from the very basic through to luxury ‘glamping’, complete with plumbed-in toilets.

Ahead of next year’s festival, Glastonbury is set to introduce a new official offsite camping area – Sticklinch – as part of the Festival’s continued commitment to reducing waste which is left on-site, and in general.

Glastonbury boasts a virality of different camping areas for catering for different atmospheres and needs and Qatari officials hope to be able to replicate a piece of that come the next World Cup in 2022.

“We want to welcome football behaviour. We want fans to come and sing,” he said.

“What we ask is for the visitors to appreciated our culture, to respect our culture.

“We obviously don’t want trouble makers, aggressive fans. I’m not saying all football fans are aggressive but there are certain elements that are aggressive and these are the ones that we have to make sure don’t ruin it for the rest.

“But when it comes to people who are celebrating, who are singing, that are having fun, that are acting like true football fans, we want to welcome those.”.

Glastonbury 2020 Accommodation: Here’s everything you need to know…