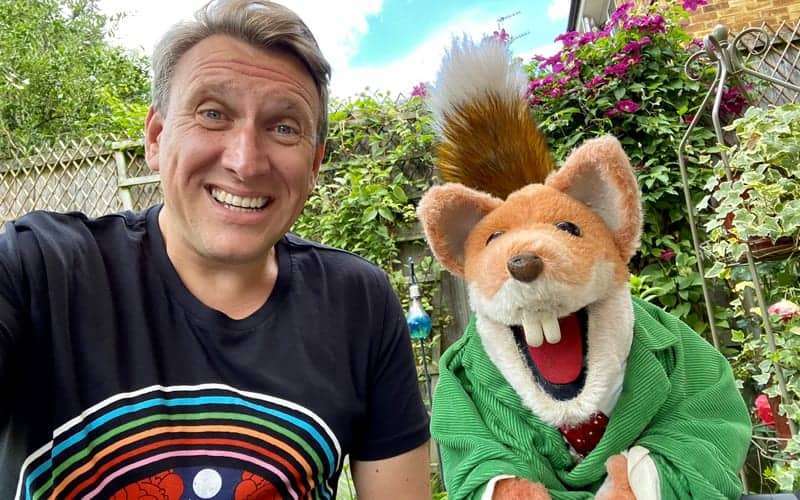 The beloved red fox looks highly likely to return to Worthy Farm with Mr Martin for the 2022 Festival – Boom Boom!

Looking at the Basil Brush Show / Unleashed schedule  – which kicks off on 16th February and concludes on 20th November 2022 – it is hard to avoid the “To Be Announced” perfectly shaped Glastonbury-gap, from the 20th till the 27th of June.

Sharing the news via his official Twitter account this afternoon (26 January), Brush said: “WOW!!! We’re going to need a bigger year Mr Martin! Not much space left but I’m sure we can fit a few more shows if fans want them? See you all soon either for our family show or ‘Unleashed’ Again!! BOOM! BOOM!”

Mr Martin, also known as Martin Cabble-Reid added: “We had our first production meeting yesterday and it’s all systems go for 2022. A few dates we aren’t allowed to announce just yet (I think the dates give it away though) But we will be on the road with our Family Show and UNLEASHED for grown-ups, again. Come say hello!”

WOW!!! We’re going to need a bigger year Mr Martin! @MrMartinBB.
Not much space left but I’m sure we can fit a few more shows if fans want them? See you all soon either for our family show or ‘Unleashed’ Again!! BOOM! BOOM! pic.twitter.com/IvLxYmgKb0

Taking into account that the two self confirmed for playing the 2021 Festival before it was forced to cancel due to the coronavirus, it is highly likely that Glastonbury 2022 and the Kidzfield, in particular, will see the return of Basil Brush and his trusted sidekick Mr Martin.

Cabble-Reid has been performing in the Basil Brush Show for over 4 years while travelling all over the UK performing at Holiday parks, shopping centres and festivals including four days at Glastonbury in the prestigious Kidzfield in 2017 & 2019.

Back in 2020 when the duo announced that they will be returning to Glastonbury Festival’s Kidzfield for 2021, Cabble-Reid said: “A lovely morning back with me old mate filming for Glastonbury & BBC bits & bobs. I can’t even comprehend the lack of a Glasto festival this year Loudly crying facePouting face Anyway, we will be back in the kids field in 2021 and it will be all the more wonderful”.