“Lights neon red in the dark of the Mexican night; a space out of time, a time out of mind, and a second gathering of the tribes…”

San Remo, the brand new venue which will be replacing the beloved Beat Hotel, has had its line-up poster shared by Glastonbury Festival this morning (Wednesday, 1st June) at 10:00 AM.

The Beat Hotel first opened as a small cocktail bar at Glastonbury in 2011 and had since become one of the most popular venues on-site – boasting a constant DJ line-up, alongside a world-class rolling food menu and an extensive selection of drinks.

After 7-yearrun at Glastonbury, 2019 saw the Beat Hotel appear at the Festival for the final time, after the creators confirmed they “want to change it up a bit” and have since taken the Beat Hotel on tour to Marrakech and Ibiza.

Announcing the San Remo news via Twitter, organisers said: “After Glastonbury 2019, the proprietors of the Beat Hotel took to following the sun, destination unknown. Eventually, they discovered San Remo, its lights neon red in the dark of the Mexican night…” 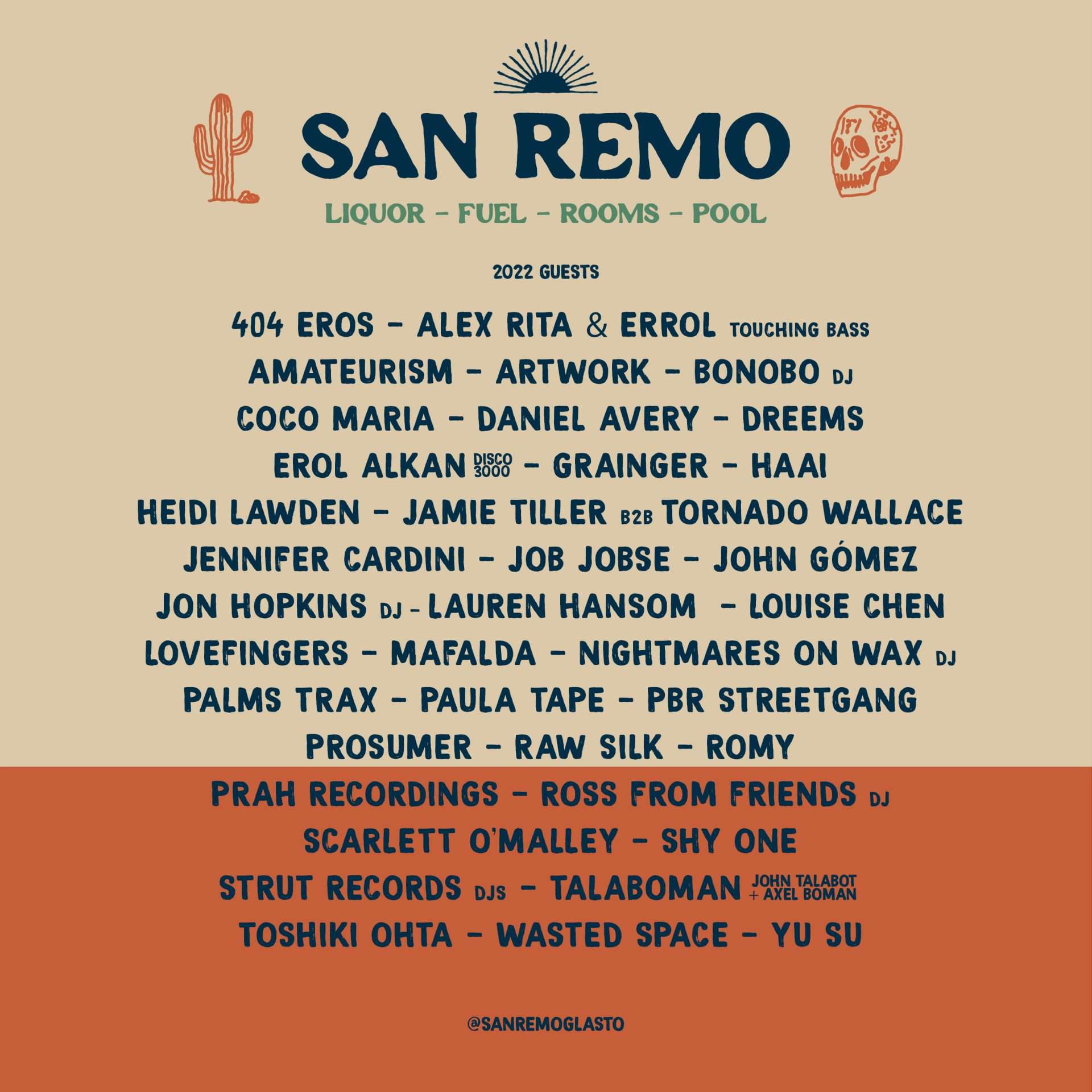 The statement published on the official website as to the premise of San Rem, reads: “The point was to go, and to keep on going. To chase that point at the end of the night, that moment of pure satori where any notion of the past, present and future gives way to an eternal Now. The Beat Hotel was where it began, an interzone where dreamers, poets, visionaries, musicians, DJs, and revellers came together to plot, to party, and to exchange testimonies on the journey thus far. But the point was to keep on going.

“In 2019 the decision was made that the Beat Hotel would close its doors for the last time, as the proprietors once more took to following the sun, destination unknown. Like all true seekers, in the end, they wound up in the Fellaheen lands of Mexico. Mexico, Kerouac reminded them, is a midnight movie; a new constellation; a place of sorceries and visions.

“The Beat Hotel crew head south, on the path of the poets and surrealists, in search of the old gods. They find intimations of them at pit stops along the way; at magical taqueria stands where they watch the women, hypnotic under the lights, making tortillas like the beginning of the world; at stand-up-and-spit mezcal stalls where they get high on the spirits of pulque; at improvised roadside shrines to Our Lady of Guadalupe where they ask for benediction; and then… this place, this place that looked like a service station or a secret local bar from the outside, who knows exactly, this place that literally beckoned to them as they pulled in for a beer and found what they’d been looking for all along, although they didn’t quite realise it at first; a magnetism, an energy, a new centre of desire.

“Everybody was in the place and no one knew how they had got there; a place of tall tales, mythic entanglements, and fated assignations; a place you have the uncanny feeling of having visited, somewhere, once before. Or maybe that’s just how it seems now that you have arrived, that you have always been here, at this mysterious centre of the world, with a warmth and a welcome that draws poets and dreamers – our own wild twins – to secret celebration and bacchanal. After all, the point was to go, and to keep on going. And here we are, at San Remo, its lights neon red in the dark of the Mexican night; a space out of time, a time out of mind, and a second gathering of the tribes.”

In addition to the full Glastonbury 2022 line-up including the set times breakdown being revealed earlier this week, posters for dedicated stages and attractions have continued to be shared on social media as well as on the official Glastonbury website.

An example of one area which shared its line-up after the full schedule bill was announced is Strummerville, which revealed its poster just yesterday, on the 31st of May.

Yesterday also saw BBC reveal its coverage plans for this month’s Glastonbury Festival, which will mark the first time the Beeb has broadcast any music event in Ultra High Definition.

In other Glasto-news, last week (26th May), Glastonbury revealed a limited edition upcycled vest designed by Stella McCartney, available now from the official website shop with all proceeds going to War Child’s Emergency Fund – helping children in Ukraine and other conflicts.

In 2007, Stella McCartney designed a limited-edition vest which was sold for charity at that year’s Glastonbury Festival. The design, which features a blue sky, green field and psychedelic rainbow, was inspired by the Seventies airbrushed t- shirts her Mum and Dad used to get made.

Prior to the full line-up schedule with times being announced on the 30th of May, Block9 was the seventeenth area to announce its individual line-up poster (on the 27th of May) for this year’s Festival.