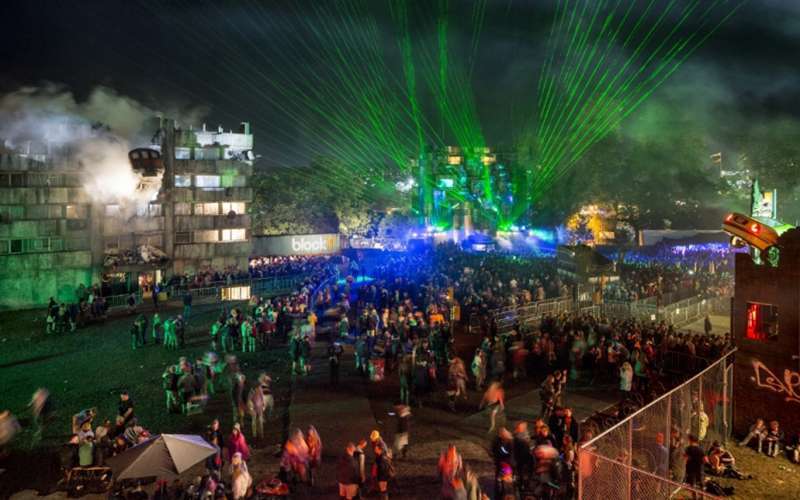 Block9 returns to the Festival after a three-year wait with NYC Downlow, Genosys Sound System tribute to DIY rave counterculture, the epic IICON and a brand new collaboration with Notting Hill Carnival

Block9 has unveiled details of its exciting return to Glastonbury Festival in 2022, with a range of acts including Todd Edwards, Floating Points, Honey Dijon, Hot Chip (DJ Set) and more.

Announcing the news this morning via social media, Glastonbury officials shared the line-up poster (seen below) accompanied by the message: “The incredible Block9 are back at Glastonbury 2022 with highlights including the queer nightlife institution that is NYC Downlow, Genosys Sound System paying tribute to DIY rave counterculture, the epic IICON and a brand new collaboration with Notting Hill Carnival.”

Previously described by Glasto as “a 24-hour wonderland of heavyweight sound systems, underground nightclubs, huge artworks and extremely alternative performance,” Block9 returns to the Festival after a three-year wait due to the forced cancellation of the Festival in 2020 and 2021, due to COVID.

The initial poster, seen below, features a platter of names which will be joining the ever-growing Festival line-up for 2022 and will be followed by the Block9 individual venue lineups in the coming days. 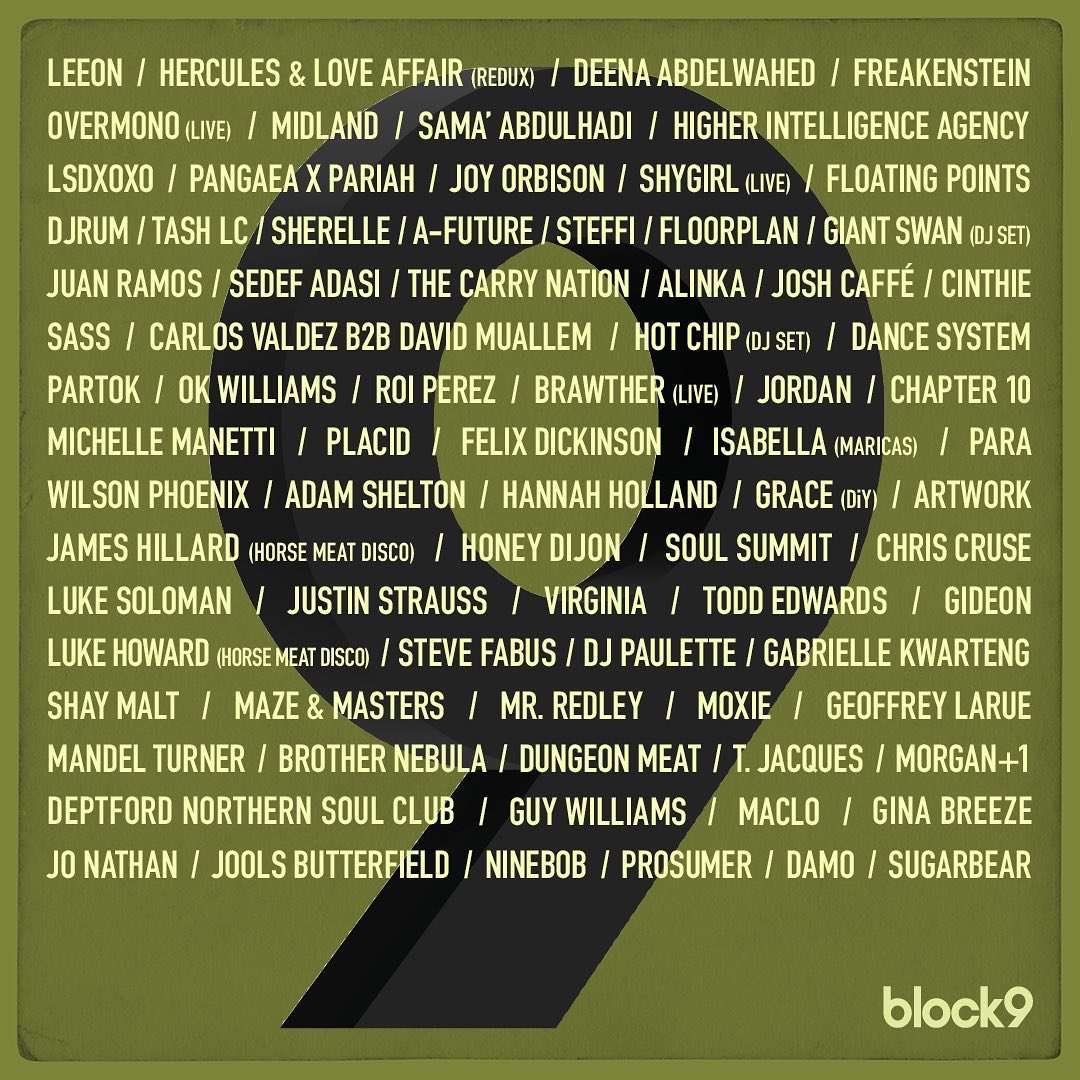 Since 2019, the Block9 area comprises two adjacent fields – Block9 East and Block9 West. In 2022 Block9 East will host IICON (which debuted in 2019 and can be seen in the video below), billed this year as “an epic monument to our digital, post-truth age” and a brand new collaboration with Notting Hill Carnival. Meanwhile, Block9 West will host the popular NYC Downlow venue, Meat Rack and Genosys Soundsystem.

Carnival processions will be seen throughout the Festival site with their main base being at the Block9 East Field, in addition to The Mangrove Steelband, DJs, and an eco-friendly carnival float among the festivities.

Glastonbury organiser, Emily Eavis said: “I’ve always loved Notting Hill Carnival, especially during my years living round the corner in West London, and there have been so many connections with Glastonbury over the years. It’s a dream to finally bring some of the very fine crew here to the Festival and I’m sure they will bring so much creativity, energy and insanely good music with their electric carnival procession, workshops and sound system base at Block9.” 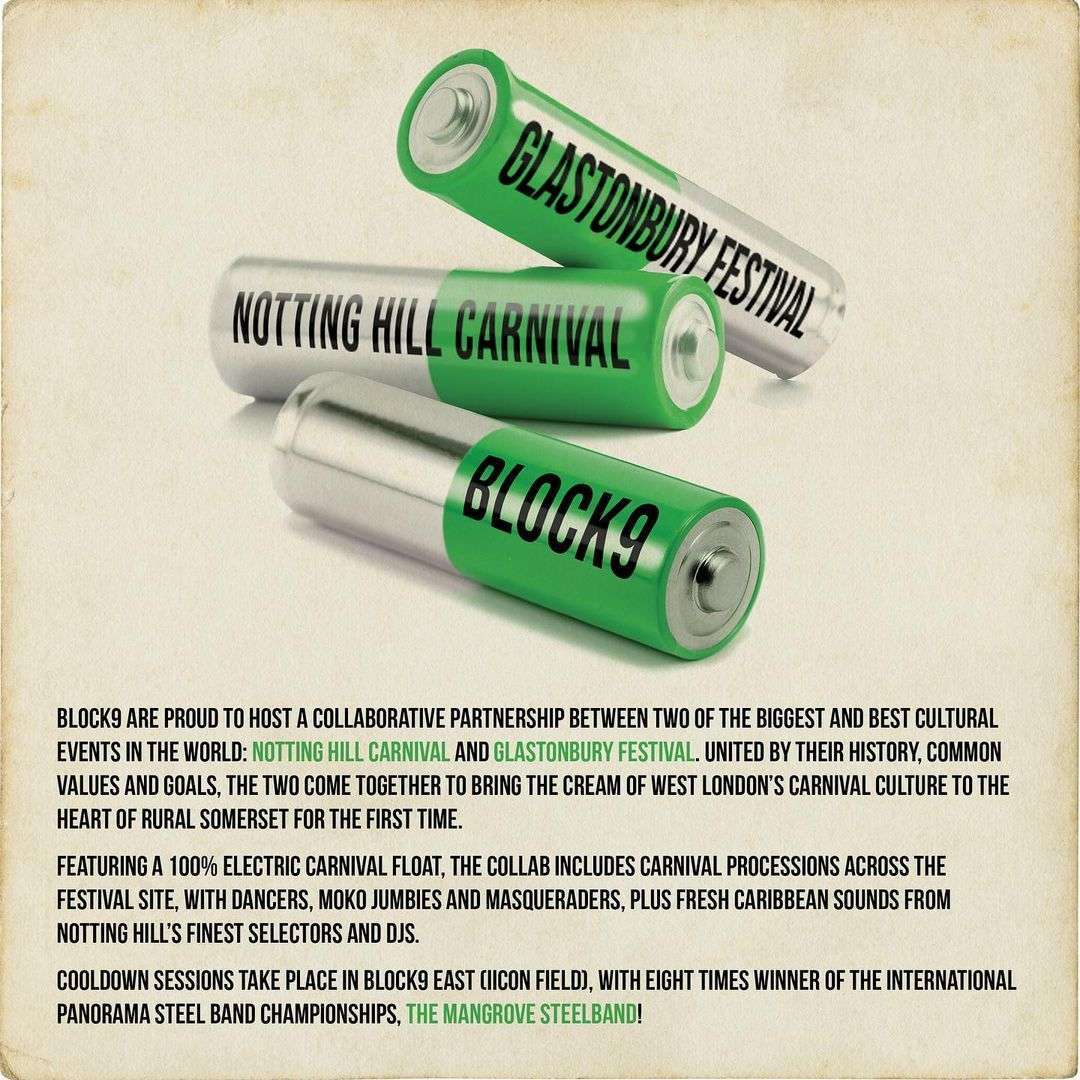 Notting Hill Carnival CEO Matthew Phillip also spoke about the collaboration: “This is a collaboration we have been working on for a while now and are delighted to finally be making it happen. The heritage and history of Notting Hill Carnival is hugely important to the British cultural landscape in many of the same ways as Glastonbury Festival is, and they hold many of the same beliefs and represent the country on a global scale. Block9’s vision to make this possible is incredible – they are famed for creating grand and unique experiences that I see are akin to many of the performers of Carnival in their scale and ambition. It’s going to be great”.

Block9 co-founders Gideon Berger and Stephen Gallagher said: “This year, Block9 is paying homage to the philosophy and spirit of [1992’s] Castlemorton [rave]. Thirty years on, we continue to fight for the utopian dream Castlemorton represented. A dream of music, community, and progressive inclusivity free from state control and corporate profiteering.

“Block9 is a direct descendant of the Castlemorton epoch and retains direct links to the people, DJs and crews behind the era-defining rave itself. Today, Block9 provides a festival platform for a new generation of artists and DJs upholding the very same political principles at the core of dance music both in 1992 and 2022.”

With Block9 being the seventeenth and most recent area to announce its individual line-up poster (on the 27th of May) for this year’s Festival, we are now expecting at least one more area announcement still to come in the form of Pilton Palais.

That said, Babylon Uprising might also drop its dedicated poster prior to the full Festival line-up plus times is released around June time.