Co-op has confirmed it will be returning to Glastonbury this summer after its pop-sup supermarket first appeared at the Festival in 2019.

As in 2019, the store will be stationed at its familiar location near Park Home Ground (marked in red on the map below) and will be open as per the following schedule:

With more than 200,000 people (including staff and performers) expected to descend on the largest greenfield music and performing arts festival in the world this June, Glasto-goers will once again be able to grab all their festival essentials from the Co-op’s barn-built supermarket.

The shop will stock items such as sun cream, rain ponchos, sandwiches, mixers, drinking water and ice – as well as more than 300 traditional supermarket food, drink and other products (as outlined in the multiple categories below). 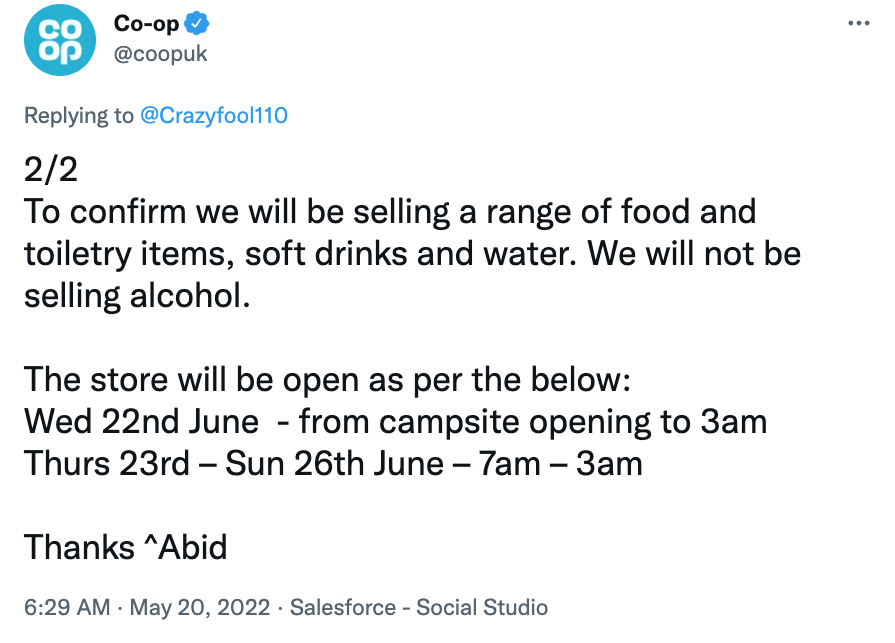 Due to contractual obligations, Co-op once again won’t be selling any alcohol at Glastonbury Festival this summer.

It will on the other hand stock Worthy Farm Reserve Cheddar (exclusive to Co-op), which was launched in February 2021 and is made using milk from the dairy herd that lives on the Festival site.

In a bid to reduce waste, Co-op will be following Glastonbury’s lead, after the Festival banned single-use plastic bottles from being sold on-site in 2019. As a result, the Co-op will only sell recyclable aluminium cans of spring water, in addition to refillable water bottles which can be filled from water taps on the site.

In March 2019, the Co-op was selected as Glastonbury Festival’s first-ever retail partner and established the bespoke, fully operational 6,000-square-feet food store at the Festival (seen in the images above).

In a statement ahead of their first debut appearance at the Festival that year, the Co-op said its partnership with Glastonbury Festival was “founded in a shared ethos of co-operation, community support, ethical values and campaigning to make meaningful change”.

In addition to the Co-op’s pop-up store, the Co-operative Group also committed to opening a permanent convenience store in the village of Pilton, adjacent to the festival site.

At the time, Glastonbury founder Michael Eavis said: “When I was a small boy there were three shops in this village. My earliest memories of going to the shop were to buy one penny packets of sherbet! Since then, one by one, the shops have closed and for several years we’ve had no shops at all.

“But now, thankfully we’ve managed to persuade the Co-op people to make a pledge and commit to trying to provide our marvellous village with a model village shop. We’re So lucky and my enthusiasm is shared right across the village!”

Co-op Director of Marketing Live & Local Amanda Jennings said: Music festivals create a happy, weekend community which we are perfectly placed to serve, getting closer to customers with our unique convenience offer, providing high quality and value for money essential items to help festival-goers make the most of their Glastonbury experience.”

Just over a year later in July 2020, the Somerset County Gazette reported Michael Eavis had opened Pilton’s new permanent Co-op store, which runs entirely on renewable energy and resurrected the Post Office in the building – that was non-existent since 2011.

He said: “It’s such a terrific thing to get these two most important parts of village life back again.

“Thanks so much for all of those who put in the spadework to make this happen bang in the middle of this wonderful village of ours.

“We managed to resurrect the Post Office in the building and, thanks to the Co-op, it will remain there for the good of the village for years to come.”