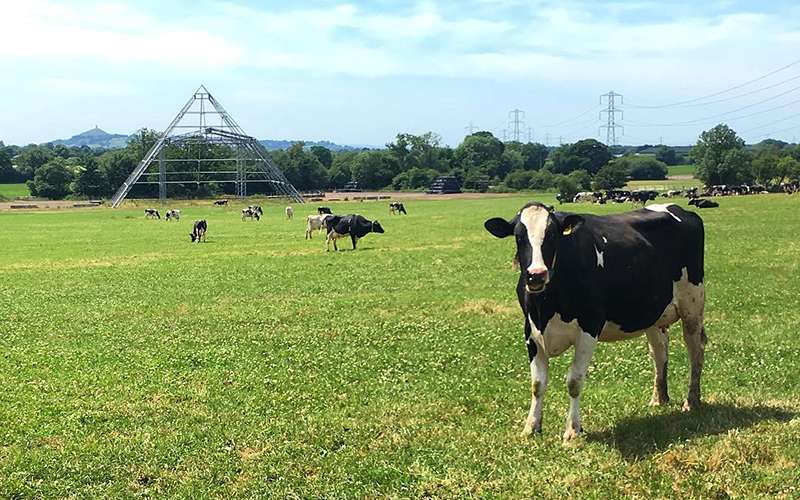 The Worth Farm cows have returned to the fields after one of the fastest Glastonbury clean-ups in history!

Less than two weeks ago, over 200,000 people were having the time of their lives at the biggest party on earth at Glastonbury Festival.

With the Worthy Farm-held event coming to a close last week and as most Festival-goers return home to civilisation – with some leaving behind what can only be referred to as the Glasto-aftermath – for award-winning farmer and Glastonbury founder Michael Eavis the work is far from over.

Following the Festival’s finale, the unsung heroes of the Recycling Crew stay on the grounds with the sole mission of returning Worthy Farm to its natural clean and rubbish-free status.

2022 has been one of the fastest Glastonbury clean-ups of the event’s history, with the first of the cows being spotted back in the fields (as shown in the image below) on Monday, the 4th of July – which is just over a mere week since the Festival ended this year on the 26th of June.

Some previous dates of the cows returning to the farm include;

The cows are back… 🐄🌿#Glastonbury #WorthyFarm #Cows

During the Festival the cows go into the Glastonbury “Moo-tel” for a short stay. The food is put in front of them so it’s like being on an all-inclusive holiday, explains herd manager John Taylor, in the video below.

Previously speaking about the cows and post-festival cleaning process, Eavis said: “We have 500 milking cows and 500 young stock,”

“The dry cows graze away from the festival site, but we have to keep the milking cows in to avoid any E. coli issues for our visitors.

“We have 400 people who clean up after the festival, with magnets to pick up any metal, and then we can turn the cows back out.

“There is a huge demand for milk in the UK, and for cheese and milk powder worldwide.

“It’s a massive industry and we should be proud of what we’re doing – our food is needed worldwide and the climate and grassland in Somerset are just right for milk production.”

“The grass comes back pretty quickly after reseeding, and on a year off from the festival, the cows will graze all summer – it’s lovely to see them out.”