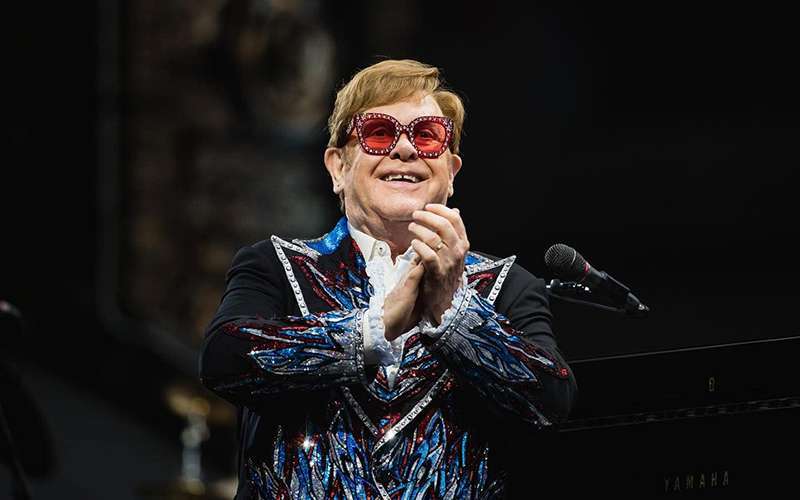 Elton John‘s name has been in and out of the Glasto Rumour Mill countless times before, but most predominantly over the past 4 years or so, after the announcement of his ‘Farewell Yellow Brick Road’ tour.

The tour – which kicked off in Allentown, Pennsylvania (U.S.) back in September 2018 – has endured several postponements due to the COVID-19 pandemic and, at times, John’s health.

The Elton John Glasto rumour has recently been ignited once again after the singer moved a previously scheduled date in Paris from Sunday, 25th June 2023 to Wednesday, 21st June 2023, and by doing so creating a perfectly-shaped-Glasto-gap in his schedule.

As of the time of writing, the Glasto-shaped hole in John’s touring dates spans from Thursday, 22nd June 2023 to Monday, 26th June 2023 and just happens to coincide with the Glastonbury 2023 dates, which will run from 21st June to 25th June of that year.

Below you can see screenshots taken from Elton John’s official website showing the new tour dates over what will be Glastonbury 2023 weekend, as well as the message from Accor Arena in Paris, France – addressing the postponement of the Farewell Tour.

Back in 2015, Elton John revealed that he has never been asked to play Glastonbury.

In a message addressing his hip injury Elton said: “At the end of my summer vacation, I had an unfortunate fall and have since suffered from considerable pain and discomfort in my hip. Despite intensive rehabilitation and specialized treatment, the pain kept getting worse and I found it increasingly difficult to move around. I was advised to have surgery as soon as possible in order to get back to my best and to ensure that there would be no long-term complications. I will begin an intensive rehabilitation that will allow me to fully recover and regain full and painless mobility.

“I will be attending the Global Citizen event in Paris on September 25, 2021, as I don’t want to let a charity down. It’s only five songs, but it’s very different physical work from playing for almost three hours every night on tour and traveling overnight from country to country. After that, I will undergo the surgery that will allow me to resume touring in January 2022 in New Orleans.

“I know how patient my amazing fans have been since Covid caused the tour to stop last year, and it breaks my heart to keep you waiting any longer. I completely feel your frustration after the year we have been through. I promise you this: the shows will resume next year and I’ll make sure the wait is worth it. With all my love, ”

Staying on the topic of the rumours; both the Spice Girls and Arctic Monkeys have recently been talked about as potinial performers at Glastonbury 2023.