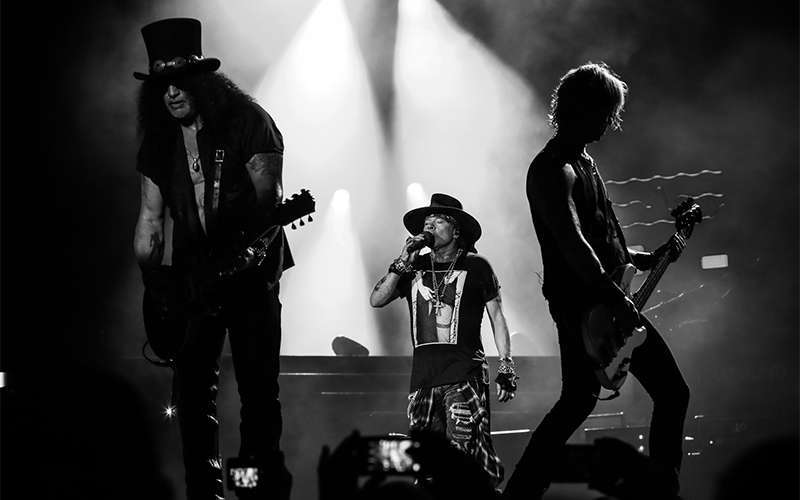 The statement came as an answer to a question Eavis was asked in a recent interview with Metal Hammer UK, which is celebrating four decades of Metallica in an all-star amassed special issue (out today – Thursday, November 11).

40 years. 40 interviews. The new issue of Metal Hammer celebrates four decades of @Metallica and is out NOW! Order yours from https://t.co/8Or023FKgq pic.twitter.com/JG64K3RmQH

Asked ‘Who’s the heaviest band you would book for the Festival?’ – Emily replied: “We had Napalm Death in 2017, and it doesn’t get much heavier than that! But I think Guns N’ Roses need to play here at some point don’t they?”

In the same interview, Eavis also mentioned the fact that Metallica definitely inspired the Glastonbury team to book more heavy rock acts, from Motörhead and ZZ Top to the Earache Stage over in Shangri-La.

Speaking about Metallica’s drummer and co-founder Lars Ulrich, Eavis said: “Lars came to the festival the night before they played, so we showed him round. We thought it might be a quick tour of the main stages, but it ended as the sun came up on the hill in The Park, having walked pretty much every inch of the site, which is many miles. We immediately bonded with Lars because he’s such a great bloke, and genuinely interested in what we do here, he got so stuck in. No one does that the night before they headline! He’s come back every year since with his family, and he is part of the family here now too. Meeting them for sunrise is part of the weekend tradition for us now.”

As of the time of writing, Diana Ross is the second artist to be officially announced as playing the 2022 edition of the Festival, with the first being Billie Eilish who was officially confirmed last month, and who will be taking to the Pyramid Stage on the Friday night – which will subsequently make her the Festival’s youngest ever solo headliner.

The most recent big-scale artists added to the Glasto rumour mill include Queens of the Stone Age, in addition to Crowded House which have confirmed themselves for a performance at the 2022 event, and Noel Gallagher who said he will be up for playing if asked.