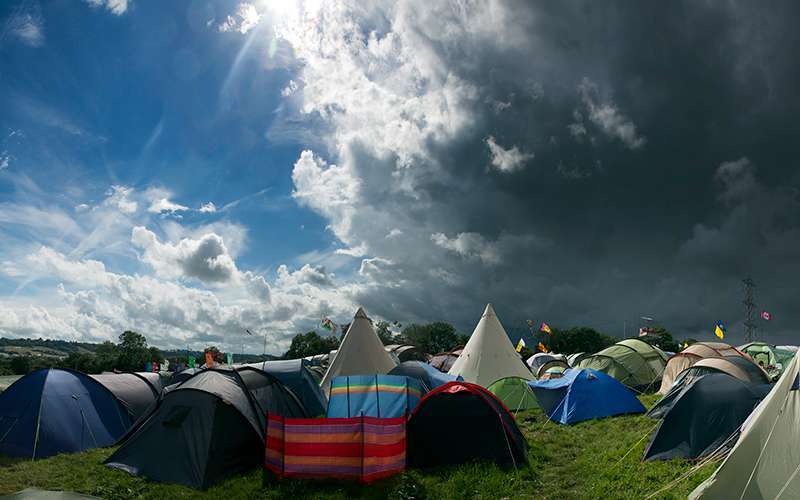 Glastonbury Festival is fast approaching and preparation is at its paramount for those lucky enough to bag the golden-ticket snitch to this year’s event.

Packing for Glastonbury is never an easy task as it is, let alone when you don’t know what the weather might bring – and although looking back at the Festival’s historical weather stats can be a lot of fun, it does not help with predicting the future highs and lows.

With it being exactly two weeks to the day until gates open on the largest greenfield music and performing arts festival in the world, we take an initial sneak peek at the first long-range weather forecast for this year’s Festival.

A word of warning though; a weather forecast two weeks ahead of any event is too uncertain for planning and could change dramatically with every passing day.

It’s also worth keeping in mind that 2019 looked pretty unpredictable until about a week prior to the festival with forecasts predicting “heavy thundery showers”, which by the weekend saw it change to light rain early in the week, then hot & humid later.

As of the time of writing, the Met Office’s long-range weather forecast reads that from mid-week (13th – 22nd June) “the most likely scenario is for low pressure to shift to the northeast of the UK, with high-pressure building from the west”.

Adding “that this would favour fine and dry weather across southern and southwestern parts of the UK, while the north, and especially northeast, remains cloudier and breezier with showers or longer spells of rain”.

However, at the end of June and early July (23rd June – 7th July), the weather is likely to become more unsettled again, with “lower confidence for this period” and a possibility for “above-average rainfall at first”, to be followed by “closer to normal [rainfall and temperatures] as we head into July”.

Glasto-weather fanatic, Gavin Partridge, has recently tweeted that Glastonbury weekend is now rapidly coming into an extended GFS (Global Forecast System) time frame, while adding that it’s currently “looking cool and showery for the 23rd of June […] but will probably change several times in the next couple of weeks”.

Partridge also confirmed that he will begin Glastonbury 2022 updates at the end of the week.

Looking at Accuweather‘s long-range forecast – the Wednesday of the Festival is currently predicted to be “mostly sunny” with temperatures expected to peak at 18°C.

The Thursday and Friday are down as being “cloudy with a passing shower”, with similar temperatures, while Saturday and Sunday (like Wednesday) are expected to be “mostly sunny”.

In addition to the full Glastonbury 2022 line-up including the set times breakdown being revealed last month (30th May), posters for dedicated stages and attractions have continued to be shared on social media as well as on the official Glastonbury website.

Strummerville revealed its line-up poster on the 31st of May, while new Beat Hotel replacement, San Remo, dropped the news on the 1st of June.

Glastonbury 2022 Festival App by EE is now available to download