Foals have entered the Rumour Mill as strong contenders for headlining the Other Stage at this year’s Glastonbury Festival.

As far as we know, the rumour was set into motion through a post on the eFestivals forums website and then pushed out to Twitter via a user who appears to be followed by some high profile Glasto-fan accounts.

Although the original forum post has since been deleted, the Twitter message which was posted on Saturday night (6 February) is still live and reads: “Foals headlining the Other Stage at Glasto is 👌”

The Twitter account that goes by the name of Matt, also pointed out that the source who initiated the rumour had previously been right on such predictions in the past, and added that the person in the know, is now also saying Sam Fender is set to play the same slot as Billie Eilish did at Glastonbury 2019.

Furthermore, taking a closer look at Foals’ 2022 tour dates, one could not but notice the perfectly shaped Glasto-sized gap in the schedule, as the band is set to play Cologne, Germany on the 21st of June and then Dublin, Ireland on the 27th – with nothing in between. 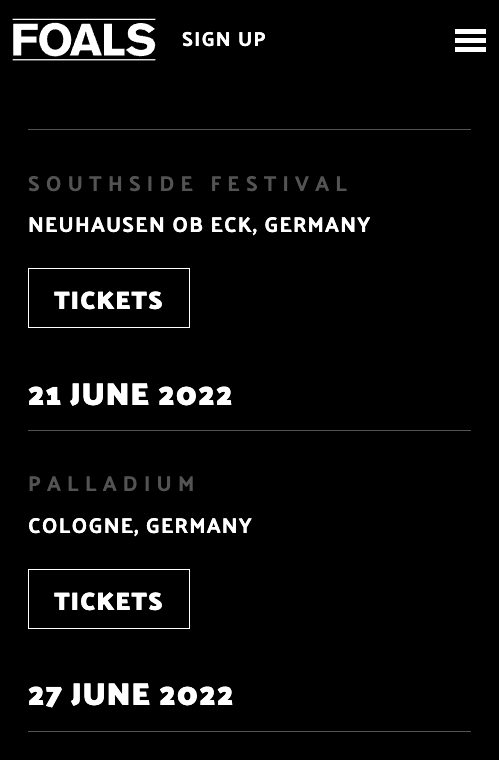 Foals, being no strangers to the Worthy Farm-held event, played Glastonbury in 2013, 2016 and most recently in 2019, as they ram-jammed the Park Stage with a secret set. The Oxford band had reportedly also turned down the slot before Florence + the Machine in 2015 (eventually taken by The Libertines).

Reviewing the band’s outstanding Friday night 2016 Pyramid Stage performance, the Telegraph then predicted: “one day they will headline”.

The Telegraphs’ Neil McCormick went on to write: “Any doubts I have harboured about Foals ability to fulfil their ambition to be Glastonbury headliners was dispelled by a massive, mesmeric set of alternatively flowing and pummelling mantric rock. It was the Oxford quintet’s first time on the Pyramid stage but it won’t be their last.”

The Oxford band have recently teased a short video clip featuring frontman Yannis Philippakis soundtracked by a trance-led new single, which was captioned “#2AM.” – you can listen to it below.

Glastonbury organiser, Emily Eavis, recently said that some news about Glastonbury 2022 can be expected by the end of the month (February), while also confirming that the first line-up poster will be released in March, with individual area line-ups to follow – before the full line-up plus times will finally drop in June.

As it stands, Diana Ross, Billie Eilish, R.A.E, Little Simz and most recently The Strays are the only artists to have been officially confirmed for playing Glastonbury Festival when it returns in 2022.