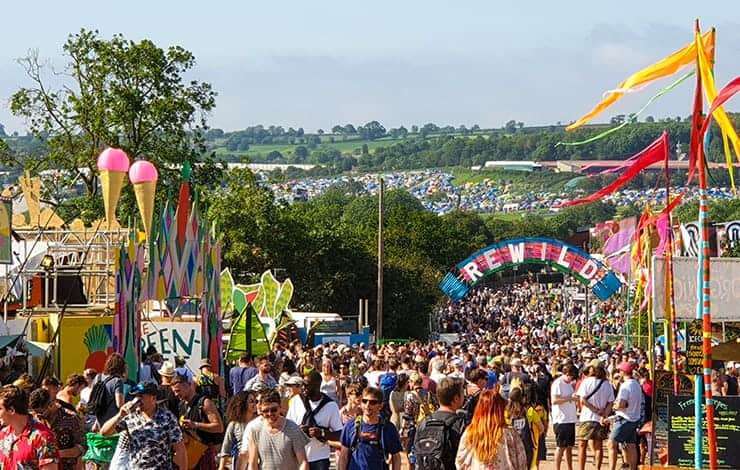 Glasto-goers set for a weekend heatwave

Worthy Farm is soaking in sunshine as thousands of festival-goers are sunbathing, while others are still making their way to Pilton for this year’s Glastonbury Festival.

Following the Met Office’s prediction earlier in the week that this “could be the hottest Glastonbury on record” – A spokeswoman for the national weather service is now saying temperatures could possibly reach the previous Glastonbury record of 31.2°C – measured at the last edition of Glastonbury in 2017.

“It’s going to be very warm in the South West over the next couple of days. Temperatures could be pretty hot,” said the spokeswoman.

“Today (Thursday, 27 June) the maximum temperature in the South West will be about 28°C.

“On Friday, it will be a little bit warmer at 29°C, possibly 30°C, felt across parts of the South West.

“There’s a small chance on Friday that temperatures could… reach the current Glastonbury record. At the minute, 30C is more likely but we’re not ruling out 31.2C.”

The Met Office spokeswoman added: “Saturday will still be very warm while Sunday slightly less so.”

Don’t forget the sun is strong right now, if you’re going out this afternoon…..the advice is to wear sunscreen 🧴 #UV pic.twitter.com/Qmvpx3bq4t

Caring for its festival-goers, Glastonbury officially advised ticketholders days prior to gates opening to prepare for the hot weather – suggesting attendees bring a hat, sunscreen and a reusable bottle for water.

The festival has also just shared some guidance and advise via their Twitter account saying “The sun is shining down on Worthy Farm. Please take a moment to read this advice on staying safe in the heat.”

The sun is shining down on Worthy Farm. Please take a moment to read this advice on staying safe in the heat. #glastonbury #glastonbury2019 pic.twitter.com/9cY7IatFTI

Although Glasto-goers aren’t barred from bringing plastic bottles onto the site, Glastonbury is taking an active role this year in encouraging everyone to bring a reusable water bottle with them and refill it at any of the 800 free water taps around the site. In addition to tripling the number of WaterAid kiosks (to 37) where festival-goers will be able to refill their bottle, free drinking water is also available from all bars across the site. The Festival has also said it will open extra shaded areas if needed as high of 28°C forecast.

Last week, leading Met Office climate scientist Professor Richard Betts said: “The world has warmed by more than 0.5°C since the 1st Glastonbury Festival in 1970. Temperatures in Somerset rose by 0.75°C. Atmospheric carbon dioxide rose from 325 ppm in 1970 to over 410 ppm this year.

A climate Q&A will be held at this year’s festival which will be hosted by Professor Betts, who was awarded an MBE earlier this month in the Queen’s Birthday Honours List. The Q&A  takes place in the Green Fields area at 3pm each day.

The festival – which first started in 1970 – is usually associated with mud and has seen its fair share of washouts and mud-baths, in addition to a few really (unbearable-to-some) scorchers.

Glastonbury 50: The Official Story of Glastonbury Festival
£11.71
View on Amazon