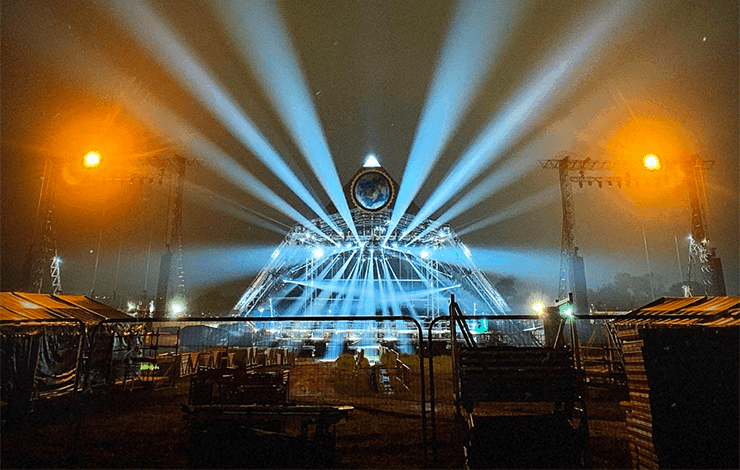 Following Glastonbury Festival opening its gates this morning at 8am, Glasto-goers and workers at the festival took to social media to share their photos of what the Worthy Farm site looks like so far.

Photos have been circulating the web depicting this year’s Pyramid and Other Stages ornaments in the week building up to the festival. The art pieces – which seem to be celebrating Planet Earth – first appeared online on artist Joe Rush’s Instagram account as seen in the photos below.

This is my piece from for the Other Stage at Glastonbury, the wasp is 12 foot tall,and made by Analisa Booboo.from steel rod, painting by Zadoc. Lit by Nick the face. I wanted it to read “insecticide is suicide”, but it was deemed a bit harsh, so we ended up with “insect rebellion”

Previous years’ decorations to the Pyramid Stage have included a lightning bolt symbol in honour of David Bowie, eagle wings attached to a peace sign and a mechanical phoenix – all designed by artist Joe Rush, whose elaborate works have previously featured at the festival and who Michael Eavis describes as “the glue that keeps it all going”.

“This is my piece on the Pyramid stage at Glastonbury this year, painting by Peter Rush, metalwork by Iain, Luke, Sam and Silver,” said Rush, sharing the image on Instagram. “There’s only one planet and we all breathe the same air.”

This is my piece on the Pyramid stage at Glastonbury this year, painting by Peter Rush, metalwork by Iain,Luke,Sam.and Silver There’s only one planet and we all breathe the same air..

One of the ways the environmental agenda will be championed at this year’s festival is by a procession led by Extinction Rebellion, Water Aid and Greenpeace which will kick off from The Park at 4pm tomorrow.

On the Thursday of #Glastonbury2019, there will be an #ExtinctionProcession, allowing you to stand up against a climate catastrophe. It begins in The Park at 4pm & culminates with a giant human sculpture of an hourglass in the Stone Circle at 5.30pm.
Info: https://t.co/prQwBZPrkY pic.twitter.com/WpC8vT5F3e

Festival-goers are due to be greeted by temperatures of up to 23°C from mid-afternoon, for what is predicted to be one of the hottest Glastonbury’s to date.