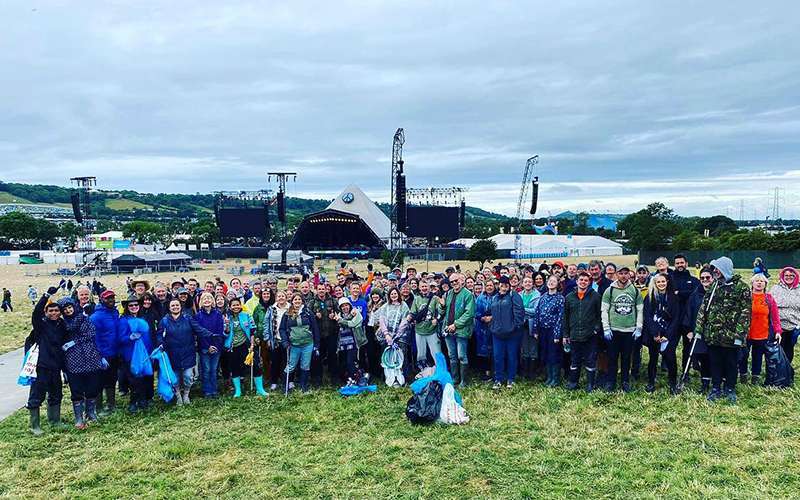 It has now been almost two days since over 200,000 people have returned home to civilisation from the world’s biggest party, after experiencing what in most cases is a life-changing experience.

Campers started packing up their belongings and leaving the Glastonbury Festival site on a chilly Monday morning (27 June) as rain started to descend – following defied ominous forecasts of thunderstorms and a yellow weather warning from the Met Office.

As with every Glastonbury-year, there is one thing that can always be counted on to stay long after everyone has returned home – Yes, you probably guessed it – THE RUBBISH.

So if you’re at home, or work, or any other place away from Glastonbury, tending your long-lasting hangover and revisiting your new formed memories, know this – on the farm, the work has just begun.

The Glastonbury clean-up litter picking army is already deep-dug down into work on returning Worthy Farm to its natural clean and rubbish-free status.

This year the Glastonbury Festival Recycling Crew had over 2000 volunteers, of which, there were 26 different charities raising money for their organisations. Back in 2019, the crew’s charities managed to raise over £60,000.

Although significant progress has already been made, the entire process of cleaning up the whole site will take proximally a month to complete.

As you’d expect, the litter-picking crew encounters all sorts of rubbish throughout the clean-up – from the expected disposable cups and food wrappers to what would one day hopefully be the unexpected; tents, blow-up airbeds, camping chairs and such things which really have no place in being tagged as “rubbish”, as they are people’s own belongings, left behind.

Critical Waste, the team who manages The Recycling Crew at Glastonbury Festival, has managed the waste at the Worthy Farm-held event since 2008.

The company prides itself on being “a sustainable waste management company who specialises in clearing up and recycling at events and festivals”.

Also hard at work are the Wessex Water teams which are busy taking away sewage waste from the site.

Around 9,720,000 litres of waste will be treated at their water recycling centres – Just for comparison, that’s the size of four Olympic swimming pools!

The Glastonbury ‘Love the Farm, Leave no trace’ mantra, is central to the Festival’s philosophy.

And with such a large amount of people on the land during the Festival, it’s very important to minimise the enormous impact this makeshift city has on the countryside in which it stands.

Below we have listed some key points that Glastonbury has taken toward waste prevention and recycling, and sewage waste management – as well as what you can do to help;

What you can do to help:

How to go to Glastonbury Festival (almost) for FREE

During his historic headline performance, Macca wowed the crowds with a show-stopping setlist which included surprise guest appearances from both Foo Fighters frontman Dave Grohl as well as American-born Bruce Springsteen.

Other highlights included Diana Ross commanding a mammoth crowd at her Sunday teatime Legends Slot. The Motown soul singer treated the crowd to a selection of classics including I’m Coming Out, Baby Love, You Can’t Hurry Love, Stop! In The Name Of Love and at the conclusion of Chain Reaction pink confetti was launched from the stage.

While on the Saturday of the Festival, we found out Lily Allen was making her way to the Glastonbury site, thanks to an Instagram story she shared that afternoon, for what turned out to be a surprise secret guest appearance with Olivia Rodrigo on the Other Stage.