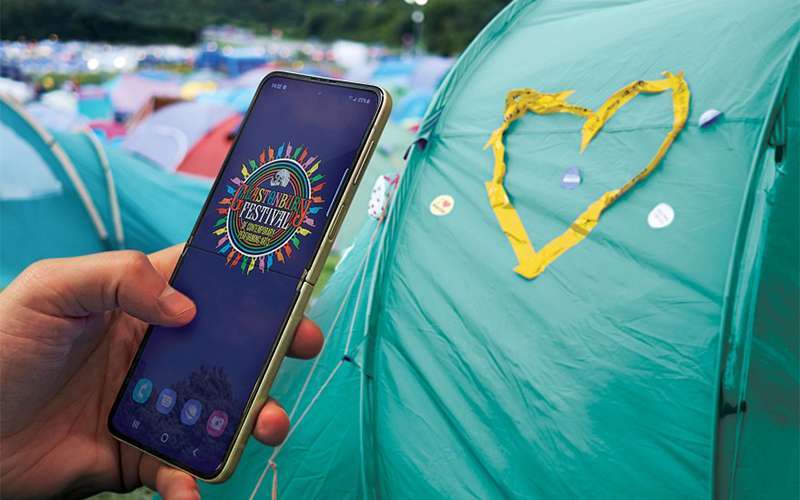 The official Glastonbury 2022 app is now available to download on both iPhone and Android (via the links below).

The application, created by EE – Glastonbury’s technology partner for the seventh year running – is the only official app for the Festival and gives music fans the chance to stay connected with the latest live Festival updates, navigate their way around the 900-acre site and even create their own personalised line-ups.

The app, which according to an official statement by EE was originally due to be released on Monday, the 6th of June, finally went live on Android on the 7th of June – and after a slight lunch delay, saw the iPhone version be released one day later, on the 8th of June.

Bringing its “superfast network” to Worthy Farm, EE will be installing seven temporary masts, adding to the two permanent sites it previously installed to cover the farm.

In its long-standing partnership with Glastonbury, EE has designed this year’s free app for everyone – whether users are heading down to Worthy Farm this June or watching from home, the app is filled with content and features tailored to enhance the users’ festival experience wherever they are watching.

EE has developed the app to ensure music fans don’t miss any of their favourite performances, allowing users to curate their own shareable Festival line-up and view information about artists and their performances.

For those using the app to enhance their festival set up at home, the same functionality will be available to plan their line-up from the performances that will be broadcast on BBC.

Back by popular demand, and with a new functionality that allows users to see which direction they are moving in, the interactive map (which is a skimmed down version of the full map published earlier this year) allows festival-goers to get their bearings by identifying where they are within Glastonbury Festival’s grounds and find their way to the iconic stages.

Furthermore, a newly introduced Dark Mode also means the revamped app’s performance uses less battery than its predecessors, so fans can check up on Festival developments whilst knowing that the app will consume less battery than ever before.

Therefore, as part of EE’s offering at Glastonbury, music fans will also have access to a wide range of charging options available at the EE Recharge Tent, including Wireless and USB C charging stations, charging compatible phones in under 30 minutes.

Open from Thursday to Sunday between 10am and 10pm, the EE Recharge Tent can be found on the official Glastonbury map, via the app, and will have chargers that are free to all, regardless of network.

Wireless and USB-C charging stations will also charge compatible phones in under thirty minutes, taking the stress away from running out of battery, losing friends or not being able to snap photos and send messages during the weekend’s festivities.

This is the third year that the official application has been released in June, with EE releasing the app both in 2017 and 2019 on the 7th of the month, despite previously saying the 2019 app would be released in May.

The official Glastonbury Festival app from EE, developed by Digitas, is now available to download for iOS users here and for Android users here.

Emily Eavis at Glastonbury Festival commented: “We’re really pleased to announce EE as our technology partner for the seventh year running, providing the best possible network for our rural site, as well as free charging facilities and the official app.”

Pete Jeavons, Marketing and Communications Director at EE, said: “Over the years we have worked with the team at Glastonbury to use our technology to improve the experience of festival goers – whether that’s keeping your phone charged, getting in touch with friends at the festival or sharing memories with those that aren’t there. With the increasing data demands seen at live events across the country, we are working hard at Worthy Farm to make sure we have a network in place that can cope with these demands.”

In other Glasto-news, last month (26th May), Glastonbury revealed a limited edition upcycled vest designed by Stella McCartney, available now from the official website shop with all proceeds going to War Child’s Emergency Fund – helping children in Ukraine and other conflicts.

In 2007, Stella McCartney designed a limited-edition vest which was sold for charity at that year’s Glastonbury Festival. The design, which features a blue sky, green field and psychedelic rainbow, was inspired by the Seventies airbrushed t- shirts her Mum and Dad used to get made.

In addition to the full Glastonbury 2022 line-up including the set times breakdown being revealed last month (30th May), posters for dedicated stages and attractions have continued to be shared on social media as well as on the official Glastonbury website.

Strummerville revealed its line-up poster on the 31st of May, while new Beat Hotel replacement, San Remo, dropped the news on the 1st of June.