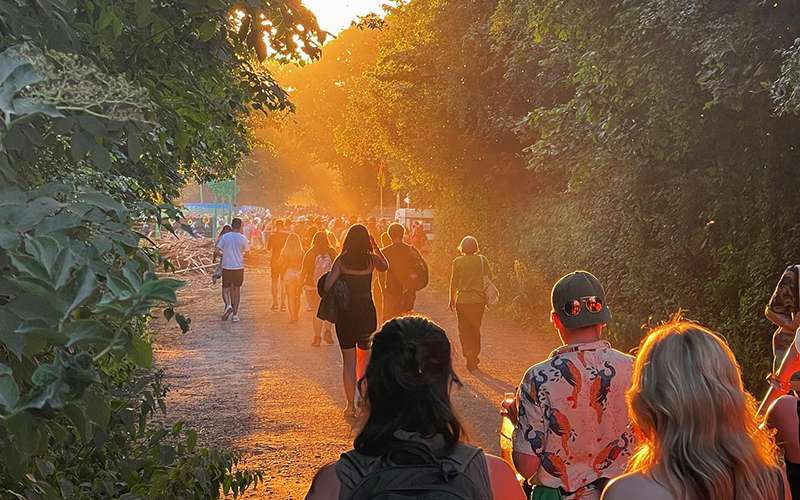 The final day of Glastonbury 2022

Glastonbury is back after three long years, as earlier this week, on Wednesday, the 22nd of June, the Festival finally opened its gates in what was a very emotional start to the Festival.

Friday saw the main stages open and featured performances from the likes of Foals, The Libertines, Sam Fender, St Vincent, IDLES, Blossoms, Sigrid, Phoebe Bridgers and Primal Scream – with a headline set on the Pyramid Stage from Billie Eilish which made history as the youngest ever solo artist to headline the Festival, at only 20 years old.

Saturday featured another historic moment when Paul McCartney took to the Pyramid Stage at 9:30pm – and by doing so made him the oldest Glastonbury headliner, at 80 years young.

If that wasn’t enough, the legendary Beatle brought out a couple of surprises in the form of Dave Grohl and Bruce Springsteen who joined him on the Pyramid Stage.

As always, if you’re not attending the Festival, BBC has you covered with wall-to-wall coverage and will continue live streaming hours of live music from the main stages so you can enjoy the Festival from the comfort of your home – more on this below.

Scroll down and follow our Live Blog below as we bring you a mixture of highlights, breaking news, surprise sets, photos, videos and updates on what’s going down on Worthy Farm at Glastonbury 2022.

Letting things go at the Burning Louts in The Park.

What a way to end the weekend with @feelmybicep. 💪@bbcglasto: Watch on @BBCiPlayer | Listen on @BBCSounds pic.twitter.com/KCv9hlkKEh

This year’s Sunday night headliner Kendrick Lamar has taken to the Pyramid, in what already looks to be a very elaborate production. You can watch along here.

Kendrick Lamar performing on the Pyramid Stage at the Glastonbury Festival at Worthy Farm in Somerset.

Joe Rush‘s 40ft memorial Burning Lotus will be set alight above The Park area at midnight tonight, with all your messages and tributes inside – after starting with the soulful, magical music of Ava Massenet from 11:30pm.

A beautiful chance for us all to let go of the bad stuff and remember those we’ve lost. Read more about it here. 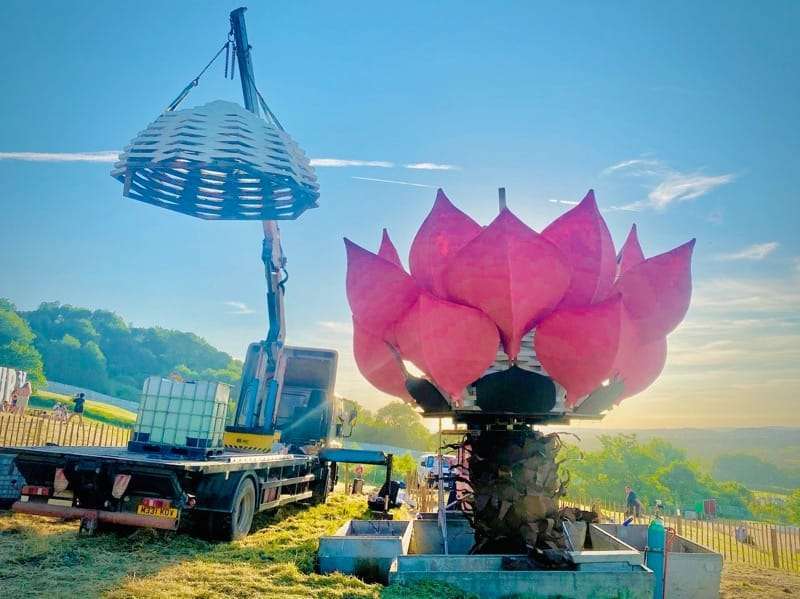 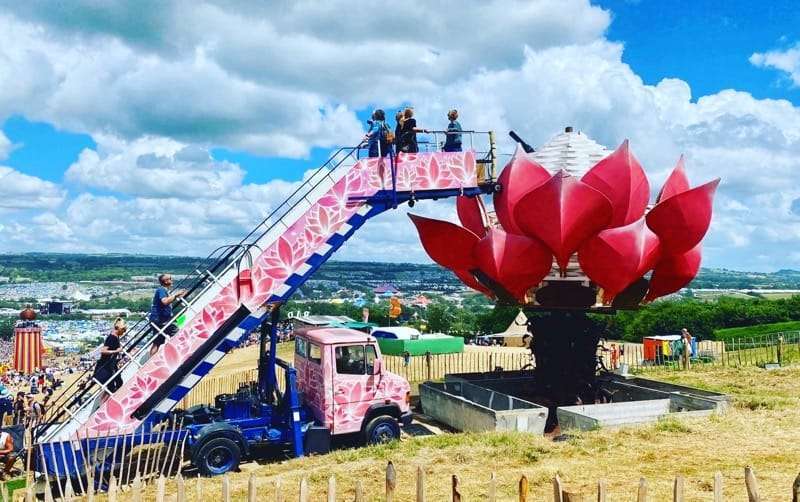 Officers detected a drone flying over the Festival site last night and identified its operator outside the perimeter fence.

Airspace is restricted during the festival and drones are prohibited – A man in his 30s will be interviewed on a future date. 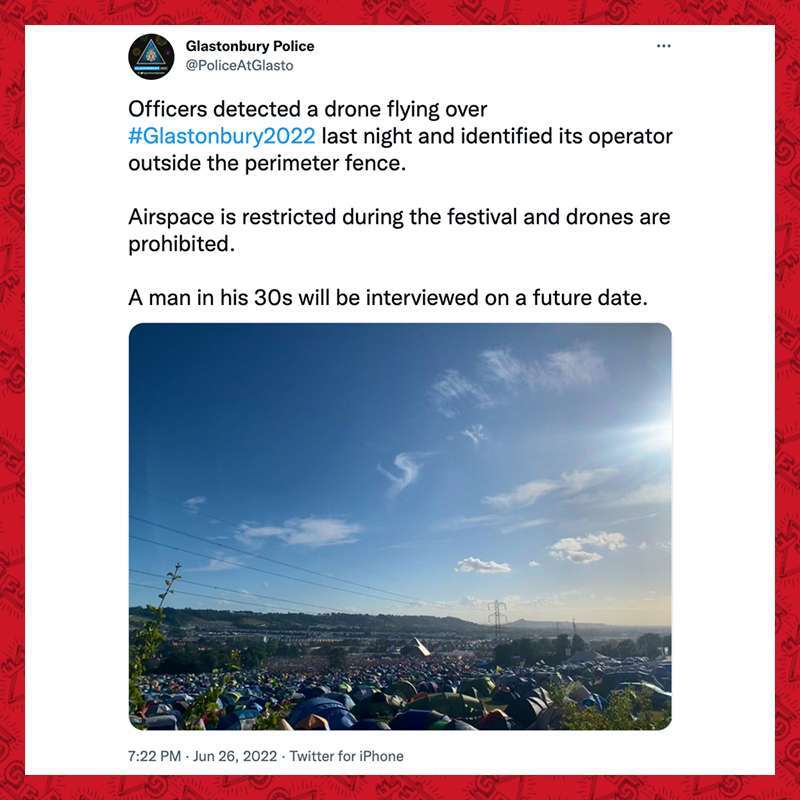 Jack White just casually rocking up to do a secret set and stealing the weekend. Literally smashed it out of The Park 🎸 pic.twitter.com/Tz5Qzpdq6X

Some tips for drivers who will be leaving the site to head home. See below. 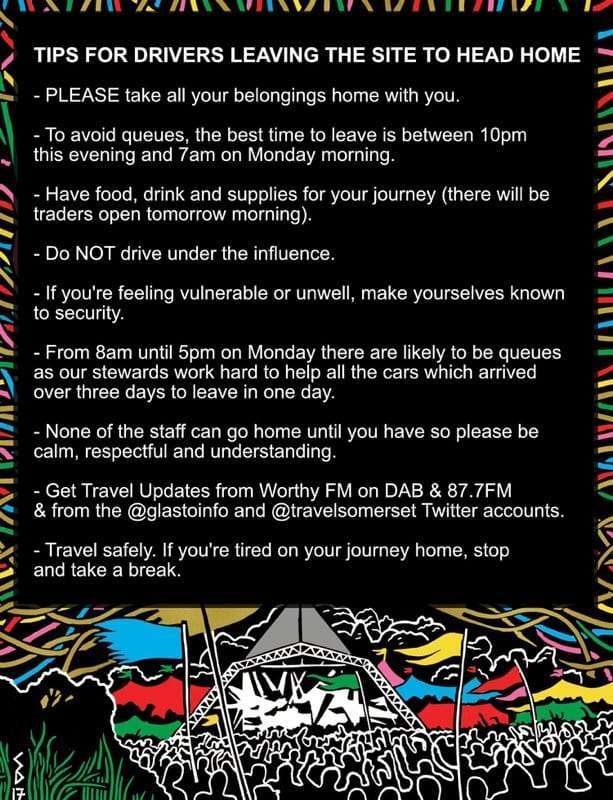 Yungblud has confirms he’ll be playing a secret DJ set on the BBC Introducing Stage at 7:20pm this evening. 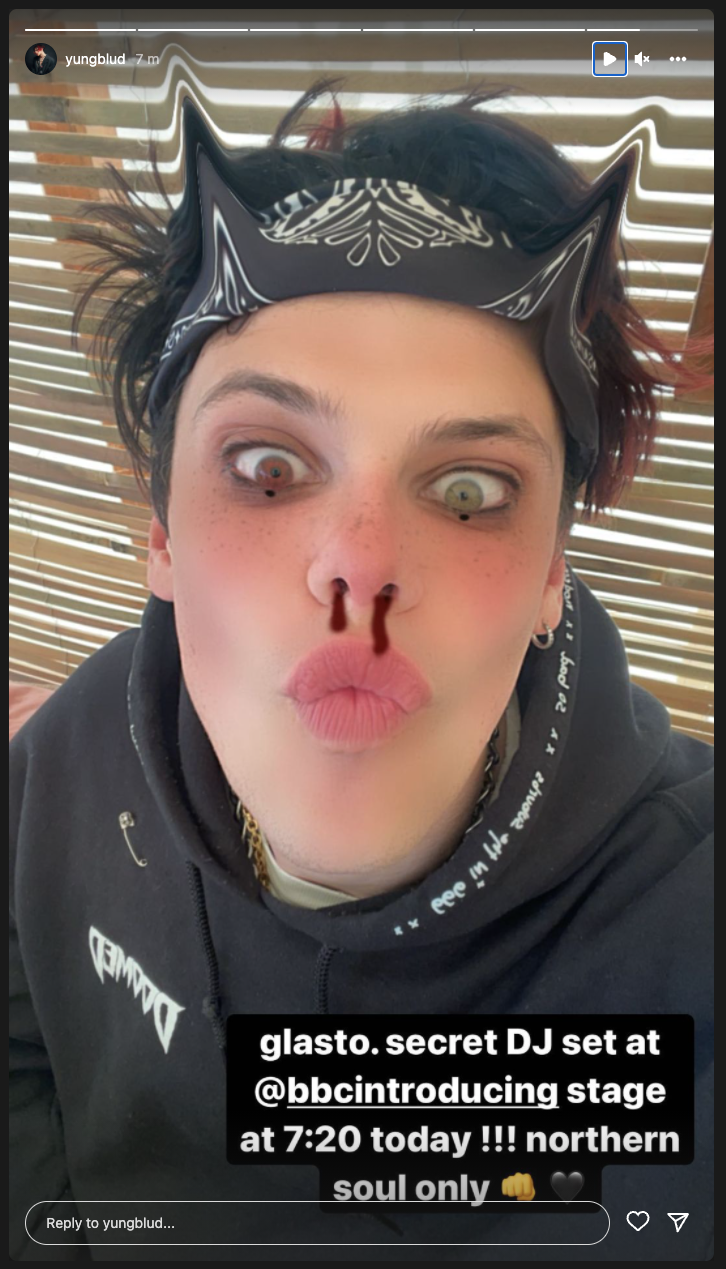 Talk of Glastonbury’s large crowds for its teatime Sunday Legends Slot is prevalent, but honestly, that is A LOT of people for Diana Ross. Watch her live here. 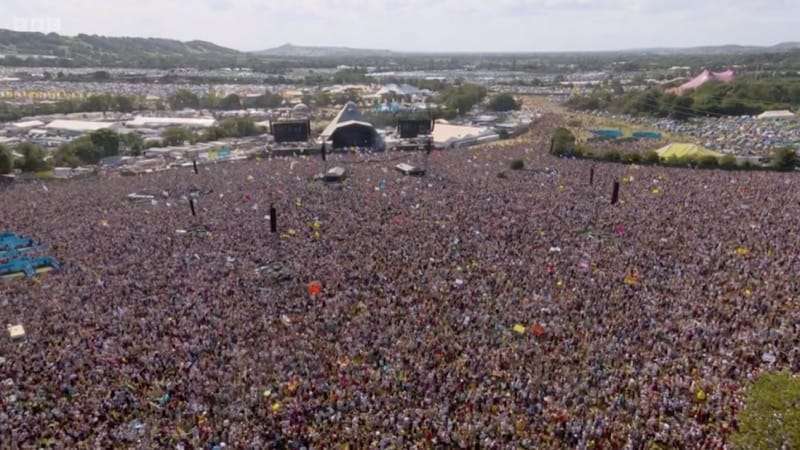 It’s time for Diana Ross to take to the Pyramid Stage, and the crowd is amassing. Watch her live here.

A LOT of love incoming for Diana Ross – this is as crowded as The Pyramid’s looked during the daytime all festival KG pic.twitter.com/jjKFQ7JTbG

With today being the last day of the Festival, Glastonbury organiser Emily Eavis is asking attendees who are starting to think about packing up, to please take everything home with them – “Let’s leave this beautiful valley in the state that it deserves”. 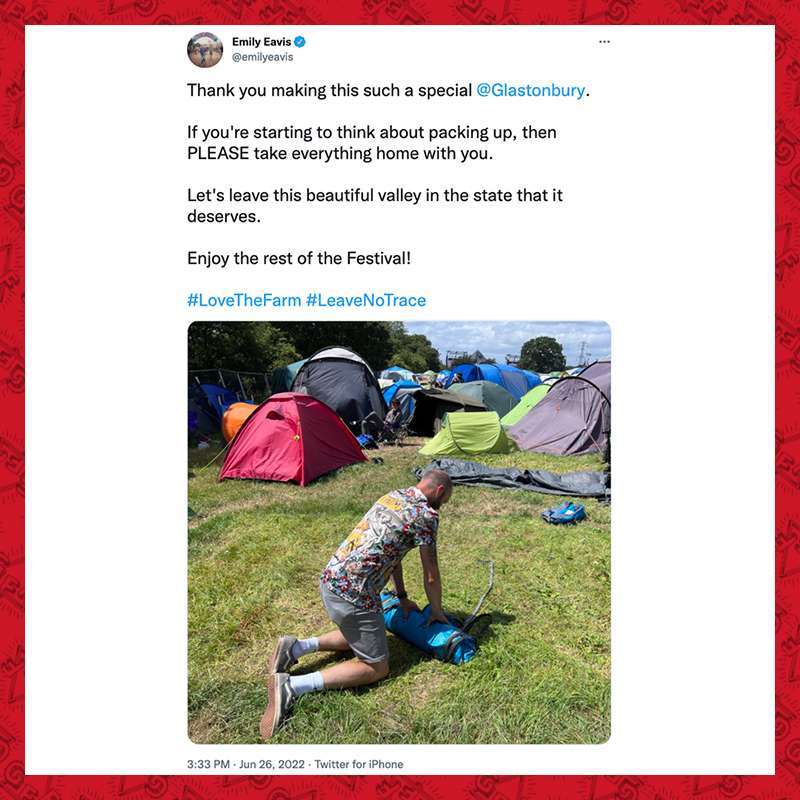 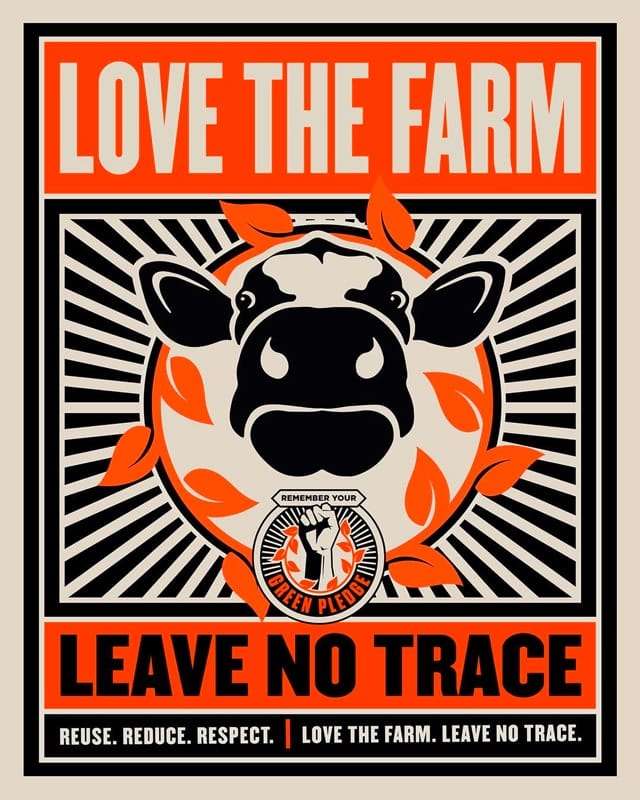 For those not at Farm, BBC has you covered with wall-to-wall coverage and will continue live streaming hours of live music from the main stages so you can enjoy the Festival from the comfort of your home.

Although the main stages opened this morning with Kojey Radical kicking off the Other Stage at 11:00am, and Black Dyke Band on the Pyramid at 11:30am – the BBC’s live streaming won’t start until 1:30pm this afternoon.

Below you can view a running order of all the Sunday set times (BST), along with a live BBC iPlayer link for each.

Glastonbury organisers have now officially confirmed Jack White as the second secret set to be announced today. He will be playing The Park Stage this evening at 6pm! 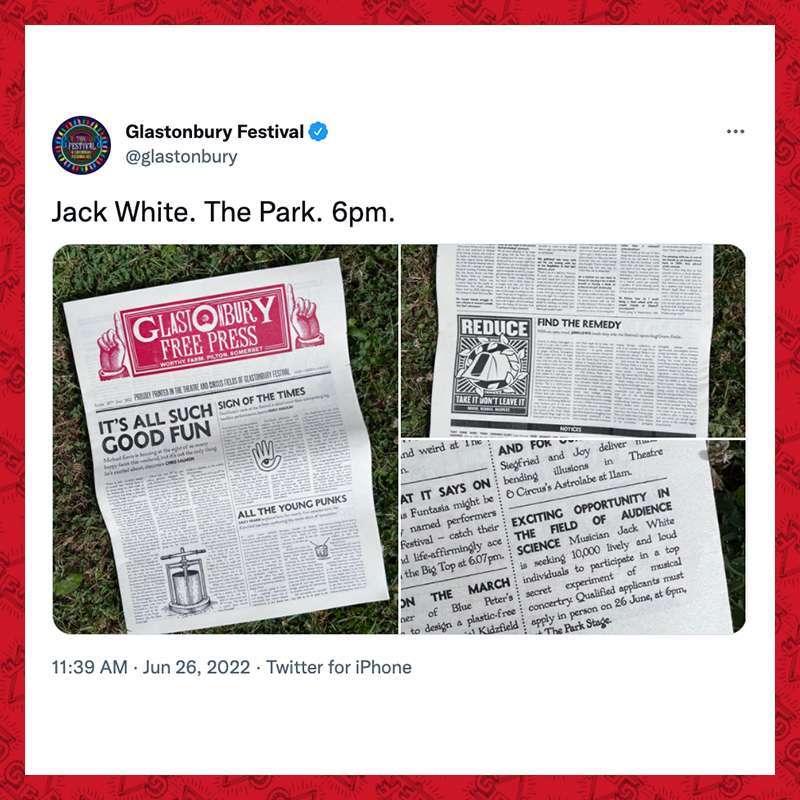 George Ezra has confirmed to being today’s John Peel Tent ‘Secret Set' and will be taking to the stage at 2pm.

You can now view our full list of this year's "secret sets" here. 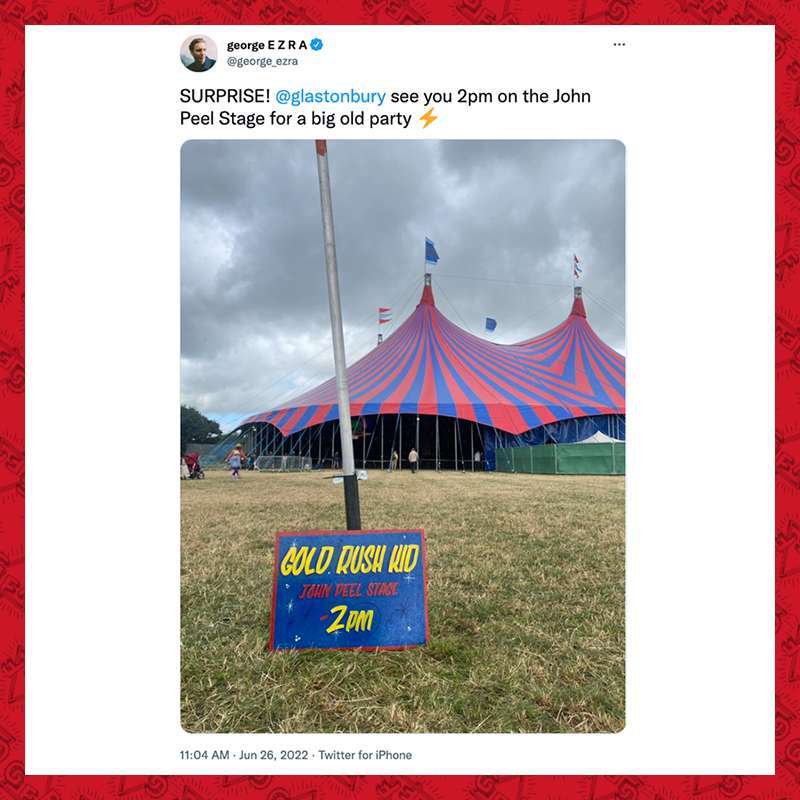 Yesterday at the Festival, Sir Peter Blake's new portrait of Michael Eavis was unveiled by Jarvis Cocker (on Blake's 90th birthday). The portrait will be displayed at the National Portrait Gallery when it reopens in 2023. 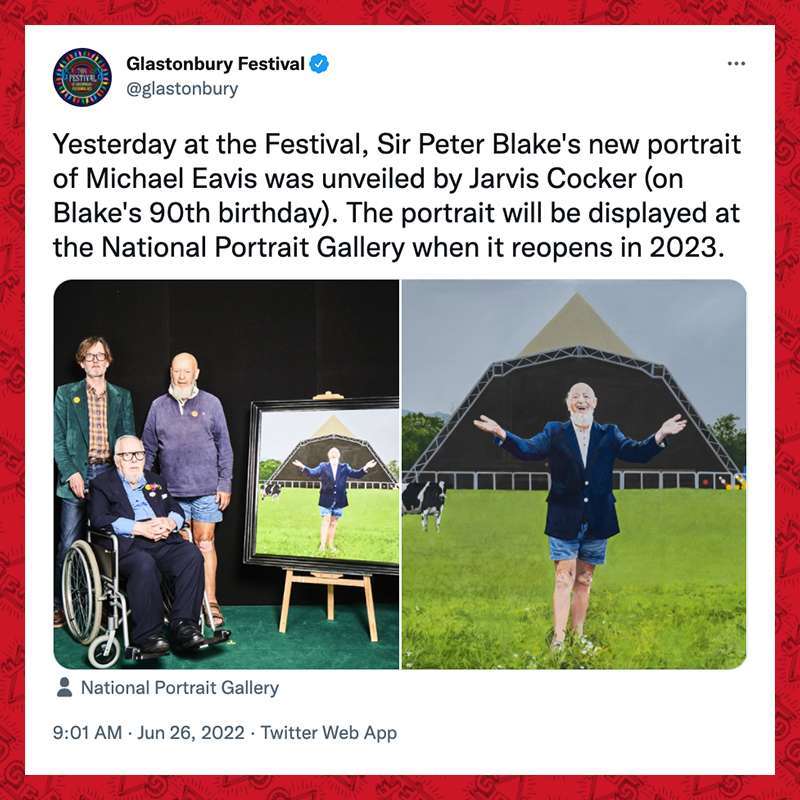 Despite some wind and rain at times, the weather has been holding up nicely for the most part of the Festival, with mostly dry conditions so far.

On the last day of festivities, Met Office predicts much of the same with sunny spells and blustery showers through the day, reaching a maximum temperature of 21°C.

That said, there's a possibility of heavier rain heading into the evening as Kendrick Lamar prepares to take to the Pyramid Stage for his much-anticipated headline slot.

Unsettled conditions will pick back up as we head into Monday for the exodus of campers and the start of the clear-up,  with more showers expected.

While we were all fast asleep, well... we say we, but Shangri-La we're having a 5AM Sunday service. Praise be! 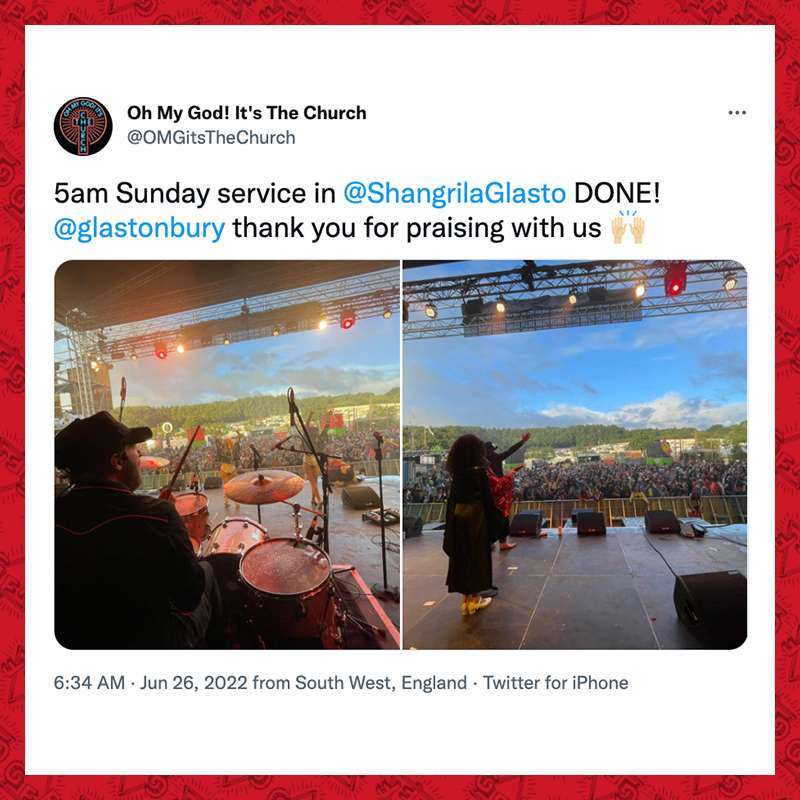 Good morning and welcome back! Join us over the coming hours, throughout the final day (and into the early hours of the next morning) of Glastonbury, as we continue to bring you the highlights, news, pics and updates from Worthy Farm.

As you head into the final day of the Festival and indulge in this beloved Brigadoon, always remember that the journey of Glastonbury is not about the destination, but about exploration...  Have a great day!