Glastonbury Festival is finally back after three long years.

Wednesday the 22nd of June, saw Glastonbury finally open its gates after three long years, in what was a very emotional start to the Festival.

For those not at Worthy Farm, BBC has you covered with wall-to-wall coverage and will finally start live streaming hours of live music from the main stages so you can enjoy the Festival from the comfort of your home.

Follow our GlastoLiveBlog below as we’ll be bringing you all the highlights, breaking news, surprise sets, photos, videos and updates on what’s going down on Worthy Farm at Glastonbury 2022. 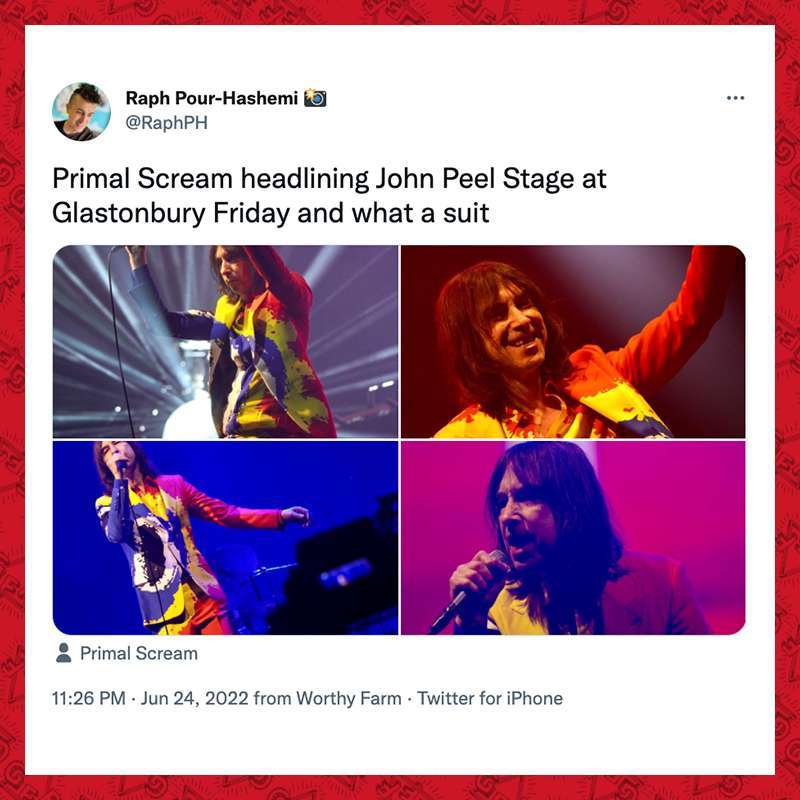 Toddler going crazy for Sam Fender on the Pyramid Stage – arms in the air and everything. Look! 👇

Someone has shared a short video clip (seen below) of what appears to look like Stormzy walking around the Festival site, with a hat on head and some kind of mask.

Dick and Dom confirm they’ll be DJing for an hour and a half from 9 PM tonight (Friday, 24th June) at the Village Inn Bar!

Dick and Dom will be DJing for an hour and a half from 9 PM tonight (Friday, 24th June) at the Village Inn Bar! 🎧🎶 👀#Glastonbury2022 #Glastonbury @dickndom pic.twitter.com/ikIYpF2T08

Glastonbury organisers share a message asking people to remember their Green Pledge and always use the toilets – as peeing in hedges or on the land is harmful to the farm and its environment. 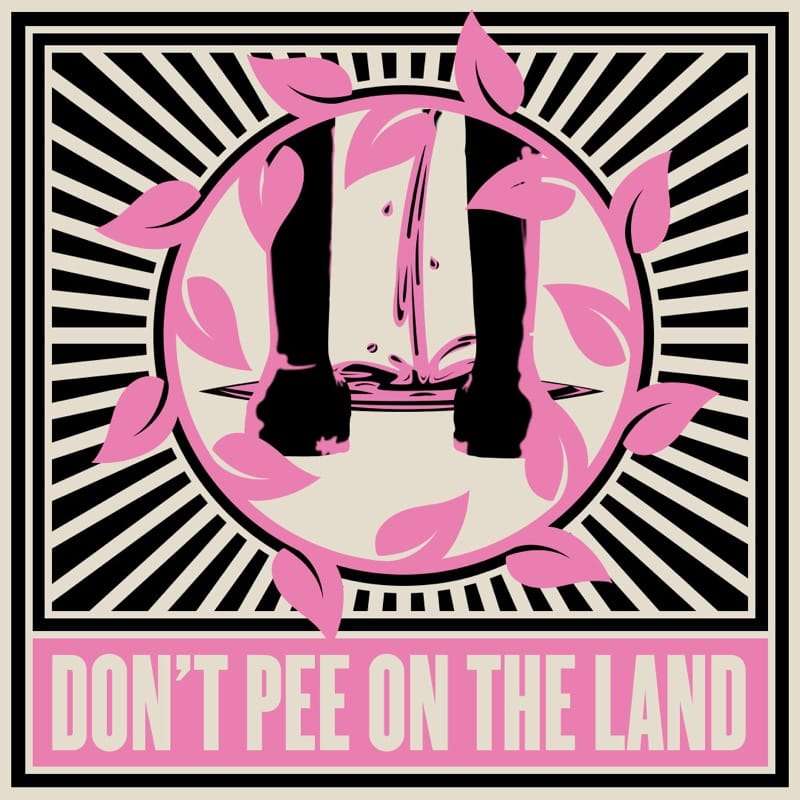 According to Glastonbury photographer Raph Pour-Hashemi – both Chris Martin and Dakota have been spotted on-site at the John Peel Stage watching Phoebe Bridgers. 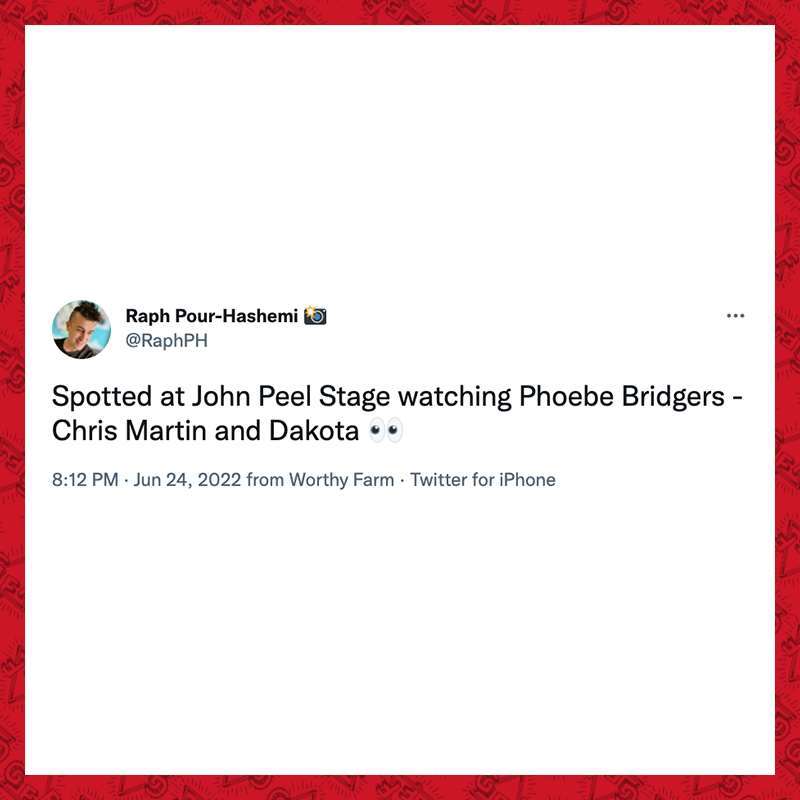 Those who’ve been following Wolf Alice‘s ‘road to Glasto’ over the last couple of days know it hasn’t been an easy task. After being stranded in Los Angeles due to cancelled flights, the band only made it back to the UK a few hours ago and are set to take to the Pyramid Stage at 4:45 PM. Someone on Twitter has envisioned what it might look like when they finally do: 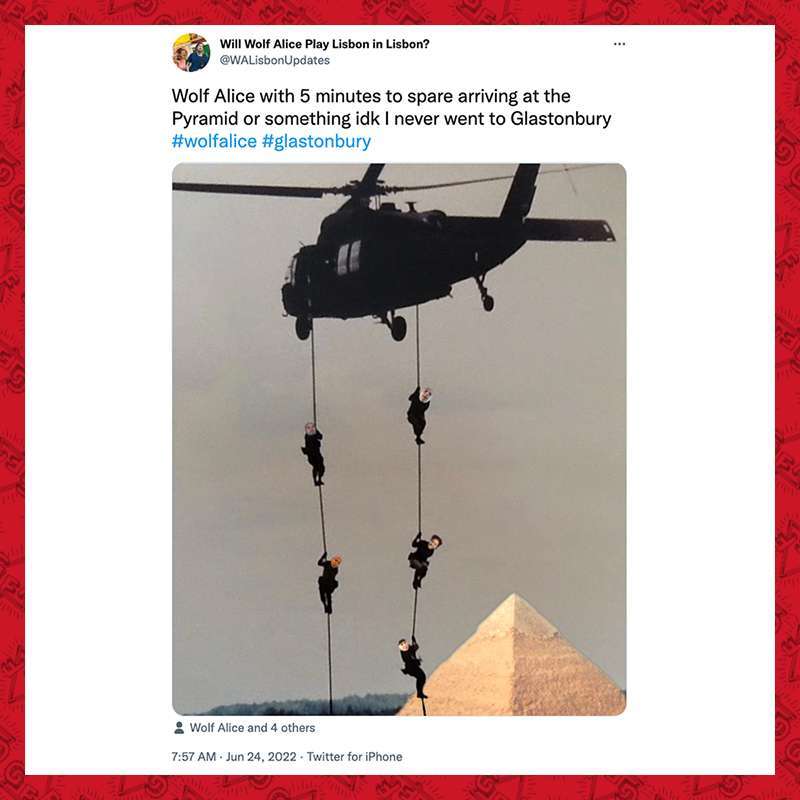 After playing a DJ set at William’s Green yesterday afternoon, ex-Spice Girl Mel C, AKA Sporty Spice, has now joined Blossoms on the Other Stage as a ‘spcial guest’, and the crowd is loving it – as seen in the video below.

Blossoms have just been joined by a very special guest to play Spice Up Your Life.

This is Mel C’s #Glastonbury and we’re just living in it. pic.twitter.com/m1xsLGPfEy

Wet Leg pull in a large crowd to The Park, as they take to the Stage for their 2 PM afternoon performance – which is also broadcast live online by the BBC here.

The dance duo were confirmed for Glastonbury earlier this week after many rumours and were set to perform tonight (Friday, 24th June) at 11 PM on the Arcadia Spider.

In a message to fans, The Chems explained that due to one-half of the duo, Tom Rowlands, not feeling well they have no choice but to pull out. Read the full message below. 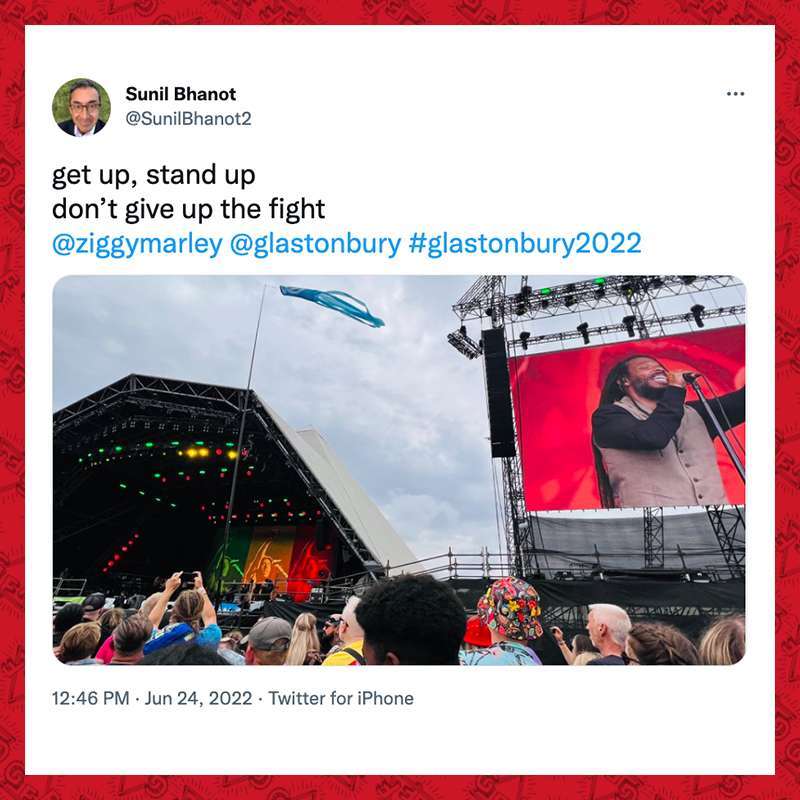 Ukraine’s Volodymyr Zelenskyy was just played on the big screens at The Other Stage, shortly before The Libertines’ stage-opening set – saying: “Glastonbury is the grates concentration of freedom these days, and I ask you to share this feeling with everyone who’s freedom is under attack…” 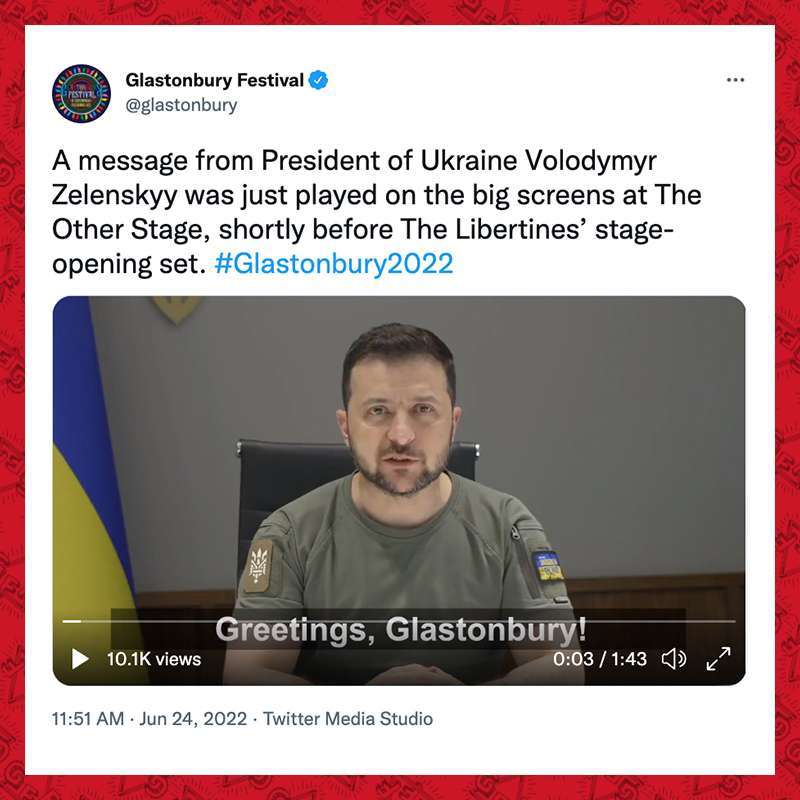 Fans gather in anticipation for The Libertines who are about to open the Festival’s main stages music line-up and will take to the Other Stage at 11:30 AM. 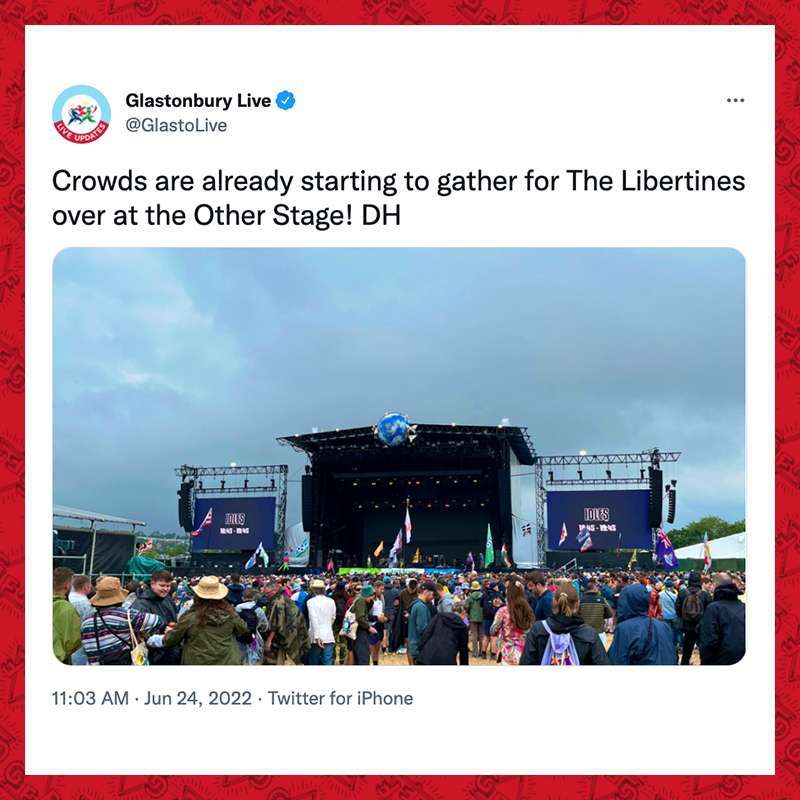 Although the main stages are set to open this morning from 11:30 AM, with Ziggy Marley opening the Pyramid at 12:15 PM, and The Libertines kicking off the Other Stage at the same time – the BBC’s live streaming won’t start until 1:45 PM this afternoon.

From 1.45pm you’ll be able to find live coverage of the following stages on @bbciplayer…

📢💨REPEAT; WOLF ALICE ARE BACK IN THE UK! 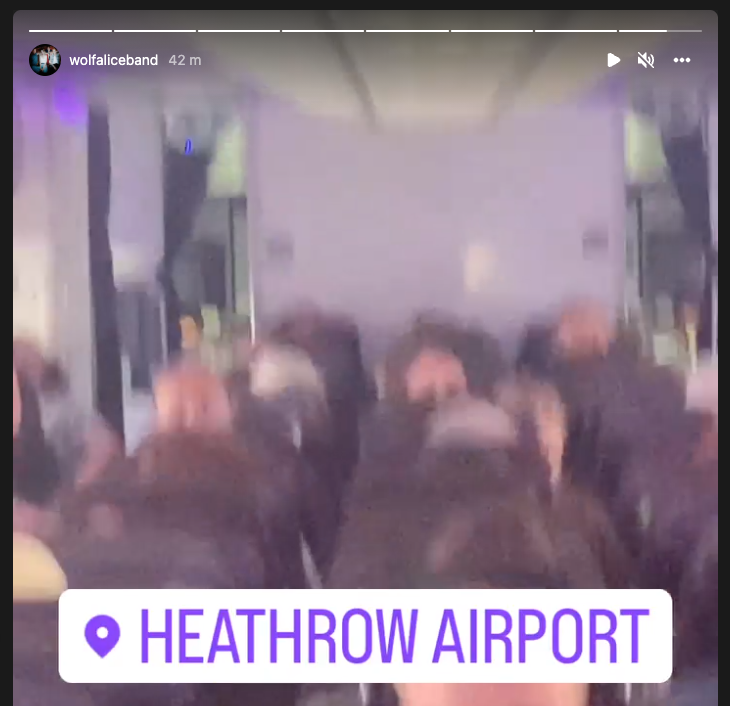 Incredible shot of Glastonbury 2022 as captured yesterday morning by Jon Mills and James Dadzitis from 3400 ft high. Jon says: “If you are interested in these kind of things, because of flight restrictions this was taken from 2.5 miles away from the site at a height of about 3400 ft with our fearless photographer Jameshanging out the window of a Cessna.” 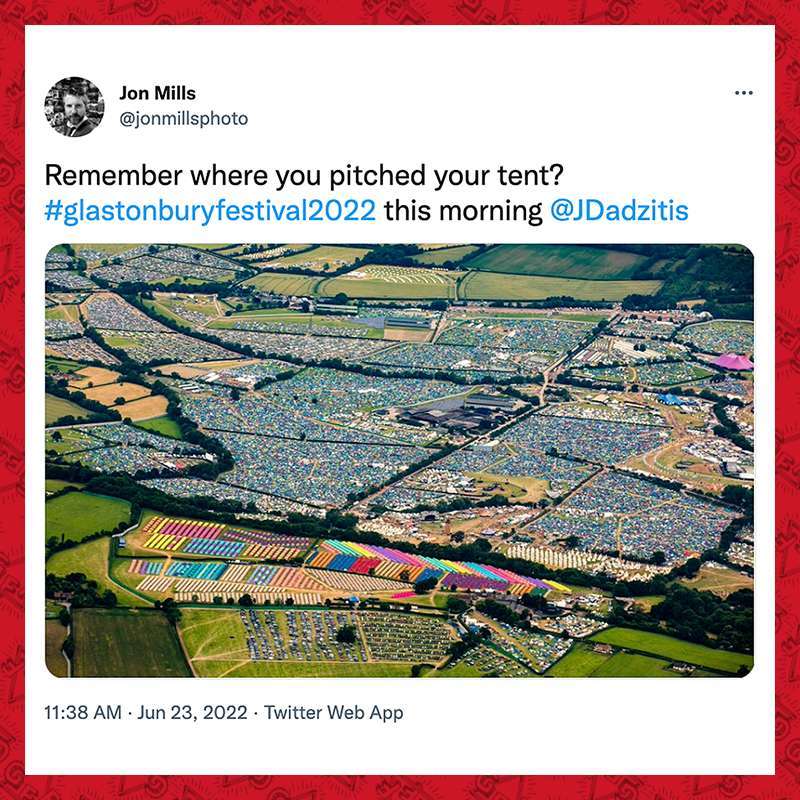 West Holts stage organiser, John Kerridge, shares an image whilst standing on the stage looking out ahead of Nubiyan Twist opening today at 11:30 AM.

Day one of the festival was sunny, temperatures reaching almost 27C in nearby Yeovilton, but it’s now becoming more unsettled.

Met Office Chief Forecaster Paul Gundersen said: “Our advice would be to have raincoats at the ready for the rest of the festival. After a warm and, at times, sunny start to Thursday it will turn cloudier and there will be an increasing risk of thunderstorms through the afternoon and evening bringing a risk of torrential downpours”.

For Friday and the weekend, the weather will become cooler and more unsettled. The risk of heavy showers and thunderstorms continues in the Glastonbury area, and although these should be quick moving, some surface water might accumulate at times from the heaviest showers. Temperatures will return to near normal for the time of year, with highs likely around 18-20C by the weekend. It will become breezier over the weekend.

The unsettled pattern is expected to continue to dominate into the start of next week.

If you’re at @glastonbury, you may be affected by the #YellowThunderstorm tomorrow morning ⛈️

Use your #SkyMobile data to ensure you’re always connected, and stay safe out there 💙 pic.twitter.com/IgXwBACXDG

The Glastonbury Live Twitter team out and about early Friday morning capturing the Pyramid Stage ahead of its opening day – ahead of Billie Eilish.

After an emotional start to the Festival on Wednesday, which continued yesterday into Thursday, our GlastoLiveBlog is back and ready for the first day of the main stages at the BEST PARTY ON EARTH!

THURSDAY RECAP: Photos and highlights from the second day of Glastonbury 2022