Stay in the loop with our Thursday Glasto Live Blog…

Yesterday, Wednesday the 22nd of June, saw Glastonbury finally open its gates after three long years, in what was a very emotional start to the Festival.

Today, thousands more Glasto-goers are expected to arrive at Worthy Farm despite the continued rail strikes and thunderstorm warnings from Met Office.

follow our live blog feed updates including photos, videos, general information and teasy tasters of what’s going down on Worthy Farm at Glastonbury 2022.

A beautiful midnight shot (captured by Sunil Bhanot) depicts the night full of laser lights on the backdrop of a distant Pyramid Stage – marking the end of the second day of Glastonbury 2022, and the start of Friday, when the main stages are set to open. 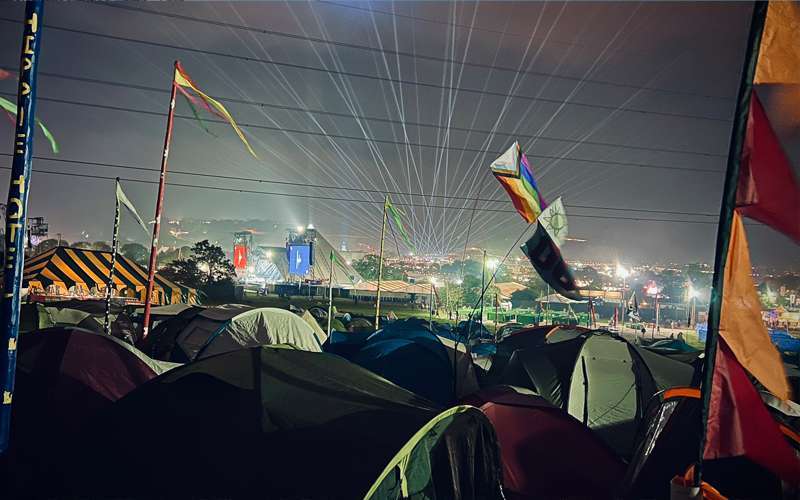 Glastonbury founder and living legend Michael Eavis took to the William’s Green Stage tonight (Thursday, 23rd June) to play a heart-warming cover set ahead of Bastille’s (not so secret) show.

Glade by night. AS pic.twitter.com/nDj6Ebnyst

Bastille confirms they’ll be taking to the William’s Green Stage this evening – saying: “See you soon William’s Green (and sorry for the delay everyone who’s been waiting!)”

See you soon William’s Green (and sorry for the delay everyone who’s been waiting!) #Glastonbury2022 😱 pic.twitter.com/PeUbAE1UVv

Some fans at the Festival have spotted Louis Tomlinson on-site, as seen in the video below.

This isn’t the first time the ex-One Direction has been spotted at Glastonbury, with the most recent being in 2019.

In addition to his Avalon slot on Friday and Rabbit Hole gig on Sunday – Nick Mulvey has now self-confirmed he’ll also be playing the Ancient Futures Stage in the Tipi Field tonight (Thursday, 23rd June) at midnight. 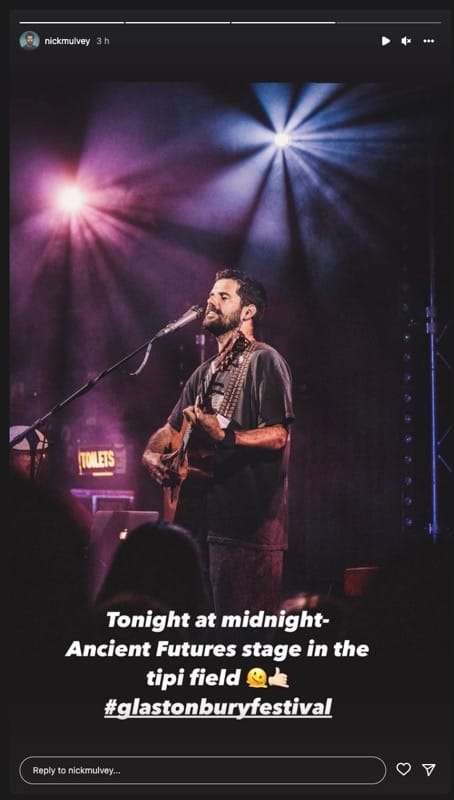 BBC Entertainment Correspondent, Colin Paterson, shares a photo of Nanny Pat, which all she wanted for her 80th birthday in 2020 was a ticket to Glastonbury. Two years later and she is finally getting to go: “I like to get to the front by sneaking down the sides.”

This is Nanny Pat. For her 80th birthday in 2020 all she wanted was a ticket to Glastonbury. Two years later and she is finally getting to go. “I like to get to the front by sneaking down the sides.” pic.twitter.com/dJhPTiOofD

Glastonbury officials ask people to try and avoid the William’s Green area for a few hours and head to other parts of the site, as it is currently very busy.

William’s Green is currently very busy. Please try to avoid that area for a few hours and head to other parts of the site.

The iconic Glastonbury Band Stand opened this afternoon at 2 PM with first performance from Hodmadoddery and will run till around 00:00 tonight. See the full line-up schedule for the day in the image below. 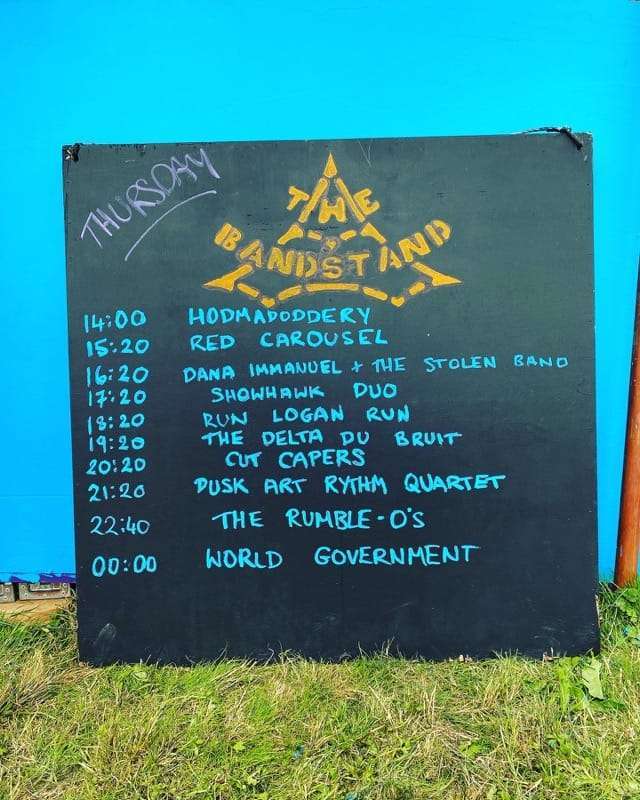 Portaclue: The world’s crappiest escape room will run at Glastonbury 2022 from 11:00 – 19:00 on the Thursday, Friday, Saturday, and Sunday of the festival, in Bella’s Field. You can read more about it here. 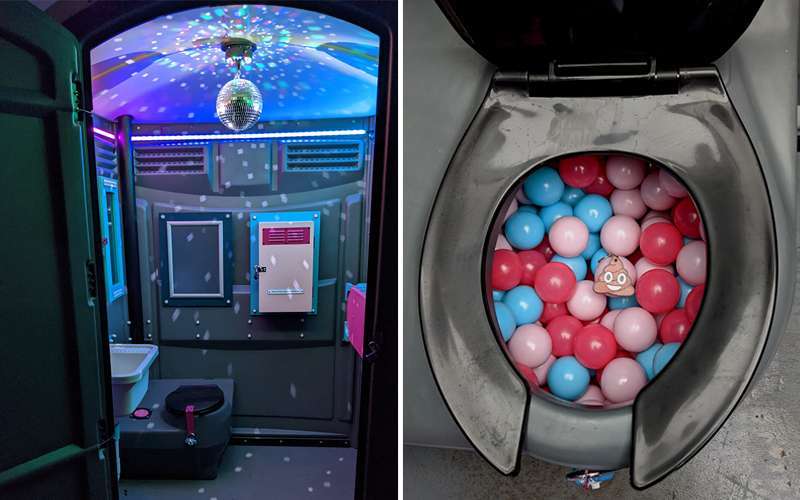 Day one of the festival was sunny, temperatures reaching almost 27C in nearby Yeovilton, but it’s now becoming more unsettled.

Met Office Chief Forecaster Paul Gundersen said: “Our advice would be to have raincoats at the ready for the rest of the festival. After a warm and, at times, sunny start to Thursday it will turn cloudier and there will be an increasing risk of thunderstorms through the afternoon and evening bringing a risk of torrential downpours”.

For Friday and the weekend, the weather will become cooler and more unsettled. The risk of heavy showers and thunderstorms continues in the Glastonbury area, and although these should be quick moving, some surface water might accumulate at times from the heaviest showers. Temperatures will return to near normal for the time of year, with highs likely around 18-20C by the weekend. It will become breezier over the weekend.

The unsettled pattern is expected to continue to dominate into the start of next week.

If you’re at @glastonbury, you may be affected by the #YellowThunderstorm tomorrow morning ⛈️

Use your #SkyMobile data to ensure you’re always connected, and stay safe out there 💙 pic.twitter.com/IgXwBACXDG

The Crows Nest line-up for today, Thursday the 23rd of June is as follows:

Glastonbury’s magical Kidzfield is now open! Featuring free-to-ride fairground attractions, and a line-up that includes Basil Brush, Wind in the Willows, Flying Seagull Project and Andy and the Odd Socks.

Billy Bragg’s guitarist son Jack Valero shares images from last’s night’s impromptu double act with his dad at the Avalon1 Cafe stage, while confirming he will be there again tonight at 8 PM with his band.

Two generations one stage! Got to do an impromptu double act with Dad last night at the @Avalon1Cafe stage @FieldOfAvalon. Catch me there again tonight at 8pm with the band! @glastonbury @GlastoFestFeed pic.twitter.com/iWMdCOMVAP

Glastonbury organisers share a selection of photos from the first evening of Glastonbury 2022, available to view here.

A selection of photos from the first evening of Glastonbury 2022, you can see more of Wednesday’s great pics here: https://t.co/wn8SGuA0gV pic.twitter.com/R8WQVl18q7

A Glastonbury attendee has warned fellow Glasto-goers of burgles operating near Big Ground – saying: “Last night quite a few tents were burgled, especially at big ground campsite, they just put their hands into tents and grab stuff. the police think it was one person and that they won’t return as they’ve swept the whole area, but police will be patrolling more, so stay safe.”

⚠️last night quite a few tents were burgled, especially at big ground campsite, they just put their hands into tents and grab stuff. the police think it was one person and that they won’t return as they’ve swept the whole area, but police will be patrolling more, so stay safe. 💓

Doors to the Astrolabe Theatre open this evening at 7 PM, with performances to include Jonathan Pie,  Stuart Goldsmith, Box 9 Drumline and many more. 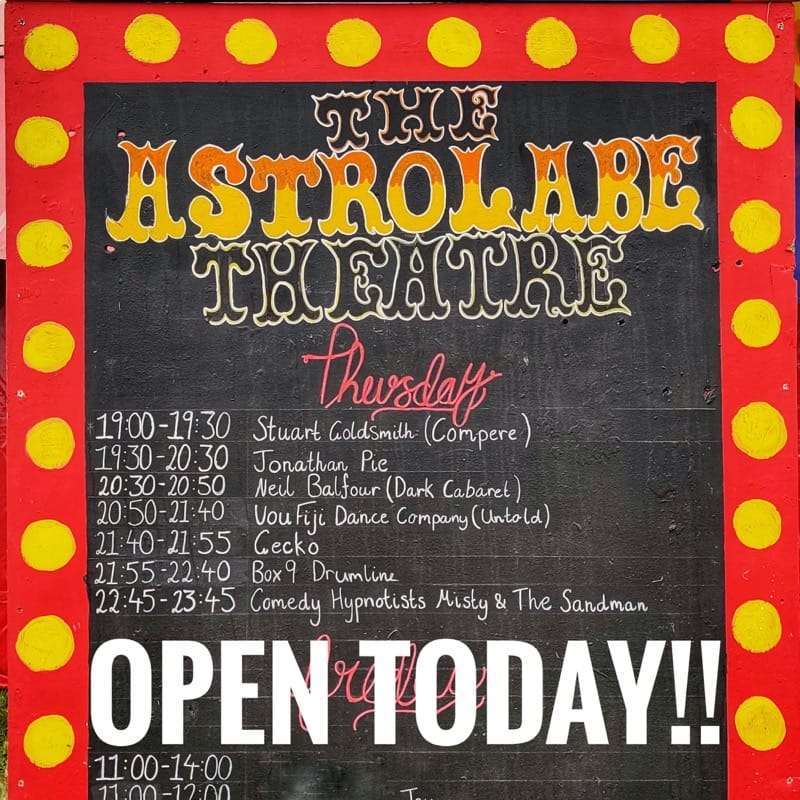 The BBC share beautiful views of the Festival site from above, in the video below.

Beautiful views of @glastonbury from above ☀️ pic.twitter.com/7D8KD7S0mb

Today’s Glastonbury Free Press (printed here on our vintage Heidelberg) is available for free on site now, or download at https://t.co/VHjhV3bzxJ

It features exclusive interviews with Emily Eavis, R.A.E. and Fatboy Slim and much more! pic.twitter.com/0B1Ap1zZQR

Despite today’s continued rail strike, a limited number of trains are heading to the festival from London Paddington.

Hi @JeremyVineOn5, I was on your bbc2 show on Monday about getting to Glastonbury saying we were just going to turn up at Paddington and hope. We were right! 9am London-Castle Cary is basically empty. pic.twitter.com/W6DOWouotZ

Waking up on his birthday at Glastonbury, one lucky fan received a Happy Birthday card from the main man himself, Glastonbury founder Michael Eavis, signed and everything!

Waking up on my birthday at #Glastonbury and open a card to see it’s signed by the main man. @emilyeavis please say thanks to your Dad from me. What a lovely gesture!

The four-piece rock band – who are due to play the Pyramid Stage at 4:45 PM tomorrow – currently appear to be stuck in LA after their flight was cancelled.

Fans who arrived last night are waking up to a mildly misty morning with plenty of sun.

After what was a very emotional start to the first day of the Festival yesterday, today, thousands more Glasto-goers are expected to arrive on site despite the continued rail strikes and a thunderstorm warnings from Met Office.

WEDNESDAY RECAP: Photos and highlights from the first day of Glastonbury 2022