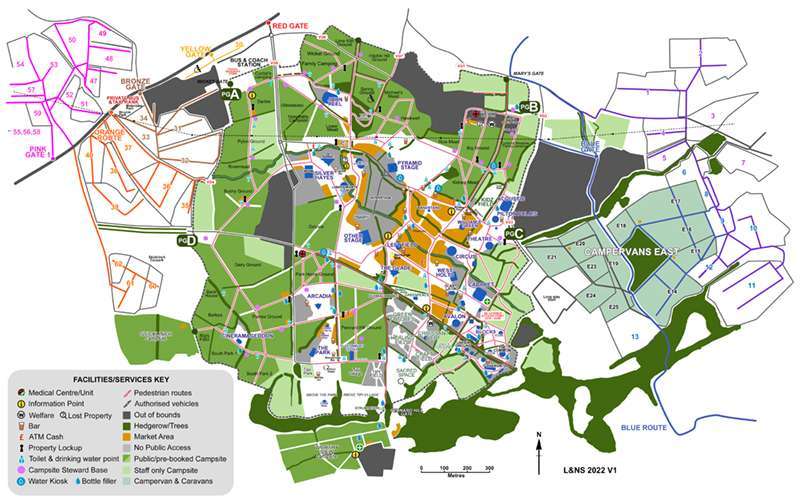 The Glastonbury 2022 map is finally here and it’s full of interesting improvements – some, more expected than others

UPDATE SECTION:
Version 3 of the Glastonbury 2022 map is now out with some minor corrective changes, while Version 2 omitted Camplight (which was most likely included in V1 by mistake) and added 3 new Water Bars/Bottle Filler points throughout the site.

Glastonbury officials have released the official site map ahead of this year’s anticipated festival.

The new map, which was revealed on the official Glastonbury website yesterday afternoon (Wednesday, 4th May), features a spray of changes and adjustments across the Worthy Farm site.

In addition to some expected tweaks like Campervans West being replaced with the new Sticklinch pre-erected campsite area, the return of Arcadia’s beloved Spider, and the introduction of The Lonely Hearts Club – which will be replacing the Blues Stage in Silver Hayes – the map also depicts some new and interesting improvements throughout the site.

Amongst the developments to be included in the 2022 map is the introduction of the new Totem venue – which is located in The Common area, and appears to be replacing the eco-friendly modular Samula that debuted at Glastonbury 2019.

Other changes include the BBC Introducing Stage being relocated eastwards of its original location, just a short distance out of the Silver Hayes area, and the omission of The Wormhole venue – which was originally introduced in 2019 and was located between The Park’s Bimble Inn and the Crow’s Nest in The Park area.

The Glade area has also moved a bit eastward of its original location, and The Beat Hotel – which publicly announced that 2019 was its final year at the Festival – has been replaced by new venue San Remo, created by the same team.

On the camping field front, some colour changes to the map suggest a portion of the Pylon Ground campsite has switched from public camping to staff camping.

The EE Recharge Tent – located right smack middle of the map, between Left Field and The Glade – indicates the mobile network’s partnership with Glastonbury will continue in 2022, and along with recharging services and enhanced coverage on-site, an update of the EE Glastonbury app can most likely be expected to take place in the coming weeks.

It’s worth noting that in previous years, the map went through a number of iterations between the time of its publication and the Festival taking place.

You can view the hi-res version of the map here, while an animated GIF showing the changes between the 2019 map and the first public version of the 2022 map, can be found here.

We also have a newly renovated and updated comprehensive Glasto camping guide which you can read, here.

Being a busy announcement week for the Festival, yesterday also saw Glastonbury reveal this year’s Shangri-La line-up poster under the title ‘We The People’, which was the seventh area to have its 2022 bill officially confirmed, with at least another ten still to come.

Last month, it had been confirmed that Arcadia’s iconic fire-breathing Spider will be returning to the Festival following planning issues with the Pangea crane, which had replaced the Spider in 2019. The news came on bundled with Arcadia’s line-up poster, which followed line-up posters for the Theatre & Circus Fields, Glasto Latino, former Dance Village Silver Hayes and Field of Avalon.

The Common reveals its line-up for Glastonbury 2022