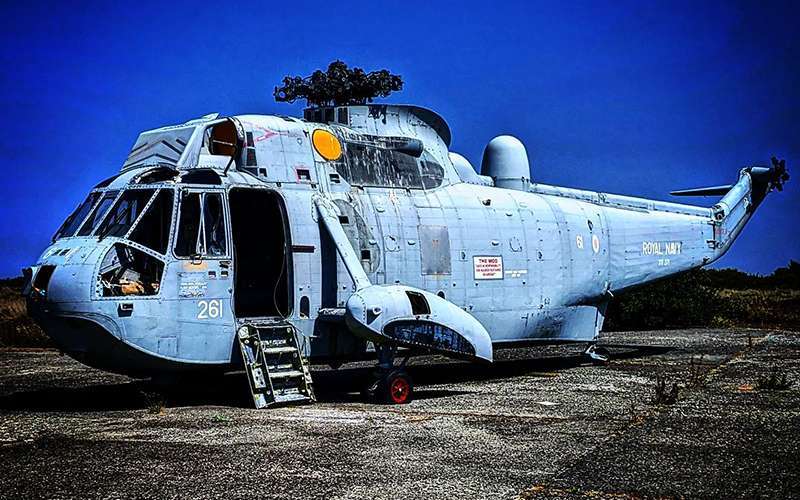 The message (seen below), shared via Arcadia’s Twitter, Facebook and Instagram pages, features a short 11-second clip of what appears to be an out-of-service Royal Navy helicopter being towed by a truck – accompanied by the caption “Got carried away on eBay”, alongside the hashtag #ArcadiaSepctacular.

Expressing anticipation for what might be a new addition to Glastonbury’s southwest-located dance area, one fan said: “Looking forward to seeing what the Arcadia family do with it” – to which Arcadia replied: “We’ve got some ideas…”

Taking a closer look at the unserviceable helicopter, which appears to be a Royal Navy Westland Sea King, one could speculate that the aircraft scraps were salvaged from the abandoned plane graveyard at Predannack Airfield in Cornwall.

According to Wikipedia – on 26 September 2018, the last remaining Sea King variant in Royal Navy service was retired, with most of the operators having been replaced, or are planning to replace, the Sea King with more modern helicopters, such as the NHIndustries NH90 and the AgustaWestland AW101.

Arcadia was founded by creative engineers Bert Cole and Pip Rush, both inspired by nature and driven to unite people for positive change.

Incubated at Glastonbury Festival, Arcadia self-proclaims to “draw on talent from across the arts, theatre and circus disciplines, supporting cultural celebrations and iconic music festivals around the globe.”

Arcadia’s iconic fire-breathing Spider returned to Worthy Farm for the most recent edition of the Festival in 2022, after it wasn’t seen on the site grounds since 2018, due to it being replaced with the Pangea crane in 2019.

After the Glastonbury 2019 ended, the plan to keep Pangea’s 20-meter crane base at the festival site year-round until 2023 was rejected by Mendip District Council and speculation had it that the cost of completely taking it down and rebuilding it each Festival-year was just too high for the Arcadia team’s budget.

The crane base, seen in the image below, was a steel structure, 20.4-meter tall, part of the approximately 50-meter tall crane in total, which was removed from the semi-permanent fixture prior to the 2022 Glastonbury Festival, in preparation for the installation of the returning Spider.

2022 saw one of the fastest Glastonbury clean-ups in the event’s history, with the first of the cows being spotted back in the fields on Monday, the 4th of July.

Campers started packing up their belongings and leaving the Festival site on a chilly Monday morning (27th June), as the Glastonbury clean-up litter picking army was already deep-dug down into work on returning Worthy Farm to its natural clean and rubbish-free status in preparation for the next edition of the Festival.

Some of the big-name acts to be rumoured for a possible performance at Glastonbury 2023 include the Spice Girls, Arctic Monkey, Elton John and most recently Roxy Music which are presumed to be a strong contender to play the coveted Sunday afternoon Teatime Legends Slot.