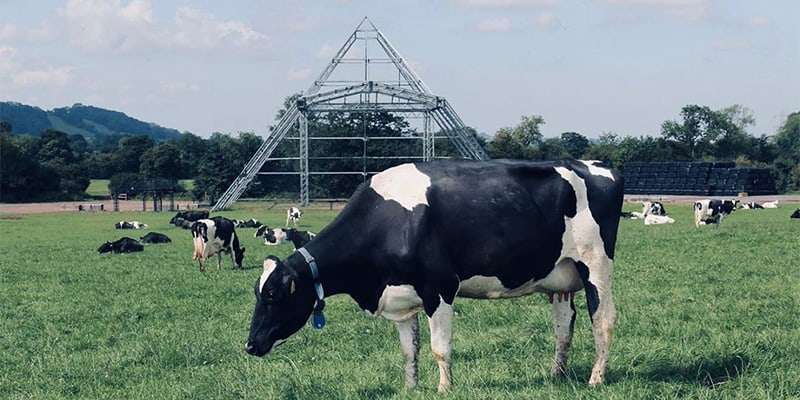 The Worthy Farm Reserve Cheddar cheese is here and the chance to win tickets to the next Glastonbury Festival.

Glastonbury Festival now has its very own cheddar cheese for the first time.

The Worthy Farm-held event has just launched the Worthy Farm Reserve Cheddar cheese which has been created using milk from the dairy herd that graze on the Festival site all year round, and is set to debut exclusively in Co-op stores across the UK later this month (Feburary 2021).

According to an official release, the cheese is a collaboration with Somerset’s Wyke Farms, known for having a cultivated, well-established reputation for sustainable farmhouse cheese making.

🚨 New Product Announcement 🚨 @coopuk has been working with @wykefarms & @glastonbury to create an exclusive new cheese, made using milk from the herd on Worthy Farm. Plus you have the opp to win tickets to the next festival with every pack purchased https://t.co/zfR8vSVTlB

Michael Eavis revealed the planned cheese back in May of last year [2020], during an interview with Ring O’Bells Radio’s Miles Leonard for #IsolationStation.

In the interview, concurring with the fact that he sees himself a farmer first and foremost, and then a festival organiser second – the award-winning dairy farmer was asked about the farm’s milk & cheese production, just to reveal that with the help from a couple of local farms the milk produced at Worthy Farm will be turned into “a festival cheese”.

there is now a Glastonbury cheese pic.twitter.com/TJTpo4RfBN

In 2019, Co-op was selected as Glastonbury Festival’s first-ever retail partner and established a bespoke, fully operational 6,000 square foot food store at the festival.

Glastonbury founder Michael Eavis said: “About 100 years ago, my grandfather decided to make the milk at Worthy Farm into Caerphilly cheese. Now, after 50 years of our recent festival history, our farm milk is being made into cheese once again by Wyke Farms and will be sold exclusively at Co-op stores across the UK.

“We’re thrilled that we can work together as a collective, with Co-op and Wyke Farms, to bring this tasty reserve cheddar to households across the UK.”

Joanne Wadsworth, Co-op cheese buyer, said: “Co-op is well-known for its support of British farmers and producers, plus our on-going relationship and shared values with the Glastonbury Festival makes our stores the perfect home for Worthy Farm Reserve Cheddar.”

Perhaps even more exciting than the cheese for some would-be Glasto-goers – a launch promotion will give Co-op members and customers the chance to win tickets to the festival when it returns next year.

Looking closer at the cheese wrapping, one eagle-eyed Glasto fan was quick to spot the sticker on the cheddar with the writing: “Win Tickets to Glastonbury” – which could perhaps mean an opportunity for one or more lucky individuals to win a golden ticket to Glastonbury 2022.