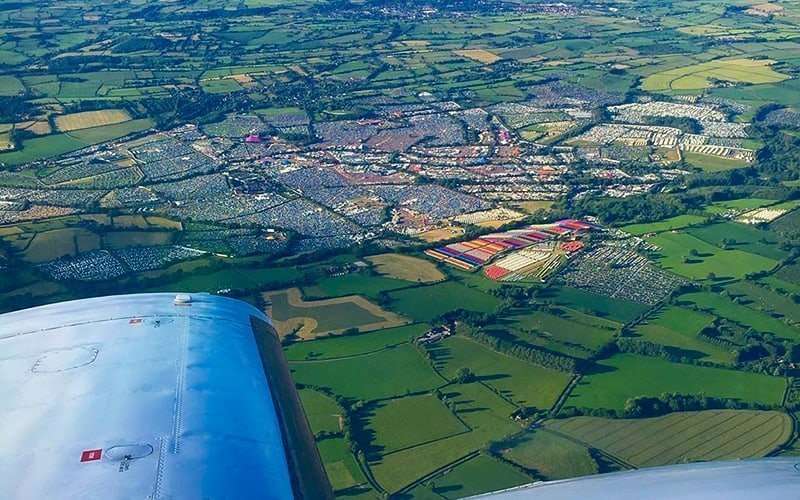 Glastonbury Festival could increase its crowd capacity for 2020 and onwards if expansion plans come to fruition.

As previously reported – The Worthy Farm-held event has been inquiring in regards to increasing the number of attendees since before the last edition of the Festival in 2019 (which at the time saw 203,000 people in attendance – including staff).

Although the Festival had already been given the green light to go ahead with the crowd expansion back in 2018, and already possesses the scope to increase its capacity, it has yet to be officially confirmed and is still unclear whether the number of attendees was or would actually be increased for Glastonbury 2020.

Now, plans are currently being reviewed for camping provisions at the massive Pilton site – as an amendment for both on and off-site camping options are being explored, with a public consultation set for the coming months – according to Somerset Live.

According to the recent reports, Mendip District Council spokesman has now said that local people will be able to give their views during a consultation period which will begin in the coming months.

The spokesman said: “Glastonbury Festival is currently reviewing plans for the camping provision both on and off-site, and also the potential to increase the overall attendance number at the festival in June 2020, in line with the licence allowance.

“In the New Year, the festival intends to hold various parish council and community meetings so that these forums are used as a mechanism for public consultation where any observations, issues or concerns can be addressed.”

The council spokesman added: “The festival is also aware that there is the potential for some misinformation about these plans to circulate in the communities around the site, so if any member of the public has any observations, issues or concerns regarding anything we would ask that they please contact the festival.”

In other words, if all goes as planned and it gets through the consultation, and they decide to go with it this year – that could mean 7,000 additional Coach Package Tickets up for grabs in the April resale.

In a Licensing Board meeting – held at Shepton Mallet’s Council Chamber (September 2018) – Glastonbury was given the go-ahead to increase its capacity to 210,000 by Mendip District Council.

A former councillor noted back then that the Glastonbury Festival license had been varied to increase the number of attendees by 3.4%, which would equate to a further 7,000 people.

Glastonbury’s current number of tickets available for public purchase stands at 135,000, which means adding the additional 7,000 tickets will see that number increase to a total of 142,000 public tickets.

This licence variation had been sought “in order to avoid an increase in the ticket price”, while allocating all the 7,000 extra tickets to Glasto-goers arriving via public transport.

Glastonbury’s current licence makes provision for 5,000 Sunday tickets sold exclusively to local residents, and 63,000 tickets for staff, volunteers, performers and traders – It runs until 2024, at which point the Festival will have to re-apply for a brand new licence.

On their website, MDC states that the council “has a good working relationship with the festival organisers and all of the partners involved in the running of the event, which is what helps to make it one of the best music festivals in the world”.

Back in 2017, Glastonbury founder Michael Eavis told the International Festival Forum (IFF) that he’s “not desperate to increase it [Glastonbury capacity]. There’s value in it being smaller and harder to get to – it makes it a bit more exclusive…”

Eavis is renowned for giving away the vast majority of the profits to charity, which means the move would not be about making more money – not for himself at least.

The award-winning dairy farmer stressed how his wonderful farm and loving family were enough rewards for him, though the rise in ticket sales could see more money going to the festival’s charity partners – adding that “If you’re well off enough to live like I do, with a wonderful farm, a wonderful family, that’s enough for me.”

Looking ahead to 2020 – Despite the fact that the full line-up for Glastonbury 2020 has yet to be released – all tickets for the Festival’s 50th anniversary have now sold out, with General Admission tickets selling out in 33 minutes, following Coach + Ticket Packages which sold out in just 27 minutes.