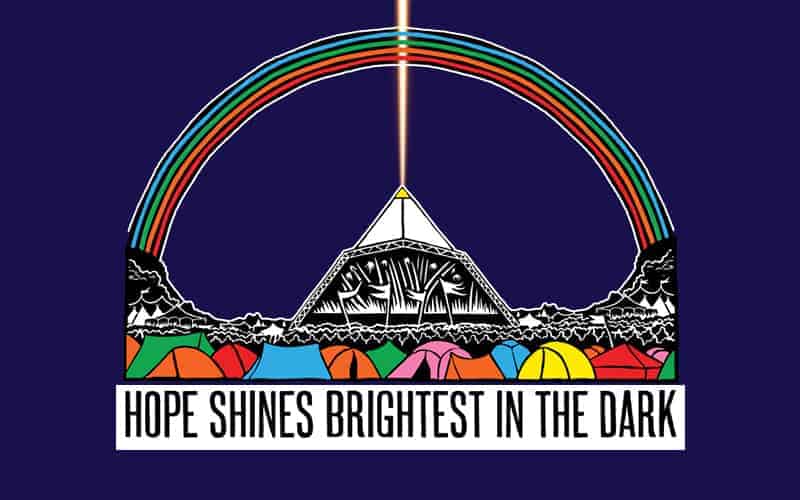 Glastonbury Festival has launched a new range of merchandise.

All the products are available to order now from the official Glastonbury shop, with profits going to the Festival’s three main charity partners, Oxfam, Greenpeace and WaterAid.

Not only are the Joint Charities partners of the Festival, they are also major financial beneficiaries from it – which means the cancellation of Glastonbury 2020 has left a significant gap in their funding.

The Glastonbury spokesperson said: “The designs feature the line “Hope Shines Brightest In The Dark”, which we’ve kindly been granted permission to use by Paul McCartney. That lyric features in McCartney’s appropriately-titled song, Hope For The Future. By purchasing from this range of ethically-sourced products, you really will be helping Oxfam, Greenpeace and WaterAid to build a more caring future for all.

“Now, more than ever, the Joint Charities need your help to make sure they can continue their vital work helping the world’s poorest people; improving access to clean water, hygiene and sanitation; and taking positive action against climate change.

“Thank you for supporting the Glastonbury Festival Joint Charities, so that they can continue their vital work.

The new merch was designed by legendary artist Stanley Donwood which has been working closely with the Festival for quite some time now on previous projects.

Last month, Glastonbury alongside the BBC had announced that the two will mark Glastonbury ‘s 50th anniversary this summer with a special showing of some of the Festival’s best performances and headliners to date – BBC Two, BBC Four and BBC iPlayer will be showing classic performances which took place at the legendary Worthy Farm-held event.