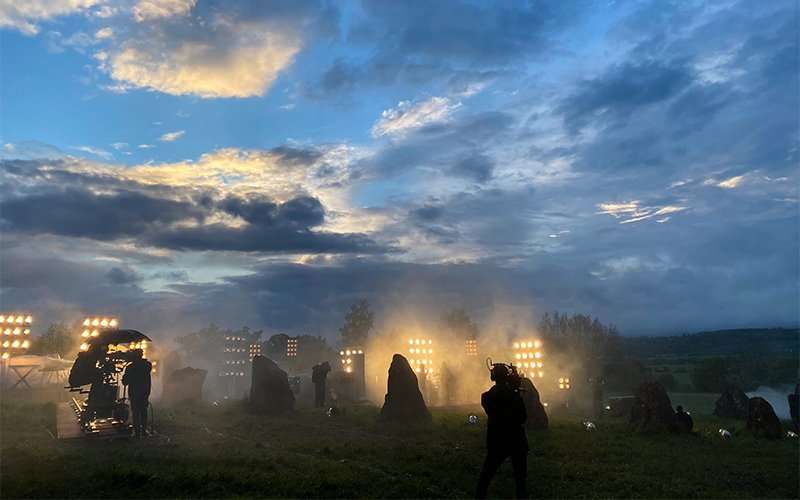 The Beeb reveals details of its upcoming ‘Glastonbury Experience 2021’ programming

A special director’s cut of Glastonbury Festival‘s Live At Worthy Farm global livestream – which premiered globally online and in cinemas across the UK on Saturday, May 22nd (with encore screenings on Sun, May 23rd) – is set to be broadcast on BBC television in the coming weeks.

The press release also reveals there will be another chance to catch highlights from the livestream across television, radio and online platforms between Friday 25 and Sunday 27 June, as a part of ‘The Glastonbury Experience 2021‘ — the BBC’s annual celebration of Glastonbury Festival.

Additionally, BBC Two will air a 60-minute behind-the-scenes documentary, presented by BBC Radio 2 presenter Jo Whiley, during The Glastonbury Experience 2021. The programme will feature the story behind the staging of Glastonbury’s first-ever festival without an audience, interviews with the artists, backstage footage and performance highlights from Live At Worthy Farm.

Lorna Clarke, Controller, Pop Music says: “Glastonbury is one of the jewels in our live music calendar so many thanks go to Emily and Nick for allowing us to broadcast highlights from Live At Worthy Farm.”

Emily Eavis says: “Since the BBC first broadcast footage from Worthy Farm in 1997, Glastonbury and the BBC have enjoyed a brilliant relationship, so I’m thrilled that they’ll be showing highlights of our Live At Worthy Farm special.”

Jo Whiley says: “It was fantastic to return to Glastonbury to catch up with old friends whilst watching some incredible live music – at last! I’m looking forward to showing viewers exactly what went on behind the scenes of Live At Worthy Farm.”

The concert to replace the Festival – which was forced to cancel for two years running due to the coronavirus pandemic – was due to start at 7pm on Saturday, May 22 with Wolf Alice followed by Michael Kiwanuka and George Ezra. Filmed across the Festival’s Worthy Farm site at landmarks including the Pyramid Field and the Stone Circle. This groundbreaking event, directed by the multiple Grammy-nominated Paul Dugdale, saw an impressive array of artists giving their time to perform in support of the Festival and associated charities, including Coldplay, Damon Albarn, Haim, Idles, Róisín Murphy, Jorja Smith, Kano, The Smile, plus DJ Honey Dijon.

The groundbreaking five-hour extravaganza was intertwined with a spoken-word narrative from artists including PJ Harvey, Jarvis Cocker, Kae Tempest, George The Poet, Kurupt FM, Little Amal and Michael Eavis, who guided festival-goers on a journey through the sacred valley in Somerset.

According to a statement from Live At Worthy Farm producer and promoter company Driift Live, some technical issues caused by “a third party” during the premier meant people who had paid £20 to see the virtual gig received an error, denying them entry while being presented with the “invalid code” or “access denied” error. The problems persisted for approximately two hours, after which organisers launched a free stream, meaning anyone could tune in, regardless of whether they had paid. That being said, the replacement stream could only be rewound by about an hour, meaning the early parts of the show were still unavailable.

Despite it not being her fault, Glastonbury organiser Emily Eavis issued countless apologies and said that the whole film would be made available for ticket holders to watch for a week from Sunday, adding: “I’m just so sorry to anyone who’s had issues.”

Ticket holders who could not access the show will also be offered a refund upon request, although looking back, once the technical issue was overcome Glastonbury indeed managed to deliver a phenomenal film and shine bright in the face of failure.

The BBC-commissioned documentary will be produced by Ryan Minchin and Executive Produced by Alison Howe at BBC Studios Music Productions, while the documentary and broadcast of highlights from Live At Worthy Farm is commissioned by Lorna Clarke, Controller, BBC Pop Music.

These Live At Worthy Farm highlights are part of The Glastonbury Experience 2021, a wider celebration of Glastonbury on the BBC in late June. Further television programming, which is commissioned by Jan Younghusband, Head of Commissioning, BBC Music TV, as well as programming across radio and digital platforms, will be announced next week.

Meanwhile, with no Glastonbury taking place on Worthy Farm for a second consecutive year in 2021, Michael and Emily Eavis are inviting campers, for one year only, to experience the farm in a way they’ve never been able to before – in Worthy Pastures – a family-friendly campsite at Worthy Farm which will take place later this summer.