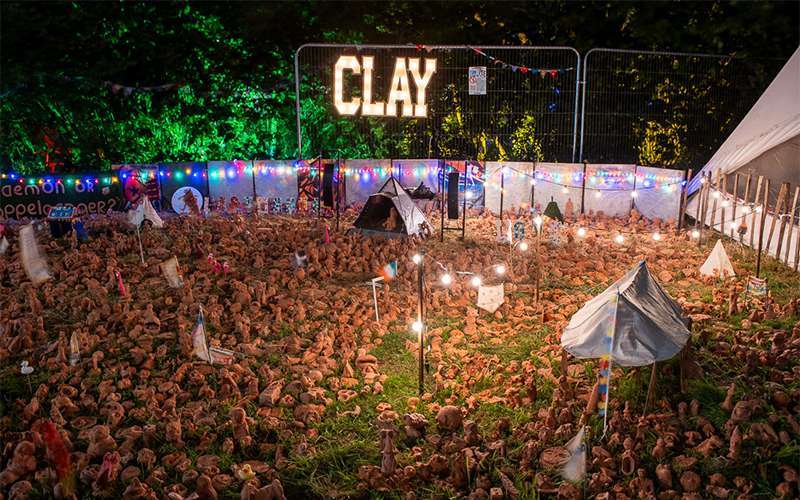 In a corner of the Theatre and Circus fields, an extraordinary community of clay self-portraits and a mini festival scene has been growing steadily thanks to the creativity of festival-goers over the past 20 years.

The “Daemon or Doppelganger?” project, which began in 2002, has resulted in an increasing population of thousands of faces, figures, and wonderful creatures populating the mini festival, which has its own Pyramid Stage, beer tent, long drops and flags, all made to scale.

I always think of the first 12 figures we started with made by fellow students on my Ceramics degree in Bath. As we put them outside our marquee while setting up in 2002, people came rushing over and said “Ooh, can I make one?”

Over that first weekend we used half a tonne of clay, such was the enthusiastic response, which completely astonished me!

As does the quality of the work produced. It’s lovely watching people work as they look blissfully happy!

You never know what is going to appear and that has kept the project interesting and exciting. So many people surprise themselves with what they can make. Clay is an endlessly responsive material and is wonderfully tactile.

These days it takes us three days to set up the mini festival with all the thousands of figures. The figures are stored on site from one year to the next, having been crated up on pallets and wrapped in clingfilm, they are forklifted to the storage yards – We haven’t seen them for three years now so are hoping all is OK!

The sight of the mini festival is extraordinary and many people spend a long time just taking it all in (as seen in the video below).

The photo from 2003 shows the figures made in 2002 once they had been fired. This was before the mini festival had been thought of. We fire as many as possible of the ones sturdy enough to survive transportation. We encourage people to take a photo of their work to preserve the memory.

The project began in 2002 at Glastonbury thanks to Arabella Churchill (One of the Glastonbury Festival founders and founder of the Theatre & Circus fields) who saw its potential. The idea came after our team ran a prayer flag workshop for the millennium where people could write their hopes and dreams for the new century.

Inspiration came from Antony Gormley’s “Field for the British Isles”, an installation of 40,000 terracotta figures. The difference is that his have been made to order, and ours are all unique creations reflecting everyone’s personal feelings of being in a festival atmosphere.

Since then we have visited festivals all over Europe with the workshops. Glastonbury is the only one to have a mini festival though!

The workshops are free, open to all (and if you want you can take your work home).