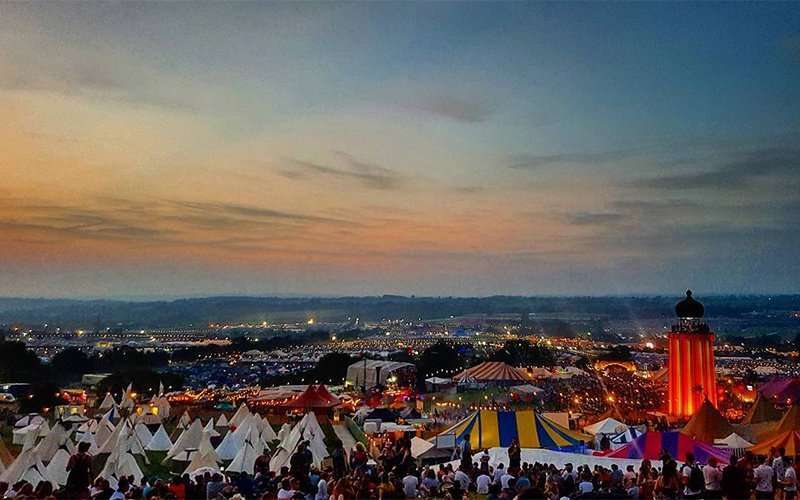 As with every Glastonbury-year, trying to keep up with all the latest Glastonbury related news and rumours can be somewhat overwhelming at times.

For this reason, we’ve put together an easily digestible timeline of sorts, consisting of bite-sized Glasto news bulletins for anyone who wishes to get up to speed and stay in the loop.

Feel free to bookmark this page to your favourites for easy access as we will be updating it regularly with new information as it makes itself available.

November 24, 2021 – Glastonbury granted Continuity Support from the Culture Recovery Fund: The legendary Festival is set to receive £600,000 from the government’s CRF.

November 11, 2021 – Emily Eavis says Guns N’ Roses need to play Glastonbury at some point: The statement came as an answer to a question Eavis was asked in a recent interview with Metal Hammer UK, which is celebrating four decades of Metallica in an all-star amassed special issue.

November 05, 2021 – Brass Against appear to confirm themselves for Glastonbury 2022: Announcing the remainder of their Spring/Summer 2022 European Tour dates earlier today (November 5) via a poster that was posted on the band’s social media channels – one eagle-eyed fan spotted an additional gig date at ‘Glastonbury’ that was not included in the poster announcement.

October 22, 2021 – Duran Duran up for playing Glastonbury if they get the “right slot”: Frontman Simon Le Bon says the band would love to play Glastonbury Festival – as long as they aren’t playing a “little acoustic tent”.

October 16, 2021 – Chris Martin says Coldplay won’t be performing at Glastonbury 2022: Speaking to NME, Martin explained: “Glastonbury is our spiritual home, but even your parents say you need to leave home sometimes.”

October 12, 2021 – Dave Gahan’s brother debunks Depeche Mode Glastonbury 2022 rumour: Not long after the rumour started spreading its wings, in came a Tweet from Philip Gahan – brother of Dave from the Depeche Mode – which debunked the roaring rumour, by saying: “No they won’t be doing Glasto”

October 07, 2021 – Candi Staton discusses the possibility of playing Glastonbury 2022: Speaking to NME, the American singer–songwriter said: “I was supposed to go back to Glastonbury two years ago and then COVID came and destroyed all that. They asked me again last year, but COVID was still around. Hopefully next year if all goes well, I’ll be back!”

October 04, 2021 – Billie Eilish announced as first headliner of Glastonbury 2022: Breaking the news via its official social channels this morning at 9:39AM (October 4), Glastonbury Festival said in the post: “We are very excited to confirm that Billie Eilish will headline the Pyramid Stage on the Friday night at Glastonbury 2022, to become the Festival’s youngest ever solo headliner. This will be her first UK festival headline performance.”

September 08, 2021 – Noel Gallagher confirms he will play Glastonbury 2022 if asked: While speaking to BBC Radio 2’s Jo Whiley (September 8), the ex-Oasis songwriter was asked whether he will be going on tour, to which he replied: “I don’t know, I mean… for my level of gigs which are theatres there’s not been anybody saying anything, but I had a plan anyway – by the end of 2019 was to take 2020 off, then 2021 was writing, 2022 was recording, then go back out in 2023 – so I’m still ahead of schedule.”

September 06, 2021 – Glastonbury submits plans for a new access to the Festival site: The new vehicular access will allow direct passage from one of the principal concrete trackways on Worthy Farm which is intended to serve a building that is being constructed on the site, in addition to also serving as access to staff parking during the event.

August 10, 2021 – Strong rumours suggest Billie Eilish is set to headline Glastonbury 2022, while Queens of the Stone Age are being positioned as Other Stage headliners: Whispers of a possible Glastonbury Festival performance start to circle the web (August 10), after eFestivals suggests the possibility of the American singer-songwriter taking to the Pyramid Stage next year [2022], adding that their source is telling them that Queens of the Stone Age will be headlining the Other stage on the same (Friday) night.

July 21, 2021 – Spice Girls Mel C says Victoria Beckham might rejoin for Glastonbury gig: Appearing on ITV’s Lorraine (July 21), the Sporty Spice said Posh Spice has admitted she might rejoin the Spice Girls if a slot is secured for when the Worthy Farm-held event finally returns next year [2022].

June 06, 2021 – Crowded House self-confirm for Glastonbury 2022: Appearing on Channel 4’s Sunday Brunch (June 6), Neil Finn revealed that the band was set for a performance at the now cancelled Glastonbury 2021 as part of the band’s 2021 tour while confirming that it has now all been moved into 2022 – saying: “We’ve had a tour booked for the last two summers, which is actually sold out and is now intact and coming next June [2022], we’ve transferred everything, including a Glastonbury appearance and some Roundhouse shows in London […] so yeah, we are coming, as soon as we possibly can, it’s taken 2 years once we get there…”

April 02, 2021 – Glastonbury among recipients offered award from latest Culture Recovery Fund grants: The Festival is awarded £900,000 from the government to help with the build of the Festival when it returns in 2022.

March 09, 2021 – Bill Harkin – designer of the very first Pyramid Stage – dies at the age of 83: In an official statement released by Michael Eavis, he said: “Bill Harkin first came to Glastonbury towards the end of 1970. He was delivering products to the health shops in the town and decided to walk up the Tor where he met Andrew Kerr. They both became aware of very powerful feelings of spirituality and agreed the need for a new age of looking at life towards a utopian society. After more intense discussions these conversations led to the idea of a large music festival with a Pyramid as centre stage. That’s when they came to me for a suitable site!

February 22, 2021 – Aerosmith lists and then omits “Glastonbury, UK” as a tour date for their 2022 schedule: After earlier reports of the US rock stars appearing to self-confirm for Glastonbury 2022 by initially including the Festival in their tour schedule, the US rockers then went on to updated their tour dates page on their official website, yet again, now omitting the “Glastonbury Festival, UK” listings which was previously scheduled for June 25.

February 17, 2021 – The Festival gives fans the chance of winning tickets to Glastonbury 2022: As part of the anticipated launch of its new Worthy Farm Reserve Cheddar – the legendary festival is reportedly giving away 23 pairs of tickets to next year’s event.

February 10, 2021 – Glastonbury Festival lunches its very own Worthy Farm cheddar cheese: The Worthy Farm-held event lunches the Worthy Farm Reserve Cheddar cheese which has been created using milk from the dairy herd that graze on the Festival site all year round and is set to debut exclusively in Co-op stores across the UK (Feburary 2021).

February 08, 2021 – Glastonbury charity predicts £15,000 loss due to Festival’s two-year cancellation: Education charity SOS Africa said that the cancellation of the 2020 and 2021 festivals could cost the organisation as much as £15,000 in fundraising, but founder Dr Matt Crowcombe said the decision was “completely understandable”.

February 01, 2021 – Dave Grohl discusses Glastonbury’s return in a post-pandemic era: The Foo Fighters frontman told The Telegraph’s Neil McCormick: “Unfortunately, you have to take that into consideration, no matter how much everyone wants to kick down the front door and run to the nearest rock concert, there are some things that are beyond our control. It’s heartbreaking. But of course, it’s not the last Glastonbury! I don’t think a pandemic can stop Glastonbury! It might hold it back a little while, but sh–!… I want my kids to see bands at Glastonbury, whenever that show happens again, and it will.”

January 31, 2021 – Road leading to Glastonbury Festival to undergo significant “improvement”: Following continued delays, the Department for Transport approve the scheme to dual the single-carriageway stretch of the A303 between the Podimore roundabout near Ilchester and the Sparkford roundabout, where the road meets the A359.

January 27, 2021 – Glastonbury’s The Common confirms plans for “something digital over the June [2021] weekend”: Posting the message to their official Facebook page, The Common said: “Nooooooooooo… Glastonbury 21 is more covid collateral damage… Gutted is an understatement… will miss raving with all our Common family… but we’ll be planning something digital over the June weekend, and will be even more hyped for next year… one thing is for sure- 2022 will be one hell of a party”.

For more information, you can view a FAQs summary of everything you need to know in regards to Glastonbury 2022 tickets, dates, line-up and rumours thus far, by clicking here.

The Glastonbury 2022 clean-up has begun