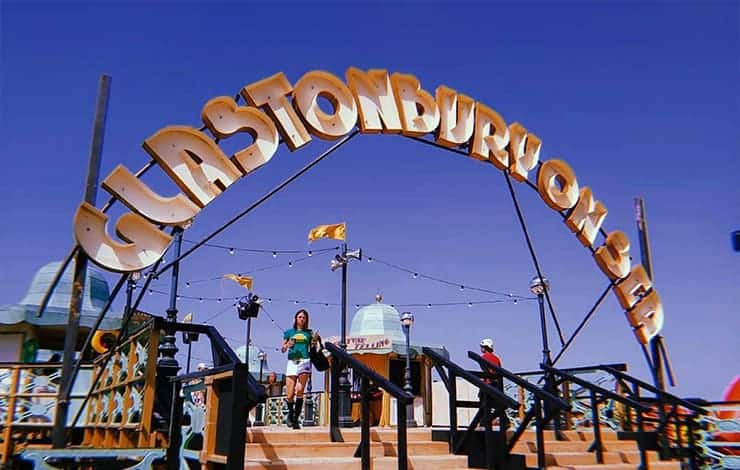 “Anarchism, mutations and wild behaviour” can be expected…

Glastonbury-On-Sea has now officially confirmed its return to Glastonbury while looking ahead to 2020.

Updating its “Area Page” on the Glastonbury Festival website – the tent-side area has said: “We are delighted to return for the 50th Anniversary Festival following our debut last year” – In addition to also sharing new artwork and a trailer consisting of some of the best moments from its debut at Glastonbury 2019.

The 60-meter-long “Victorian” pier, AKA Glastonbury-on-Sea, was designed by long-time Glastonbury creative partner and visionary, Joe Rush, who based the design on Llandudno pier in North Wales.

The almost two-minute-long trailer features Rush saying that the idea for The Pier came about in a conversation with his girlfriend, while he was telling her about his childhood in Hastings and his dad who was a portrait sketcher on the beach (see video below).

In what could be an indication of things to come, Glastonbury-On-Sea’s statement also states that “During the holidays the bill topping Robots in the Pavilion have taken over and demanded that the Pier be filled with even more anarchism, mutations and wild behaviour.”

Last year Glastonbury founder Michael Eavis had revealed that Glastonbury-on-sea will be returning for the festival’s 50th-anniversary in 2020, while sharing new details about the planned improvements to the attraction in the form of a sea of pre-pitched tents.

Replacing the need for Glasto-goers to bring their own tent, they will now be able to rent one of the pre-pitched tents surrounding the pier prior to the event, which apart from being very convenient, will also further help reduce campsite waste.

Keeping with the seaside theme, the tents will be represented in the colours of blue and white, with the artistic aim of making them appear to be an ocean around Glastonbury-on-sea’s Victorian pier when seen from a distance.

Only around 100 of these pre-pitched blue and white tents will be available to the public, they will be joining a range of other pre-pitched options available at the Festival, including the Tipi Village, Worthy View and the recently announced Sticklinch.