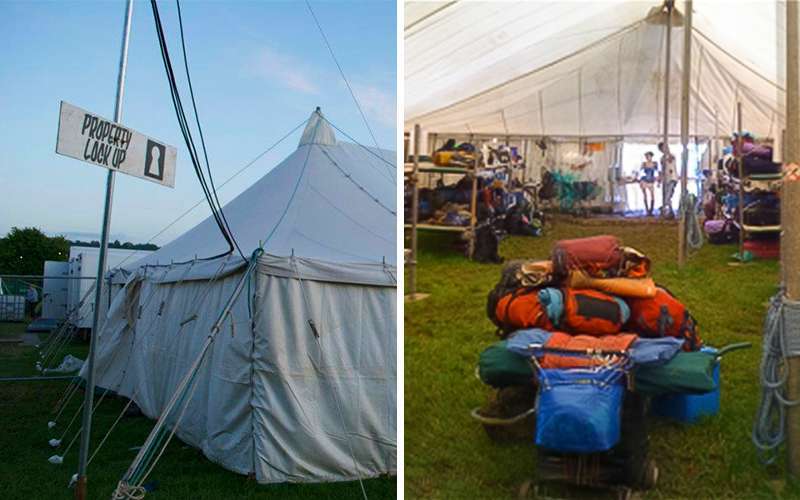 The Property Lock-ups at Glastonbury Festival are one of those seemingly underrated things in life that once utilised, you ask yourself how you ever managed without them.

They can be used for storing (almost) anything and everything – People leave a wide variety of weird and wonderful things in the lock-ups; from small items such as cash, keys and a spare phone to larger things like a fully loaded trolley and bicycles.

The Property Lock-ups are open 24 hours a day, are free of charge to use, and as well as looking after your belongings, they also distribute toilet rolls for FREE – though donations are gratefully received, which are then used to fund CND and various other peace campaigns.

The Property Lock-ups have been run at Glastonbury since 1992. There are about 14 on site and each lock-up handles about 30,000 items every year.

The Lock-ups are run by volunteers from Campaign for Nuclear Disarmament groups, Birmingham Friends of the Earth and Brighton Peace and Environment Centre – so in using the Property Lock-ups, you also support these groups campaigning for a more sustainable, peaceful society.

Lock-ups are secure marquees where you can store belongings – they have fencing running around the inside, are lit at night and have at least 3 staff at all times.

They operate on a similar basis to a cloakroom – you hand over your item(s), give them a few details and get a ticket in exchange, when you bring back the ticket, you get your item(s) back. There’s a bit more detail to it – but that’s the basic principle.

As good practice, it’s a good idea to take a picture of your ticket receipt as a backup precaution (just in case it goes missing).

Large items such as rucksacks or musical instruments are stored on shelves made from scaffolding (all those bags get heavy so it needs to be as sturdy as possible) while smaller items such as mobile phones are stored in their own area in the lock-up so they can’t get lost in amongst the bigger stuff.

On the other hand, documents such as passports, travel tickets, ID and cash are placed in envelopes, sealed in the owners’ presence and stored in their own area – they don’t get opened until the owner claims them back.

What can be left there?

Pretty much anything that you’ve brought with you, bags, rucksacks, cameras, phones, instruments… You name it, they’ll store it!

Why use a Lock-up?

It’s the safest place to store anything of value to you. It’s not just for expensive belongings (Phones, cameras, etc), but for items like car keys, train tickets, or personal medicines, which if they get lost will cause you huge problems.

How safe are they?

The property lock-ups are the safest place on site to store belongings. No one apart from staff members are allowed inside the lock-ups; festival-goers are not allowed to come in for any reason. They are staffed 24 hours a day, are well-lit at night and have direct communications with on-site security/police.

When are they open?

The lock-ups are open 24 hours a day from 8 AM on the Wednesday as the festival opens, and remain open until 12 noon on the Monday. Anything unclaimed after noon on Monday is (gradually!) transferred to Lost Property at Festival Wagonshed Welfare, who will hold it until it is claimed (and may not be available until after 4 PM).

Getting items back after the lock-ups close can take a long time, so it is recommended you do your best to get up nice and early on the Monday morning to make sure you get your stuff back!

Where are they located?

The locations are marked on the Festival map (seen below), and at the entrances to the Lock-ups, by a black ‘keyhole’ logo.

Can I trust the staff?

Yes! All the lock-up staff are volunteers who do the job for three reasons: as a way to see some of the festival, the enjoyment of the job (honestly!), and to raise funds for their groups.

What if I lose my ticket?

Don’t panic! If you do manage to lose your ticket, there are procedures in place so that belongings can be reunited with their owners – this does take a bit of time so try not to lose it!

If someone finds a lost ticket and tries to claim your item, don’t worry, they won’t be able to get it. Only the person who checked an item in can reclaim it.

Is it really free?

Yes! The service is provided by Glastonbury Festival for the benefit of its festival-goers.

This basically means that if you look under 21, you will not be served alcohol unless you can prove you are over 18 – by presenting ID, or by wearing a ‘Challenge 21’ wristband.

These will be available from the property lock-ups, on presentation of a valid form of photo ID. The following are acceptable forms of ID:

The video below (produced by DorianPVP and shot by Ben Leete) provides information about the Property Lock-ups at Glastonbury and an insight into the people and the process.

Glastonbury packing list: What to bring and what NOT