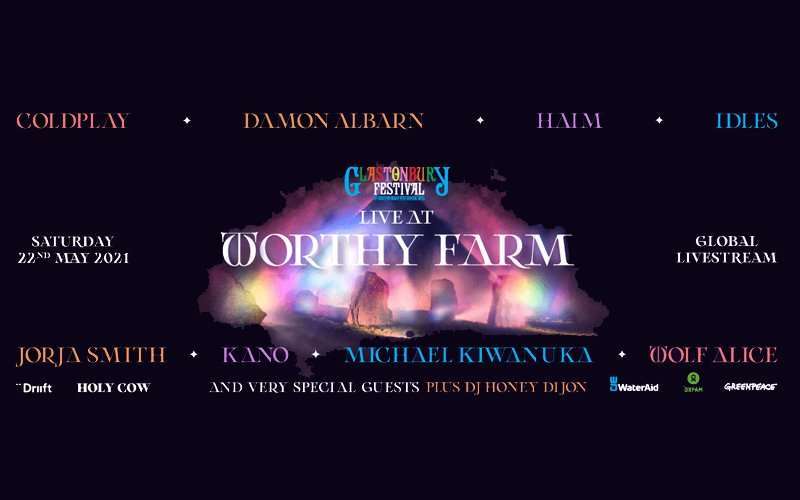 Music fans will be able to watch livestreamed sets from the Glastonbury Festival site in UK cinemas later this month.

The ‘Live At Worthy Farm‘ livestream event is set to feature performances by Coldplay, Damon Albarn, HAIM, Wolf Alice and more on the weekend of May 22 and May 23 in place of the event, which was cancelled for the second consecutive year due to the coronavirus crisis.

The #LiveAtWorthyFarm global livestream is also coming to UK cinemas on Saturday, 22 May!

Experience this unique and unmissable celebration on the big screen with surround sound, and support your local cinema.

Other acts playing Glastonbury’s ‘Live From Worthy Farm’ event include Idles, Jorja Smith, Kano and Michael Kiwanuka – in addition to some “very special guests” – which promises “a five-hour journey through an evening at Worthy Farm,” adding that “it’s going to be like the festival, but without the people”. The acts will be interspersed with a spoken word narrative that takes viewers on a journey through the valley where the festival takes place.

Trafalgar Releasing CEO Marc Allenby said: “As a national moment with some of the biggest acts in music, we are excited to be part of this unmissable celebration, allowing audiences to experience the event on the big screen and support their local cinemas,”

The event will financially support Glastonbury Festival’s three main charity partners – Oxfam, Greenpeace and WaterAid – as well as helping to secure the return of the physical festival for 2022.

The release will land in UK cinemas on the first weekend after the majority of the UK’s cinemas will reopen from May 17 in line with the government’s proposed roadmap out of lockdown.

Tickets for ‘Live At Worthy Farm’ on sale Wednesday, 12 May. Click here for more info.

Meanwhile, plans for a one year only family-friendly campsite at Worthy Farm – known as Worthy Pastures – have recently been confirmed by Glastonbury’s organisers, saying: “With no Festival taking place on Worthy Farm for a second consecutive year in 2021, Michael and Emily Eavis are pleased to invite campers, for one year only, to experience the farm in a way you’ve never been able to before”.