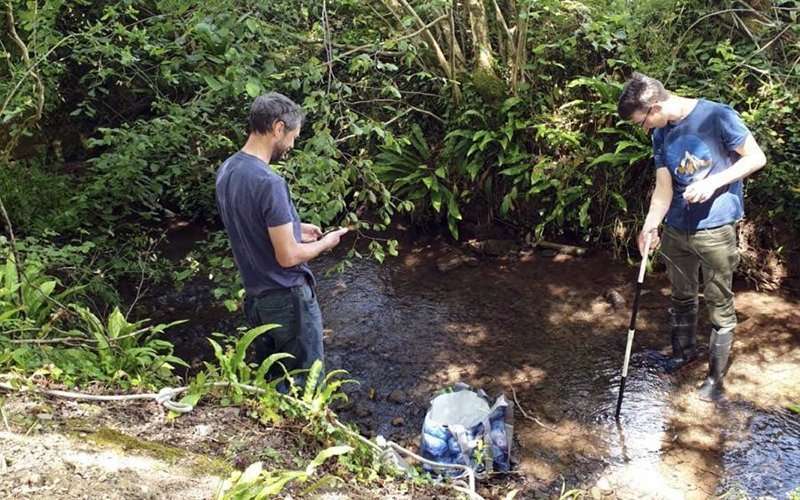 The team discovered that levels of MDMA and cocaine in the water during the festival were so high it could be harming wildlife further downstream, including rare populations of eels.

Led by Bangor University’s Dr Christian Dunn the scientists are now urging festival-goers of all “greenfield festivals” to use the official toilets provided by organisers as it is believed the drugs can enter nearby rivers through public urination.

Dan Aberg, a Masters student in the School of Natural Sciences worked with Dr Daniel Chaplin from the Centre for Environmental Biotechnology (CEB) to measure levels of illicit drugs before, during and after the Glastonbury Festival when it was last held in 2019.

It was found that MDMA concentrations quadrupled the week after the festival, suggesting long-term release from the site and cocaine concentrations rose to levels known to affect the lifecycle of European eels, a protected species.

Mr Aberg said: “Illicit drug contamination from public urination happens at every music festival. “The level of release is unknown, but festivals undoubtedly are an annual source of illicit drug release.”

“Unfortunately, Glastonbury Festival’s close proximity to a river results in any drugs released by festival attendees having little time to degrade in the soil before entering the fragile freshwater ecosystem,” he added.

The scientists propose to minimise the release and impact of illicit drugs from festivals, research into possible treatment via environmentally friendly methods, such as constructed treatment wetlands (CTWs) should be conducted.

In addition, information on the harmful effects of public urination should continue to be provided to festival attendees to reduce the contamination of natural resources.

Explaining the significance of their results, Dr Christian Dunn, said: “Our main concern is the environmental impact. This study identifies that drugs are being released at levels high enough to disrupt the lifecycle of the European eel, potentially derailing conservation efforts to protect this endangered species.

“Education is essential for environmental issues, just as people have been made aware of the problems of plastic pollution, and Glastonbury have made great efforts to become plastic-free; we also need to raise awareness around drug and pharmaceutical waste – they are hidden yet potentially devastating pollutants.”

A spokesperson for the Glastonbury Festival said: “Protecting our local streams and wildlife is of paramount importance to us at Glastonbury Festival and we have a thorough and successful waterways sampling regime in place during each festival, as agreed with the Environment Agency.

“There were no concerns raised by the Environment Agency following Glastonbury 2019. We are aware that the biggest threat to our waterways – and the wildlife for which they provide a habitat – comes from festival-goers urinating on the land.

“This is something we have worked hard to reduce in recent years through a number of campaigns, with measurable success.

“Peeing on the land is something we will continue to strongly discourage at future festivals. We also do not condone the use of illegal drugs at Glastonbury.

“We are keen to see full details of this new research, and would be very happy to work with the researchers to understand their results and recommendations.”

The study published in Science Direct can be found here.