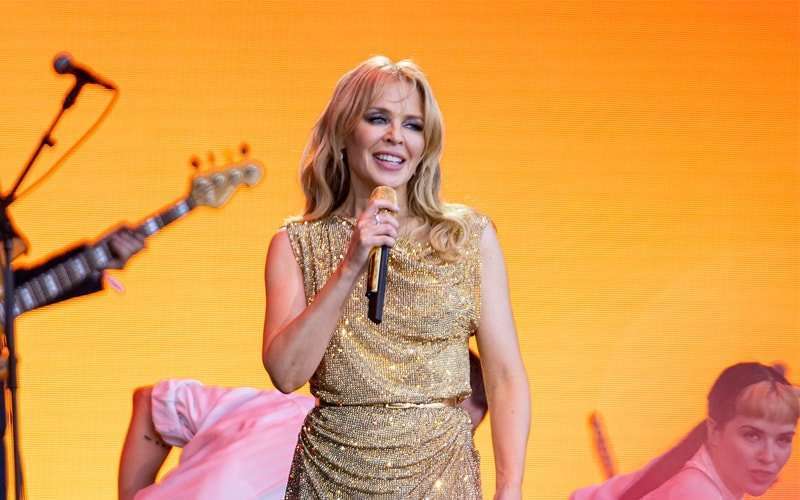 An average consolidated audience of 3.2m people tuned in to the BBC One programme to see Kylie Minogue play Glastonbury’s tea-time “legends slot” at this year’s festival. Viewership peaked at 3.9m during the closing minutes of Kylie’s set, as she played Dancing and Spinning Around.

Kylie’s emotional performance came 14 years after the 50-year-old superstar was set to headline the iconic festival and take to the Pyramid Stage on the Sunday night back in 2005, but had to cancel her performance so she could undergo treatment for breast cancer.

The BBC announced that its coverage of Glastonbury 2019 had set new records, beating previous highs set by Adele which was watched by 2m people, rising to 3.7m during her set, and Ed Sheeran, whose headline slot on BBC Two attracted an average audience of 3.1m in 2017.

According to an official press release, the 2019 coverage also saw a record digital performance for the BBC in general, with the total number of online requests, including YouTube views and live webcasts, totalling 37.5 million – an increase of 86% on the BBC’s coverage in 2017. On Twitter, footage of Dave inviting Alex Mann (aka Alex from Glasto) from the audience to join him on stage saw 23m global views.

Glastonbury 2019 saw BBC Music present the best of the festival across TV, radio, BBC iPlayer and online. Over 100 performances were available from across the main stages of the festival on BBC iPlayer, and for the first time ever, BBC Sounds was set as the ultimate destination for audio from the festival this year, as listeners were able to access all broadcasts on BBC Radio Glastonbury, at the touch of a single button.

James Stirling, head of BBC Music and BBC Music Introducing said: “This year we wanted audiences to be able to watch and listen to the best of Glastonbury wherever and whenever they wanted via the BBC iPlayer and BBC Sounds. I’m delighted that once again the BBC’s extensive coverage of Glastonbury has been so well received – with our digital content hitting record numbers and BBC One bringing Kylie’s performance to the biggest audience a Glastonbury programme has seen to date.”

Stormzy’s set on Friday night and The Killers on Saturday saw both BBC Two programmes achieve an average audience of 1.1m and 1.6m respectively – which according to the BBC are both figures were well above their slot average.

The Killers performance achieved the highest average audience for a Glastonbury programme on BBC Two this year, with The Cure’s set on the same channel coming in second with an average audience of 1.2 million – nearly twice the slot average.

On BBC Four, the programme featuring performances from Billie Eilish and The Good, The Bad & The Queen pulled in the largest audience for the channel at 460,000.

With audiences increasingly choosing to catch up with performances online, Glastonbury 2019 saw the total number of online requests (which include views from YouTube, iPlayer requests and live streams) reached 37.5m – an increase of 86% from 2017.

That being said, TV viewership was down – from 23m in 2017 to 21.1m this year; although that figure is still the second-highest on record.