UPDATE SECTION:
Since the posting of this article, See Tickets have issued the following statement: “We’re aware that a small number of Glastonbury resale customers have received their confirmation emails without the tickets showing in their order. We have the details of all these customers and we will be in touch to rectify the issue.”

Glastonbury Festival released its second batch of resale tickets this morning (Sunday, 27 March) and saw them all sell out in just 22 minutes!

General Admission tickets went up for resale at 9am (BST) and were all gone by 9:22am.

At 9:22am, See Tickets confirmed that tickets for Glastonbury 2022 have sold out, adding: “Congratulations to everyone who got tickets for this morning. Confirmation emails are going out now. Sorry to those who missed out.”

Glastonbury Festival officials took to social media shortly after at 9:23am to confirm the news, saying: “The tickets in this morning’s resale have now all been sold. Our thanks to everyone who bought one, and sorry to those who missed out.”

Glastonbury organiser Emily Eavis said: “Thanks so much to all who managed to buy tickets this morning, and sorry to everyone who missed out, but the volume of people trying to buy them was incredibly high. We can’t wait to bring the Festival back and welcome you here in June!” 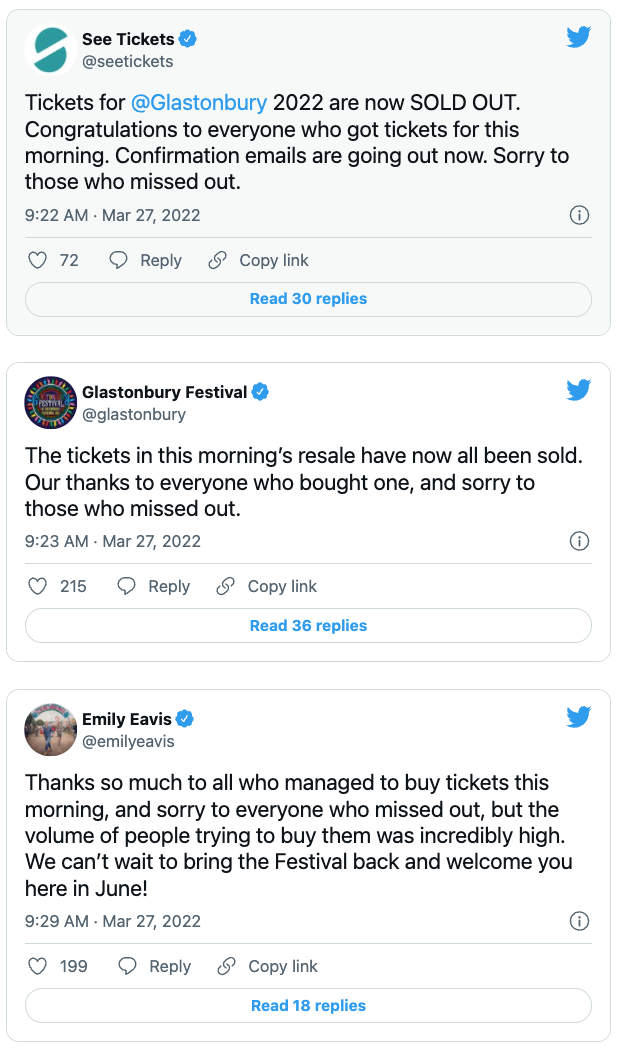 In another resale that took place last week, Glastonbury saw all of its remaining Coach + Ticket Packages sell out in just 18 minutes.

Some of the opportunities include entering competitions, working at the Festival, volunteering.

That said, there will be a resale of any Campervan, Tipi, Sticklinch and Worthy View cancellations at 11am today (Sunday, 27 March) via glastonbury.seetickets.com