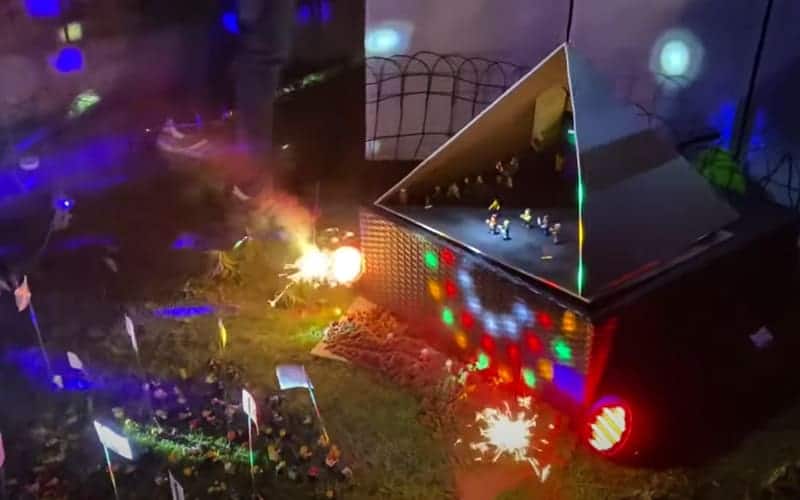 Following Glastonbury 2020‘s cancellation due to the COVID-19 pandemic – A man took his disappointment and turned it into art.

Set to attend his third Glastonbury this June, Adam Hardman decided to recreate a LEGO model of the legendary festival in his backyard.

After enlisting the help of housemate Jonathan Oakes, the pair headed to their back garden in Warrington, England to mock up the event using thousands of tiny LEGO blocks – with their end result becoming a viral sensation.

Viewed by more than three million people online – The nearly-half-hour video of the recreated LEGO Glastonbury showcases a fenced-in area in Hardman’s backyard filled with little block fans holding flags and gathered around a cardboard diorama of the Festival’s iconic Pyramid Stage, which is also filled with LEGO performers.

Featuring an array of lights scattered around the “stage”, a smoke machine, pyrotechnics, and even security guards in the pit between the stage and the crowd, the LEGO Glastonbury is pretty accurate. Meanwhile, an iPad behind the performers onstage plays clips from past Glastonbury shows from The Chemical Brothers, Dolly Parton, The Killers, Arctic Monkeys, Coldplay, and more (watch the video below).

Speaking to the Warrington Guardian, Adam said: “I can’t even open the Facebook app on my phone at the minute because of how many notifications I’m getting, it’s bonkers.

“Some of the comments and messages that have been coming in are amazing. One woman said she was ready to throw the towel in, and this had turned her around.

Doing their best to help combat the COVID-19 crisis – the Festival, headed by Michael and Emily Eavis, donated cotton tote bags to hospitals in need, while also giving away thousands of litres of hand sanitiser, gloves and face masks meant for Glastonbury 2020 to frontline emergency services – including Avon and Somerset Police and NHS staff. The Festival also gave away several thousand ponchos which have been repurposed as anti-coronavirus PPE.

Glastonbury 2020 was set to be held at Worthy Farm in Pilton, Somerset – from Wednesday, June 24 through Sunday, June 28 – In a message from organisers, announcing Glastonbury 2020’s cancellation, Michael and Emily Eavis explained that cancelling this year’s event was their “only viable option” following “new government measures announced this week” to prevent the spread of the pandemic – saying: “We’re so sorry that this decision has been made. It was not through choice. But we look forward to welcoming you back to these fields next year and until then, we send our love and support to all of you.”