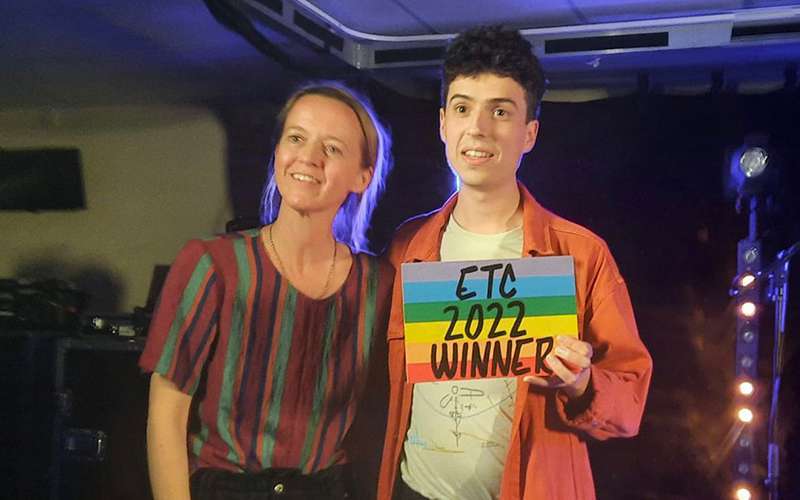 The up and coming artist wins a slot on one of the main stages at this year’s Festival, plus a £5,000 prize

Lewis McLaughlin has been announced as the winner of the 2022 Glastonbury Emerging Talent Competition.

The competition finals, which took place this evening (Saturday, 30th April) in Pilton, Somerset saw the 7 shortlisted acts, which were handpicked from thousands of other entrants, battle it out for the grand prize.

Announcing the news of the winner on social media, Glastonbury Festival said: “And our 2022 Emerging Talent Competition winner is the amazing Lewis McLaughlin! He wins a £5,000 Talent Development prize from the PRS Foundation and a slot on one of the main stages at this year’s Festival!”

As mentioned in the tweet, in addition to bagging a slot at this year’s Glastonbury Festival, McLaughlin has also been awarded a £5,000 Talent Development prize from PRS Foundation.

Runners-up Crae Wolf and English Teacher have likewise been awarded a performance slot at this year’s Festival, in addition to a £2,500 PRS Foundation Talent Development prize.

In light of Smoothboi Ezra (who was supposed to be one of the finalists this evening) not being able to play at tonight’s ETC live finals due to illness, Glastonbury has decided to let them perform at the 2023 finals instead.

While the judges – who included Emily Eavis, Glastonbury stage bookers and music business professionals – were making the decision about tonight’s winner, R.A.E, winner of the 2020 Emerging Talent Competition (during lockdown), broke out in a performance for the audience.

The Hip-hop and R&B artist who was scheduled to play the 2021 edition of the festival after winning the ETC in 2020 – before it was forced to cancel due to the coronavirus pandemic – will also play the 2022 event when it finally returns this June. AJIMAL and Matilda Mann were named runners-up of that year’s competition.

PRS for Music later tweeted a message confirming that in a surprising turn of events, Glastonbury organiser Emily Eavis announced that all of tonight’s performers – which included Amahla, Crae Wolf, English Teacher, Lewis McLaughlin, Nia Wyn, SOFY and Zola Courtney – will be invited to play at this year’s Festival.

After an incredible night of live music and talent, @emilyeavis just announced that all of tonight’s performers will be invited to play at @glastonbury 2022 #ETC2022 pic.twitter.com/qUF1TJvObp

Some of the recent ETC competition winners include Hastings, East Sussex’s Marie White – who won in 2019; Soul singer Josh Barry who won the 2017 ETC edition and has since toured with Rag’n’Bone Man and Gorgon City; R&B singer Izzy Bizu (a 2016 BRITs Critics’ Choice nominee and winner of the 2016 BBC Music Introducing Award); and singer-songwriter Declan McKenna, who won ETC 2015 and has subsequently signed with Columbia and been longlisted in the BBC’s Sound Of 2017 poll.

Meanwhile, Field of Avalon, Silver Hayes, Glasto Latino, Theatre & Circus Fields and most recently Arcadia are five of the areas to have revealed their line-up posters ahead of this year’s event – following Glastonbury’s first main line-up announcement poster revelation, shown below, which dropped in March of this year.