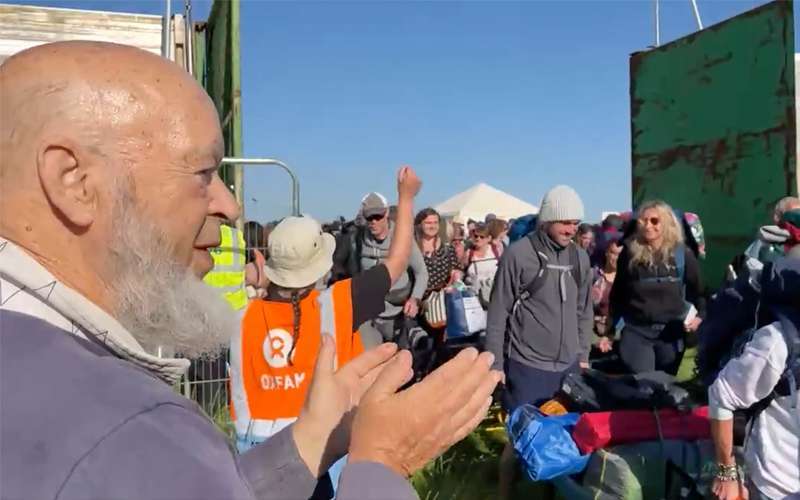 Glastonbury Festival is back!

After two long years of absence, the gates to Glastonbury Festival have finally opened, today.

Below, you’ll find an updating feed of some key happenings throughout the Festival site, including photos, videos, info and general updates – giving you a taster of what’s going on at Glastonbury 2022.

SecertGlasto with the heads up on a secret Billy Bragg set at 18:00 in the Avalon Cafe.

We have had numerous reports that Billy Bragg will be performing a secret set today at 18:00 in the Avalon cafe.

#Glastonbury2022 much sympathy to the poor people who had just spent five hours queuing in the blazing heat, finally found a spot to pitch their tent and then THIS happened pic.twitter.com/qBefBe5GPl

Terry Ried, who first played Glastonbury in 1971, and was set to play the Acoustic Stage at this year’s Festival has sadly had to cancel.

Sadly, Terry Reid has had to cancel his Sunday performance at 16:30 on the Acoustic Stage, but he will be replaced by Glenn Tilbrook.

Met Office thunderstorm weather warning will come into force at 10am on Thursday and run until midnight.

The forecasters have issued a yellow weather warning for thunderstorms across the region tomorrow (Friday, 23rd June).

A Met Office spokesman said: “Thunderstorms are likely to break out in some areas, particularly during the afternoon and early evening.

“While most places will probably miss them, where thunderstorms do occur there is a chance that in a few places up to 40 mm of rain could fall in an hour or so and 40 to 60 mm could fall in two or three hours.

“These torrential downpours may be accompanied by frequent lightning, whilst gusty winds and hail may also affect a few places.

“The exact location of the thunderstorms will be hard to pinpoint, so the warning area will be kept under review and updated if necessary.” 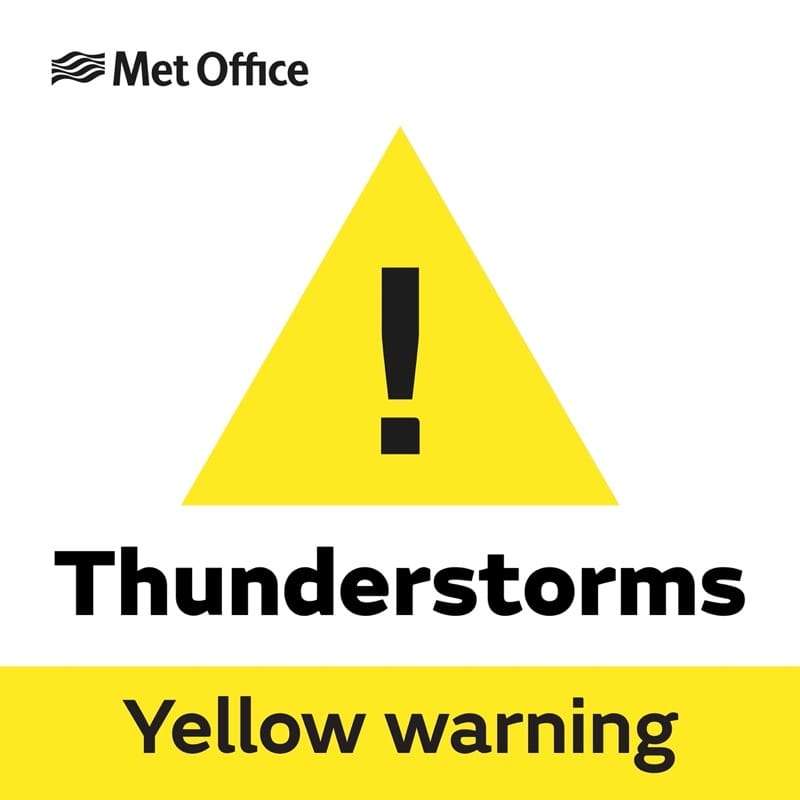 There are over 500 taps, new water bars & all water is drinking water. There will always be water available…

We’re here at @glastonbury festival keeping everyone hydrated, from the moment you arrive at the queue, during unforgettable experiences until the moment you leave us.

There are over 500 taps, new water bars & all water is drinking water. There will always be water available.💧 pic.twitter.com/CkdwHZL5II

With the main stages not kicking off until Friday, a spread of smaller venues have a breadth entertainment on show throughout Wednesday and Thursday – as seen in the video below, of what might be the first live music of Glastonbury 2022?

First live music of Glastonbury 2022? Chad and Are starting us off with a bang. pic.twitter.com/L2twNWevSn

While queuing, someone has spotted a piece of street art from what looks like to be a Banksy’s artwork – originally created for the Festival back in 2010.

Looks like Banksy has paid a visit to Glastonbury #Glastonbury2022 pic.twitter.com/GyTSImUMJ5

Glastonbury officials have shared some information and tips for those standing in line under the sweltering sun.

The last time the Festival had shared such advice was back in 2019, which was one of the hottest editions of Glastonbury to date.

Although there has been some confusion as to the opening time of the Glastonbury Co-op store opening times – we can confirm, as seen in the image below, that it WILL open at 12 noon on Wednesday (22nd June), and then again from 7am – 3am for the rest of the Festival. 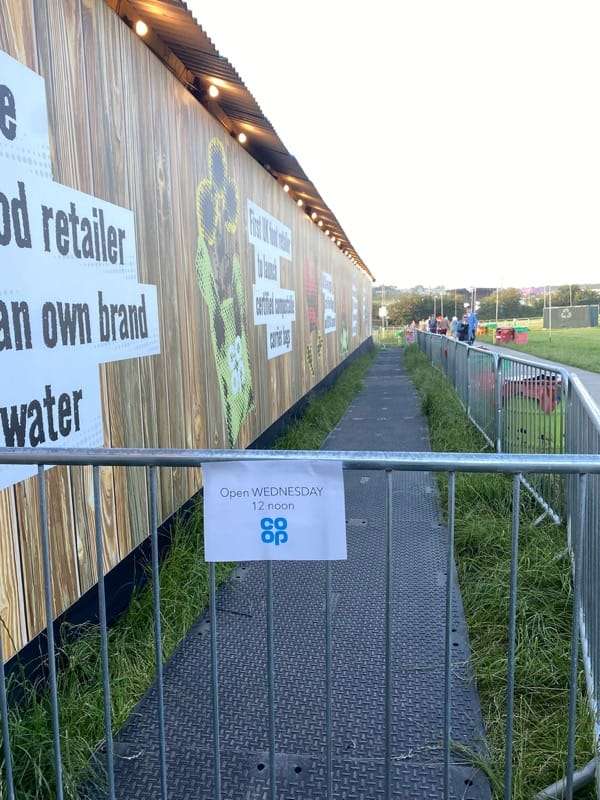 Broadcasting live from #glastonburyfestival on @BBC6Music in my incredibly stylish OB kit pic.twitter.com/OVNwpgwPBf

The official Glastonbury Twitter account has shared this video of Michael Eavis welcoming arrivals at his traditional early Wednesday spot at Gate A.

ITV West Country Reporter Max Walsh has shared an image of Michael Eavis in his iconic red Land Rover by Gate A ahead of its opening.

Both Gates A and D have now opened to be followed shortly by the rest.

@glastonbury Gate A is awake and shuffling up to make room for the queue already back to the Bronze car park.@GlastoFestFeed @Glastopia @glastobation #Glastonbury2022 #glastonburyfestival pic.twitter.com/D9U3UkK5FH

Sun is nearly up at Glastonbury Gate D !!! pic.twitter.com/fx9WRR1qAe

The Postcard Stall, which has been at Glastonbury since 1981, is ready for you.

At GlastoPostcards you can buy a postcard, a stamp, write your card and post it in our box.

Twice a day they leave the festival on their bicycle to meet a Royal Mail van and send festival tales across the world.

Can’t wait to see you all tomorrow / over the weekend. We are ready for you! 📮❤️ pic.twitter.com/tF39MdpCjv

The Daily Star reports of a ‘huge puma’ that has been seen lurking in trees near the Festival’s Glade area.

Although Wednesday and part of Thursday are expected to remain sunny and hot, there’s now an ever-growing chance of heavy rain showers and thunderstorms on Friday.

Met Office Deputy Meteorologist Helen Caughey said: “There is a risk of heavy showers and thunderstorms in the Glastonbury area on both Friday and Saturday, although these should be quick moving, some surface water might accumulate at times. Temperatures will start to dip as we go through the end of the week returning to near normal for the time of year, with highs likely around 18-20C.

“Sunday is expected to be mostly dry and bright at first but with showers once again developing through the morning, some of which could be heavy, and possibly thundery. The unsettled pattern is expected to continue to dominate into the start of next week.”

We’ll see you in the morning… #Glastonbury2022 pic.twitter.com/y7mFfGySru

BBC Radio Somerset presenter and all around Glastonbury champion, Andy Bennet, shares this image from the queue…

The overnight queues are getting longer outside of the main gate 🔼

The family at the front say they have plenty of gin to get them through the night! 😝 🍸#Glastonbury #GlastonburyFestival pic.twitter.com/3Zk8SPlxif

Travel Somerset have issued a warning reminding people attending Glastonbury not to park in the clearway area around the festival, otherwise they will be ticketed and removed.

📸 Heading to #Glastonbury2022? The queue is building from Shepton Mallet with a 57-minute delay currently. Here’s the scene! 👇

Car parks have now opened allowing Festival-goers to arrive throughout the night, when traffic volumes are low.