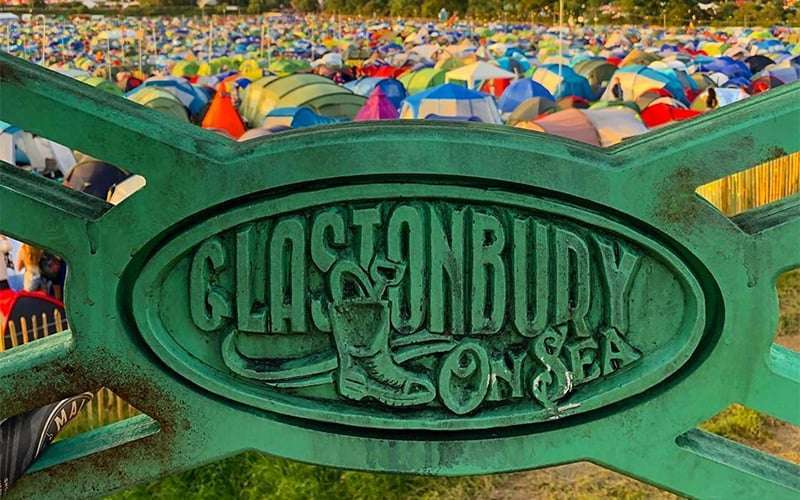 Glastonbury founder Michael Eavis has revealed that Glastonbury-on-sea will be returning for the festival’s 50th-anniversary in 2020, while sharing some new details about the planned improvements to the attraction in the form of a sea of pre-pitched tents.

Replacing the need for Glasto-goers to bring their own tent, they will now be able to rent one of the pre-pitched tents surrounding The Pier prior to the event, which apart from being very convenient, will also further help reduce campsite waste.

The 60-meter-long “Victorian” pier aka Glastonbury-on-Sea was designed by long-time Glastonbury creative partner Joe Rush, who based the design on Llandudno pier in North Wales.

Keeping with the seaside theme, the tents are said to be represented in the colours of blue and white, with the artistic aim of making them appear to be an ocean around Glastonbury-on-sea’s Victorian pier, when seen from a distance.

Only around 100 of these pre-pitched blue and white tents will be available to the public, and they will be joining a range of other pre-pitched options available at the festival, including the Tipi Village and Worthy View.

Speaking to Bristol Live earlier this week (August 25), Michael Eavis said: “There’s going to be a sea of blue and white tents around it which will look just like the ocean from afar.

“People will be able to rent them out before the event so they don’t need to bring a tent with them. That sounds pretty good, doesn’t it?

“There will only be about 100 of these tents, so enough for about 300 people all in all. It’s going to look great.”

Eavis added: “The pier was excellent this year, really excellent, and next year it’s going to be even better.”

In addition to also revealing Wolf Alice as the first band to be confirmed for Glastonbury 2020, and that a “big, big band” is set to reform especially for this year’s Pilton Party (who’s identity would be revealed at 6am on the day of the event – September 6, 2019) – Michael Eavis also confirmed that all of Glastonbury 2019’s new attractions, such as The Pier and the latest edition of Block9 with its new arena, will be returning for Glastonbury 2020 – saying: “I genuinely think 2019 was the best Glastonbury ever and it’ll be very very difficult to run a better one.

“There was so much stuff we did which we probably should have saved for next year, to be honest.

“We almost treated this year like the 50th anniversary.

“I’ve never done a show as good as this one and if people are expecting more next year, they should forget it!”.