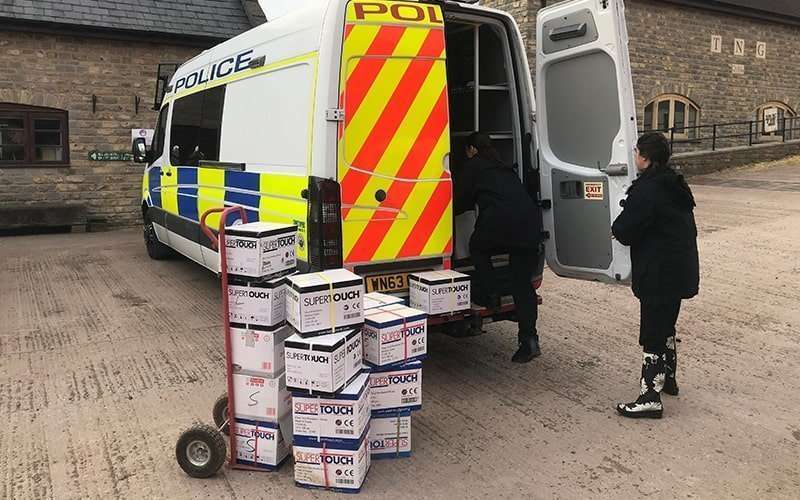 Hand sanitiser, gloves and face masks set for Glastonbury 2020 have all been donated by the Festival to frontline emergency services – including Avon and Somerset Police and NHS staff

Glastonbury founder Michael Eavis, and his daughter and Festival organiser Emily Eavis have donated all the supplies that were meant to be used for Glastonbury 2020 to emergency services in response to the coronavirus pandemic.

This follows the sad news of Glastonbury Festival’s being forced to cancel its 50th-anniversary celebrations due to the ongoing COVID-19 pandemic.

Frontline emergency services including Avon and Somerset Police and NHS staff received thousands of litres of hand sanitiser, gloves and face masks – all of which were meant to be used at Glastonbury’s 50-anniversary celebration this summer.

Avon and Somerset Police posted images on Twitter showing a tractor placing supplies into a van, as well as a police vehicle being loaded with boxes of medical-grade gloves – saying: “On behalf of the A&S Local Resilience Forum we’d like to extend a huge thank you to Michael & Emily Eavis for providing frontline emergency service workers & NHS staff with thousands of litres of hand sanitiser, gloves & face masks due to be used Glastonbury 2020. #SafeTogether”

On behalf of the A&S Local Resilience Forum we’d like to extend a huge thank you to Michael & @emilyeavis for providing frontline emergency service workers & NHS staff with thousands of litres of hand sanitiser, gloves & face masks due to be used @glastonbury 2020. #SafeTogether pic.twitter.com/D5UqUZmMS5

The legendary Festival was set to be held at Worthy Farm in Pilton, Somerset – from Wednesday, June 24 through Sunday, June 28 – after the line-up poster and first wave of artists was released earlier this month (March 12) which included Diana Ross, Paul McCartney, Taylor Swift, Lana Del, Kendrick Lamar and many more.

The statement made last week (March 18), from Michael and Emily Eavis, read: “We are so sorry to announce this, but Glastonbury 2020 will have to be cancelled, and this will be an enforced fallow year for the Festival.”

“Clearly this was not a course of action we hoped to take for our 50th-anniversary event, but following the new government measures announced this week – and in times of such unprecedented uncertainty – this is now our only viable option.”

They added: “We very much hope that the situation in the UK will have improved enormously by the end of June. But even if it has, we are no longer able to spend the next three months with thousands of crew here on the farm, helping us with the enormous job of building the infrastructure and attractions needed to welcome more than 200,000 people to a temporary city in these fields.

“We would like to send our sincere apologies to the 135,000 people who have already paid a deposit for a Glastonbury 2020 ticket.”