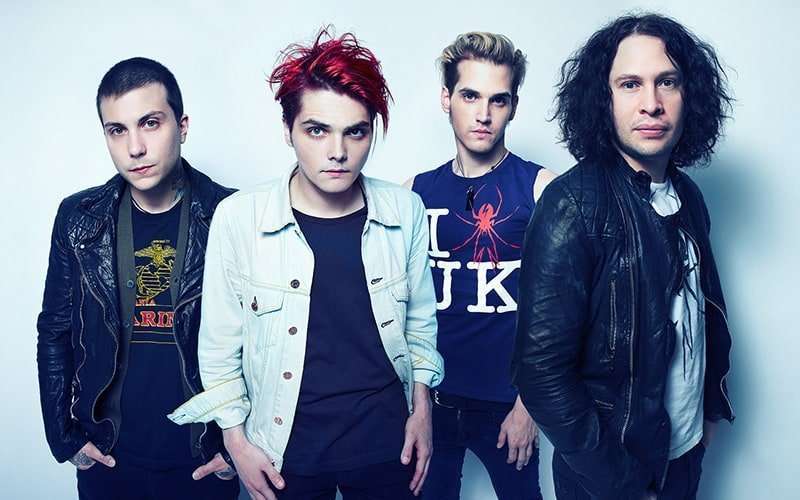 My Chemical Romance have just shared a cryptic message via their socials, of what appears to be their upcoming UK tour dates, with some fans suggesting that a Glastonbury Festival performance could also be on the cards later this summer.

Following their split back in 2013 – the American rock band had recently played their first show in LA in December since reuniting last year.

Taking a closer look at the gif posted by the band’s official Twitter page – the short visual features a quick glimpse of the Union Jack alongside what appears to be an interpretation of the Glastonbury Tor, in addition to detailed characters from the Theban alphabet – which fans were quick to decipher as spelling out the word ‘June’.

from what i understand so far, these are all of the symbols used (in that order) pic.twitter.com/K4hROo1FG1

Ok so some have used the thebian alphabet to deduce it spells June.

Does this look like Glastonbury Tor to anyone else? pic.twitter.com/lsJEyLIkNv

Some other speculations say that the castle tower depicted in the visual might be the one right inside the entrance to Donington Park, also known as the location of Download Festival.

I’m just here to plop this single ass castle tower that is RIGHT INSIDE THE ENTRANCE TO DONINGTON PARK aka download location (yes I went on Google Street view shhh) pic.twitter.com/laW1oIqvKO

As always, with Glastonbury Festival you just never know, and to be 100% certain we would obviously have to wait for the official announcement on this when it comes – That being said, if indeed confirmed, one could assume MCR might perhaps fit nicely with what Glastonbury organiser, Emily Eavis, said earlier last year in regards to the Other Stage having “Pyramid-level headliners” for Glastonbury’s 50th anniversary in 2020.