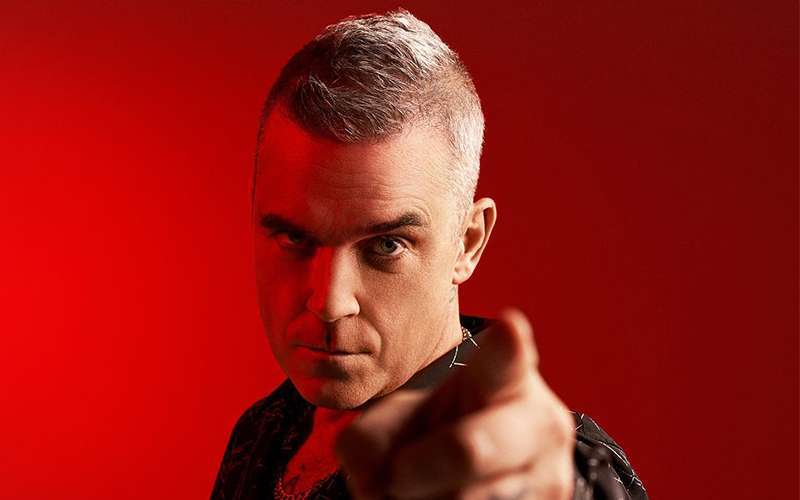 UPDATE SECTION:
Since the publishing of this article, Robbie Williams is said to have “only two UK shows next summer” – with Glastonbury most probably not being one of them… Click here to read more.

Robbie Williams has said he’d like to return to Glastonbury Festival to play the coveted Sunday  Teatime Legends Slot.

The pop star, who released his record-breaking ‘XXV’ compilation earlier this month after celebrating 25 years as a solo artist, hasn’t played at the Worthy Farm-held event since he made his debut appearance at the iconic festival back in 1998.

During a recent interview with BBC Breakfast, Williams was asked whether he’d be up for making a Glasto-comeback in the form of a Legends Slot performance, to which the Angels star replied: “Yeah, I’d like another go-round on that stage and feel that audience and get the chance to do it.”

BBC Breakfast entertainment correspondent, Colin Paterson, then pointed out that Spice Girls’ Mel C had already mentioned the girl group’s name earlier in the year as a possible contender for the 2023 Legends Slot – “Oh, really?” Williams responded, While adding: “The Spice Girls trumps a Robbie Williams, so maybe I’ll have to wait.”

When asked why it would mean so much to him to play Glastonbury again, Williams said: “It is the epicentre of the music world for that weekend”. You can see a clip of the interview in the tweet below.

Along with Robbie Williams, some of the big-name acts to be rumoured for a possible performance at Glastonbury 2023 so far include the Spice Girls, Arctic Monkey, Elton John and most recently Roxy Music – who are speculated to be strong contenders for playing the coveted Sunday afternoon Legends Slot at next year’s Festival.

To learn about registration, the ticket sale process and how you can maximise your chances of getting Glastonbury 2023 tickets, click here.

It’s also worth remembering that in addition to the ticket sales, some other opportunities for getting to Glasto include entering competitions, working and/or volunteering at the Festival – once those options make themselves available.